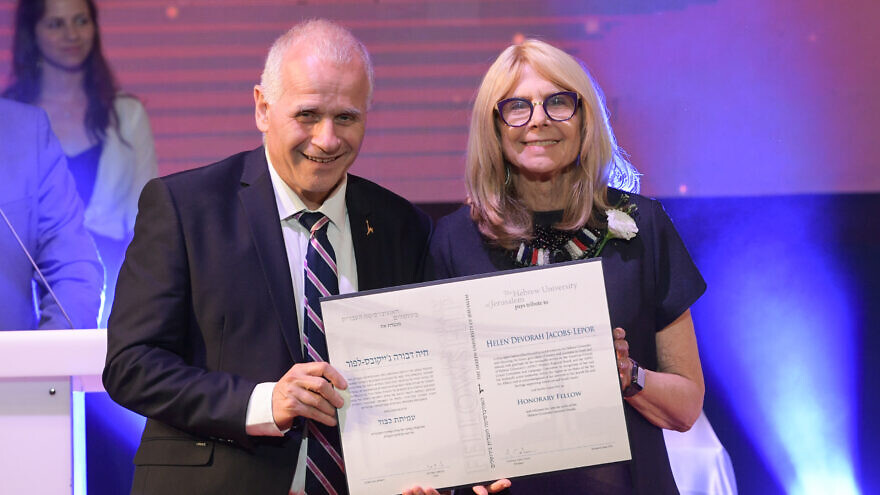 The Hebrew University of Jerusalem (HU) presented an Honorary Fellowship to prominent executive and Jewish leader, Helen D. Jacobs-Lepor, during the 85th Board of Governors Meeting in Jerusalem, Israel.

Mrs. Jacobs-Lepor serves on the Board of Managers for U.S. Medical Innovations, LLC, a privately held FDA-registered biomedical device company focusing on the fields of plasma electrosurgical devices, robotic mini-invasive technology, and the eradication of cancer using cold plasma. She previously served as president of several U.S. subsidiaries of Austram, Inc., an Australian publicly traded entity, for 15 years.

Mrs. Jacobs-Lepor has been a supporter of HU for nearly two decades. She is deeply committed to the American Friends of the Hebrew University (AFHU), where she serves on the Western Regional Board, the Campaign Committee, the National Board of Directors, and the AFHU Grants Committee. In addition, she and her husband, Dr. Norman Lepor, are active leaders within the region, and have served as longtime co-chairs of AFHU’s annual Bel Air Affaire.

Paying tribute to the honorees, HU President Asher Cohen said “We welcome Helen Jacobs-Lepor into the ranks of the Hebrew University Honorary Fellows. She is one of a highly select group of esteemed individuals who have demonstrated exceptional leadership, philanthropy, and advocacy in support of Israel and the cause of higher education.”

“I am thrilled to receive this Honorary Fellowship from the Hebrew University of Jerusalem,” said Mrs. Jacobs-Lepor. “As an avid supporter of the university through my work with its American Friends, I am proud to support university programs, especially scholarships through co-chairing the Bel Air Affaire for the last 13 years, which has raised nearly $13 million for scholarship funds. I believe scholarships are a wise investment in students who will help improve the lives of people worldwide, and who will be the national leaders working to secure Israel’s bright future. I am especially honored to receive this fellowship among Hebrew University’s distinguished cohort of recipients.”

Mrs. Jacobs-Lepor’s devotion to Jewish life and heritage extends to the next generation of Jewish leaders. She and her daughter, Marissa, along with three other mother-daughter pairs, co-founded Remember Us: The Righteous Conversations Project, which has been recognized by the Slingshot Foundation as one of the most innovative charitable organizations in Jewish life today.

Mrs. Jacobs-Lepor has served on the boards of, and continues to support, many charitable organizations including the Holocaust Museum Los Angeles, Holocaust B’nai Mitzvah Project, Foster Care Counts, Save a Heart Foundation, and American Friends of the Chaim Sheba Medical Center at Tel Hashomer.

Born and raised in Los Angeles, Mrs. Jacobs-Lepor received her Juris Doctorate from UCLA School of Law, as well as her bachelor’s degree from UCLA. She was an editor of the UCLA Law Review and won the American Jurisprudence Awards in both Real Property and Contracts.

The Hebrew University of Jerusalem is Israel’s leading academic and research institution. Serving 24,000 students from 80 countries, it produces a third of Israel’s civilian research and is ranked 12th worldwide in biotechnology patent filings and commercial development. Faculty and alumni of the Hebrew University have won eight Nobel Prizes and a Fields Medal since 2000. For more information, visit https://en.huji.ac.il/en.

About American Friends of the Hebrew University

American Friends of the Hebrew University (AFHU) is a national, not-for-profit organization based in the United States. AFHU is headquartered in New York, and has seven regional offices working in close partnership with the Hebrew University of Jerusalem. AFHU provides supporters, Hebrew University alumni, and the public with stimulating programs and events, and organizes missions to Israel. The organization’s activities support scholarly and scientific achievement at HU, create scholarships, fund new facilities, and assist the university’s efforts to recruit outstanding new faculty. 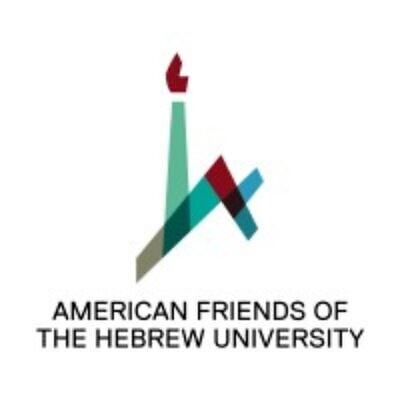 American Friends of the Hebrew University
Publish your organization's press release on JNS Wire
Releases published on the JNS Wire are communicated and paid for by third parties. Jewish News Syndicate, and any of its distribution partners, take zero responsibility for the accuracy of any content published in any press release. All the statements, opinions, figures in text or multimedia including photos or videos included in each release are presented solely by the sponsoring organization, and in no way reflect the views or recommendation of Jewish News Syndicate or any of its partners. If you believe any of the content in a release published on JNS Wire is offensive or abusive, please report a release.
Never miss a thing
Get the best stories faster with JNS breaking news updates