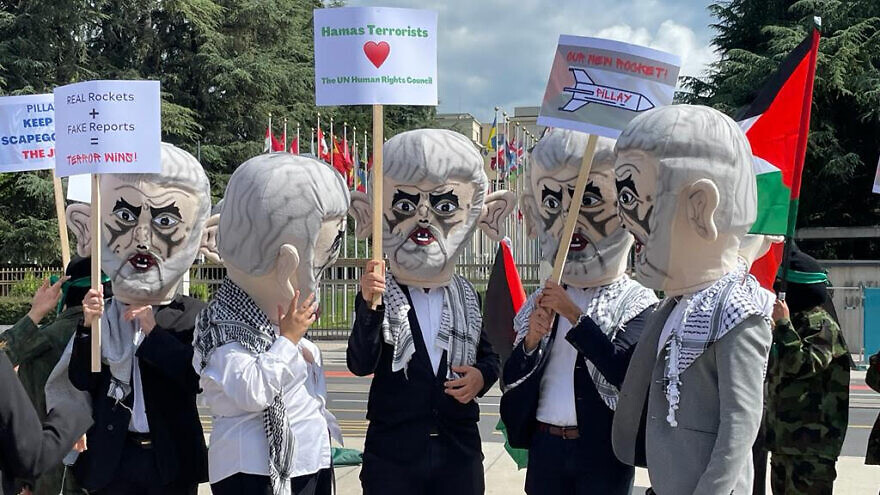 (July 27, 2022, Jerusalem, JNS Wire) In a letter sent this week to Professor Deborah Lipstadt, Special Envoy to Monitor and Combat Anti-Semitism of the State Department, the Tel Aviv-based Shurat HaDin Law Center is pressing the United States to urgently investigate the United Nations Human Rights Council (UNHRC) for anti-Semitism. According to Shurat HaDin, the UNHRC is an inherently anti-Semitic organization, obsessively engaged in spreading blood libels, false allegations and delegitimizing the Jewish state by reviving the banner of “Zionism is Racism.” In their letter, the Israeli lawyer’s organization asks the U.S. to formally label the UNHRC as a hate group.

The U.S. Congress established the Office to Combat Anti-Semitism in 2004. It is officially charged with monitoring, reporting and fighting overseas hatred of the Jews. This is the first time it has been called upon to investigate a U.N. agency.

The UNHRC, led by some of the world’s most notorious human rights violator regimes, has long been known for its obsession with Israel. Permanent ‘Item #7′ in the UNHRC council’s agenda requires the UN body to discuss alleged Israeli human rights violations in every session of this council. No other state in the world – including Russia, Syria or Afghanistan – has earned this “status.”

In an alarming escalation of its anti-Israeli activity, the UNHRC has recently appointed “The United Nations Independent International of Inquiry (COI) on the Occupied Palestinian Territory, including East Jerusalem, and in Israel” headed by Ms. Navi Pillay, (“The Pillay Commission”). The COI is a permanent committee established solely to investigate Israel and condemn it as a human rights violator and war criminal. This notorious COI, says Shurat HaDin’s letter, takes the UNHRC hostility to an extreme: Its mandate – based on a controversial resolution which no democratic country supported – stretches far from the latest armed conflict in Gaza it was supposedly meant to investigate, deep into the borders of Israel, looking back to the establishment of the Jewish state in 1948, all with one clear mission: delegitimizing Israel’s right to exist as a Jewish state by labeling it as an “apartheid state.”

In the letter to the State Department, Shurat HaDin argues that the UNHRC is deeply infected with anti-Semitism and should be regarded one of the largest perpetrators of Jew hatred internationally.  The agency’s obsession with Israel, the themes and motives that guide the UNHRC and its actions portray numerous indications of anti-Semitism according to the internationally accepted IHRA definition of anti-Semitism, including: the demonizing of Israel, blaming Israel for all inter-religious or political tensions, denying the Jewish people their right to self-determination, denying Israel the right to exist, applying double standards towards Israel by requiring it a behavior not expected or demanded of any other democratic nations and many more.

Shurat HaDin wants Special Envoy Lipstadt to open a permanent investigation of the UNHRC to monitor its actions and determine the cause of its extremist policies and irrational targeting of the one Jewish state.

“The UNHRC has become a focal point of spreading hatred and blood libels against the Jewish state and its actions cast a shadow on the safety and the wellbeing of the Jewish people around the entire world. The US State Department has the mandate to investigate and report on this extremist agency,” says Nitsana Darshan Leitner, the president of Shurat HaDin. “When it looks like anti-Semitism and when it sounds like anti-Semitism – it is anti-Semitism, and should be urgently dealt with as such, as there is nothing more dangerous than an entity which was entrusted with safeguarding human rights, that has become rotten from the inside and turned into a racist monster. We are calling on Special Envoy Lipstadt to utilize her office to monitor and combat the extremist UNHRC.”

Republish this article
About The Publishers
Shurat HaDin
Israeli civil rights organization, Shurat HaDin-Israel Law Center, has been leading the legal fight against Israel’s enemies in the courts worldwide. Alongside the Israeli security services, it has combated terror financing, the BDS movement, those who accuse the IDF of war crimes and a multitude of lawfare threats against the Jewish State, by utilizing civil litigation.
Publish your organization's press release on JNS Wire
Releases published on the JNS Wire are communicated and paid for by third parties. Jewish News Syndicate, and any of its distribution partners, take zero responsibility for the accuracy of any content published in any press release. All the statements, opinions, figures in text or multimedia including photos or videos included in each release are presented solely by the sponsoring organization, and in no way reflect the views or recommendation of Jewish News Syndicate or any of its partners. If you believe any of the content in a release published on JNS Wire is offensive or abusive, please report a release.
Never miss a thing
Get the best stories faster with JNS breaking news updates