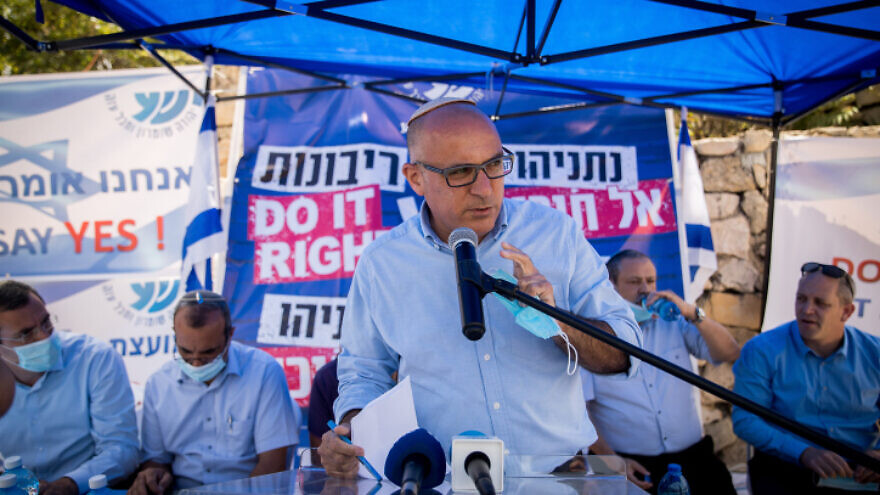 Yigal Dilmoni, CEO of the Yesha Council at the protest tent for Israeli sovereignty in the Jordan Valley, Judea and Samaria and against the current plan outside the Prime Minister's Office in Jerusalem on June 21, 2020. Photo by Yonatan Sindel/Flash90
Republish this article
1380 WORDS
Spread the word.
Help JNS grow!
Share now:

(April 8, 2022 / JNS) The Yesha Council, an umbrella group of municipal assemblies in Judea and Samaria, has opened a drive against Israel’s government over an unofficial building freeze, for which they hold Israeli Defense Minister Benny Gantz responsible.

“Given this reality, the government has no right to exist and should be toppled,” said Yesha Council chairman David Elhayani at a March 27 press conference.

The last time the Yesha Council announced an open campaign against an Israeli government was 16 years ago when Ehud Olmert was prime minister. Although Olmert hailed from the political right, this declaration of hostilities carries greater irony as the government is led by one of their own, Naftali Bennett, former CEO of the Yesha Council.

In Israel proper, the Ministry of Housing and Construction manages building and planning. Not so east of the Green Line—an armistice line separating Israel from territories it captured during the 1967 Six-Day War, areas that were never annexed. Those territories fall under an entity called the Civil Administration, itself under the Coordinator of Government Activities in the Territories (COGAT), a unit of the Ministry of Defense. Gantz stands at the head of that ministry.

The Yesha Council claims that Gantz has meddled with the Civil Administration’s Higher Planning Committee, which normally meets four times a year, or every three months, to approve building plans in Judea and Samaria. The last time it met was in late October, when it approved several thousand housing units. Dilmoni said that even at that meeting, the committee didn’t approve all the plans before it.

Visiting Judea and Samaria, building and construction seems like it’s going on everywhere, but Dilmoni said this is deceptive. He said it takes a long time to get plans approved, noting that he just started making improvements to his own home—a process he started 10 years ago. He said any break in planning has long-term effects. “If you stop planning and building in Judea and Samaria, it’s not only for now; it creates problem for years,” he said.

The Yesha Council’s long-term goal is to double the Jewish population of Judea and Samaria to 1 million. Dilmoni said it can be done in 20 years, but not if the government imposes building freezes.

Neither the Ministry of Defense nor COGAT responded to JNS’s requests for comment. And publicly, at least, Gantz has remained silent about the freeze.

‘We want the fall of the government’

Omer Dostri, an Israeli national security expert and political columnist, told JNS that Gantz is driven by domestic considerations and his vision for the region.

“In recent years, and in the last year in particular, Defense Minister Benny Gantz has been trying to position himself politically as the leader of the left-wing camp in Israel, and diplomatically as the one who forges a strategic-political alliance of all the ‘moderate forces’ in the region. In this alliance, Gantz includes a special and central status for the Palestinian Authority, as well as for Jordan and Egypt,” he said, adding that Gantz believes that “strengthening relations with the Palestinians and Jordanians will contribute to security and political stability, and will also strengthen his electoral power.”

Fueling the Yesha Council’s anger is its feeling of betrayal. At the March 27 press conference, Elhayani, who had backed the government by throwing his support behind the New Hope Party led by Justice Minister Gideon Sa’ar, referred to the freeze as a violation of coalition agreements. “Prime Minister Bennett told us that they’ll keep the status quo—meaning what was in the past will be in the future, a building and planning meeting every three months,” explained Dilmoni.

“We decided that we’ll no longer sit in our houses and watch as Gantz slowly chokes off our air. We want the fall of the government and elections,” he said.

Dilmoni is confident that the Yesha Council has the leverage, saying it “is a very strong organization.”

“The government knows it,” he said, adding that Bennett’s Yamina Party draws its support from Judea and Samaria, and its members, like Interior Minister Ayelet Shaked, won’t be able to stand up to the pressure. “Until now, we have not said a thing against Yamina, but if we start to speak against them, slowly, we can make them vote against this government.”

Dostri conceded that right-wing elements in the coalition are vulnerable, saying their voter base “comes almost entirely from religious Zionism and supporters of the settlements.”

“The Yesha Council can call on residents and right-wing activists to go out in large demonstrations, and even put enormous pressure on Bennett, Shaked and Sa’ar by renouncing them and calling for their resignation,” he said.

Dilmoni, who worked as Bennett’s deputy at the Yesha Council, noted the irony that in 2010, it was Bennett, as council CEO, who led the charge against then-Prime Minister Benjamin Netanyahu, who enacted a 10-month settlement freeze to placate U.S. President Barack Obama.

“Something has changed in his mind. It’s reflected by when he said ‘West Bank’ when standing next to the U.S. Secretary of State,” said Dilmoni, referring to a March 27 press conference when Bennett used the term, which is rejected by settlement supporters, to refer to Judea and Samaria while alongside U.S. Secretary of State Antony Blinken. (Bennett’s office dismissed it as a one-time slip-of-the-tongue.)

He ascribed deeper meaning to it, saying it’s another sign of an ideological change in the prime minister.

‘Political capital ahead of the next election’

Dostri said that it’s possible that Bennett is shifting from his principles, a process that may have begun when he agreed to form a government with “far-left elements such as Meretz and with the United Arab List (Ra’am)—a party affiliated with the Muslim Brotherhood.” Though Dostri points out that even if Bennett remains fully aligned ideologically with the settlements, the fact that he only has a small number of Knesset seats means he could do little to stop Gantz from acting as he pleases.

He predicts that the current crisis will end with a compromise between Bennett and Gantz, in which construction planning in blocs of settlements, like Ariel and Ma’ale Adumim, will restart while a “quiet” freeze will continue in the other areas of Judea and Samaria.

“As long as Bennett continues to serve as prime minister, I do not see a situation where anyone in the government gets up and goes. It is possible that as soon as the baton is transferred to Yair Lapid, or at a slightly earlier stage, some right-wing member of the coalition will overthrow the government in an attempt to ‘save his skin’ and thus earn political capital in the right-wing camp ahead of the next election,” he said.

It appears that “earlier stage” just happened with the dramatic announcement on Wednesday by Knesset Member Idit Silman of Yamina that she is quitting the government. She is the second member of Bennett’s party to drop out, bringing the number of Yamina members still supporting the coalition to just five, and, more importantly, robbing the government of its majority.

Her resignation may have an immediate impact on the silent settlement freeze as another Yamina member, Nir Orbach, on Thursday directed an ultimatum at the prime minister. Among his demands, (made under the threat that he would otherwise quit the coalition): an end to the building freeze.

The Yesha Council praised Orbach in a statement on Thursday, saying: “We congratulate and support MK Nir Orbach on his decision to work for the abolition of the freeze … if there is a freeze, there is no government. The continued development of Judea and Samaria is a national interest on the basis of which the current government was formed. Until the Higher Planning Committee convenes and the housing units that have already been approved are not published, we will continue the struggle and continue to work for the dissolution of the government.”