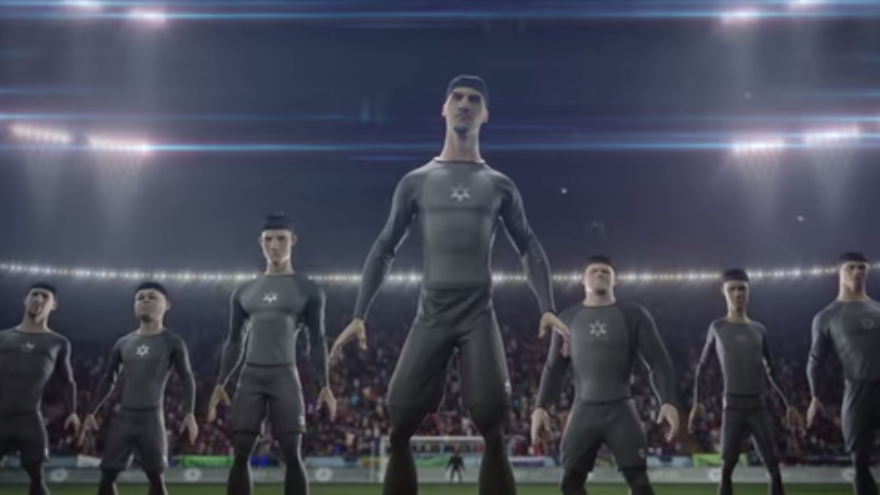 Nike maintains that the logo of the clones' uniforms in the pictured promotional video was only intended to be a soccer ball, but critics say it is virtually identical to a Star of David. Credit: YouTube screenshot.
Republish this article
984 WORDS
Spread the word.
Help JNS grow!
Share now:

(October 12, 2014 / JNS) After initially raising concern on the issue this summer, the Zionist Organization of America (ZOA) is continuing to press the Nike footwear and apparel giant to remedy its promotion of a pre-World Cup animated video whose content has what critics call anti-Semitic overtones.

ZOA initially wrote to Nike on July 2, and after receiving what it considered an unsatisfactory response, sent a Sept. 18 follow-up letter to Nike that has yet to be answered. While Nike has defended the advertisement (called “The Last Game”) based on arguments that it had no intention to offend Jews and that the ad is no longer appearing on television, ZOA is asking the company to publicly apologize for the video, remove it from the public domain, and take other steps that would fall in line with how Nike addressed a past episode that offended the Muslim community.

“The video—which sends the message to ‘Risk Everything’—features animated international soccer stars competing against evil clones who have taken over the sport,” ZOA National President Morton A. Klein and Susan Tuchman, director of ZOA’s Center for Law and Justice, wrote in their most recent letter to Nike. “These evil clones are wearing uniforms with a logo virtually identical to the Jewish Star of David. Star-of-David-like images are also depicted throughout the video, including a white rectangle with a Star-of-David likeness in the center, strongly resembling the Israeli flag (without the stripes). Whether intended or not, Nike is promoting a message that is deeply offensive to the Jewish community—that Jews and Israel are evil and that one should ‘risk everything’ to defeat them.”

Others who have objected to the Nike video include the Israeli Knesset, the World Zionist Organization, and general viewers.

In their July letter, the ZOA officials wrote to Nike Chairman Philip H. Knight and President & CEO Mark Parker that “some of the animated soccer stars in the video—i.e., the ‘good guys’—are wearing shirts with a ‘Fly Emirates’ logo and a ‘Qatar Airways’ logo, which must mean that these Arab airlines co-sponsored the video. It is no secret that the United Arab Emirates and Qatar have a deeply troubling history of anti-Semitism and hostility to Israel.”

Nike issued two responses to ZOA’s first letter. In the first, on July 15, it wrote to Klein that it would forward his comments “to our Advertising Department for their consideration.” Then on July 28, Pierre-Laurent Baudey—Nike’s vice president of global football brand marketing—wrote to Klein and Tuchman that the logo shown on the clones’ player uniforms is a soccer ball, and that its resemblance of any other image is “entirely coincidental and unintentional.” Baudey wrote that Nike “never intended any disrespect” and that it understands “the concerns of the Jewish community.” The ad is “no longer being run on TV or in cinemas,” stated Baudey, who did not describe any actions Nike plans to take regarding the video.

“We have raised your concerns with our creative teams and Nike will be more vigilant in our oversight of graphics and images used in our campaigns,” wrote Baudey. “In this instance we can confirm our designers were focused on producing a graphic that represented a football and that there was no ill intent.”

In response, Klein and Tuchman wrote Baudey in a Sept. 18 letter that they were “taken aback” by his “indifferent response” to their concerns about the ad’s anti-Semitic content.

In both of their letters, ZOA officials proposed that Nike take the following steps to remedy the situation: issue a public apology to the Jewish community; remove the ad from the public domain; permanently cease using any image or symbol that resembles the Star of David or any other Jewish symbol; implement organizational changes in its design department to tighten scrutiny of logo designs; investigate how an image of the Star of David came to be used; and issue a public statement that delineates “all the remedial steps that have been and will be taken to remedy the harm that Nike has caused.”

In 1997, when the Muslim community objected to a logo on a line of Nike sneakers because the logo was perceived to resemble the word “Allah,” Nike publicly apologized to Muslims for any unintentional offense, agreed to recall all products carrying the design, introduced training for Nike designers in Islamic imagery, and agreed to investigate how the design came about.

Going even further, Nike agreed to build three playgrounds for Islamic communities in the U.S., at locations determined by the Council on American-Islamic Relations.

ZOA said that while it isn’t asking for the construction of any playgrounds in Jewish communities, it expects Nike “to show the same concern about having offended the Jewish community, as it showed when the Muslim community was offended by Nike’s actions.” ZOA told Nike it would give the company 15 days to respond to the Sept. 18 letter, which to date has not been answered.

“We urge Nike to stop treating this matter without the sensitivity and concern it deserves,” Klein and Tuchman wrote. “Otherwise, we will be compelled to notify the public by articles, letters, and even advertisements, and to call on consumers to stop purchasing Nike products.”

“You would have never seen this [kind of offensive ad] a year or two ago in America,” he added.

Nike did not return a request for comment from JNS.org.