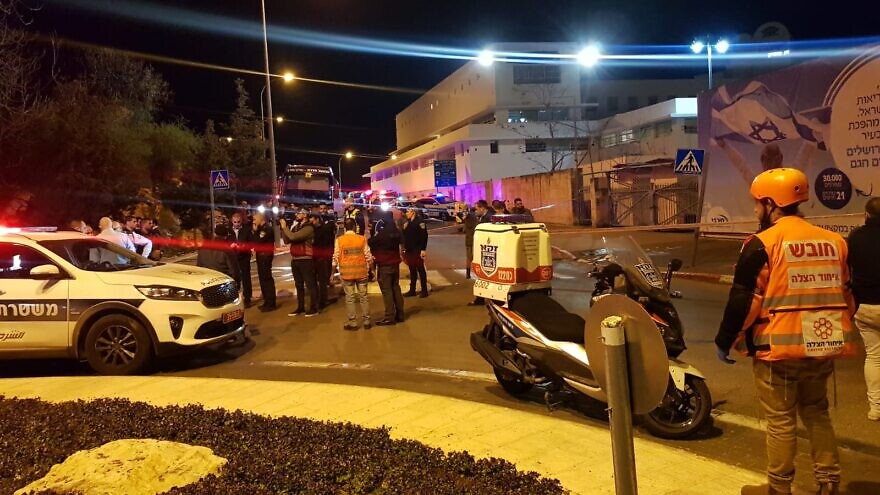 (February 6, 2020 / JNS) At least 12 soldiers were wounded, one seriously, in a suspected terrorist attack in Jerusalem in Thursday morning, according to police and medical services.

The attack, a vehicular assault, occurred at 2 a.m. at Jerusalem’s First Station and is being investigated as a terror attack, according to police.

A manhunt is underway for the driver of the vehicle, who fled the scene.

The wounded troops belonged to the Israel Defense Forces’ Golani Brigade, according to an IDF spokesperson, and had been visiting the First Station, a historic Jerusalem site, as part of a “heritage tour” ahead of their early-morning swearing-in ceremony at the Western Wall.

According to a Magen David Adom spokesperson, paramedics treated the victims at the scene and evacuated them to Jerusalem’s Hadassah Ein Kerem and Shaare Zedek hospitals, including an unconscious 20-year-old man in serious condition with multiple injuries.

According to a United Hatzalah spokesperson, the emergency response organization’s Psychotrauma and Crisis Response Unit was also dispatched to the scene, where they treated eight people suffering from emotional and psychological shock.

Upon hearing of the attack, Israeli President Reuven Rivlin said, “We are praying for the recovery of the injured soldiers being treated in hospital today. I am confident the forces pursuing the perpetrator will find him soon and bring him to justice. We will not allow despicable terrorism to raise its head and will fight it without compromise.”

The incident comes as tensions have increased between Israel and Palestinians following U.S. President Donald Trump’s rollout of his Middle East peace plan.