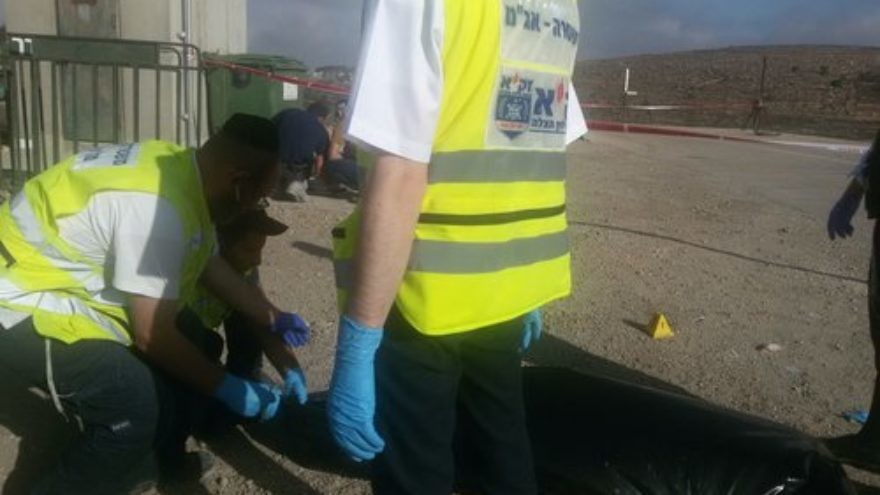 Three Israeli security officers were killed and a fourth was severely wounded by a Palestinian terrorist early Tuesday morning in the community of Har Adar near Jerusalem.

As the officers called out to the terrorist to stop approaching the community, he reached into his shirt, pulled out a pistol and opened fire at the Israelis before being shot and killed.

The slain Israelis included a Border Police officer and two private security guards, all in their 20s.

“This has been a difficult morning; three Israelis were murdered by a depraved individual,” Israeli Prime Minister Benjamin Netanyahu said, noting that while investigations were still ongoing, “we can say some things with certainty even now.”

“One—the home of the terrorist will be demolished. Two—the IDF has already cordoned off the village. Three—all work permits for members of the terrorist’s extended family are hereby revoked,” he said.

In line with the prime minister’s comments, Israeli security forces raided the terrorist’s home in Beit Surik, set up a security perimeter around the community and implemented restrictions on movement.

Netanyahu attributed the attack to “systematic incitement by the Palestinian Authority (PA), and other elements,” and said he expected PA President Mahmoud Abbas to condemn the shooting.

“The operation this morning in northern Jerusalem is a new chapter of the Jerusalem intifada and….an affirmation that our uprising youth will continue to fight until the people and land are completely liberated,” Hamas spokesman Hazim Qassim wrote on Facebook.

The Palestinian terrorist organization Islamic Jihad also lauded the attack, saying it “embodies the living conscience of the Palestinian people and cause.”

The Border Police officer killed in the attack was Solomon Gavriyah, 20, an Israeli of Ethiopian origin from the city of Be’er Yaakov. The slain security guards were Or Arish, 25, a resident of Har Adar and Yosef Ottman, 25, from the Israeli Arab community of Abu Ghosh.

“He (Ottman) was a young, quiet guy who got along with everyone. An exemplary guy….who was popular across the village,” said Issa Jaber, head of Abu Ghosh’s local council, in a conversation with The Israel Project.

“As human beings we condemn every act of violence on any side, [it] doesn’t matter if it’s Jewish or Arab. [The] fact of the matter is that the security guards were both Arab and Jews,” he said.

The seriously wounded Israeli, the 32-year-old head of security for Har Adar, was evacuated to the Hadassah Medical Center in Jerusalem’s Ein Kerem neighborhood and underwent surgery after sustaining two bullet wounds. Following the procedure, doctors said his injuries were not life-threatening and that he was in stable condition.

“In such difficult moments, our hearts go out to the families of those murdered, and we pray for recovery of those injured,” said Israeli President Reuven Rivlin. “Such a brutal terror attack once again shows the daily frontline on which our security forces stand, charged today with the most important mission—the safeguarding and defense of the citizens of Israel.”

Emergency response teams arrived at the scene soon after the terror attack, including members of Magen David Adom and volunteers from ZAKA.

“It was somewhat chaotic….There was a large police force already there and a constant stream of soldiers arriving. The soldiers started creating order, secured the area and determined who could enter the scene,” Yaacov Gelber, a ZAKA volunteer, told JNS.org.

“We got there so early that there wasn’t even authorization to remove the bodies because the identities had yet to be confirmed….ZAKA is very careful with respect to the dead,” he added.

According to Israel’s Shin Bet security agency, the terrorist was a father of four who had a government-issued permit to work in Har Adar.

The Shin Bet’s initial investigation indicated the terrorist “had significant personal and family problems, including those regarding family violence.” According to the agency, the terrorist’s wife fled to Jordan several weeks before the attack, leaving the couple’s children with their father.

In a Facebook post before he carried out the terror attack, Jamal described himself as a bad husband and said his spouse was “a good wife.”