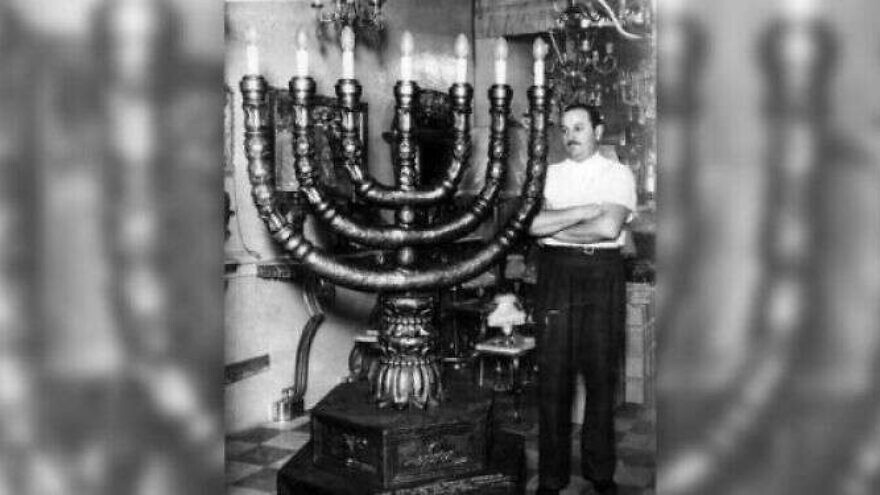 (February 21, 2022 / Israel Hayom) One of Israel’s most curious mysteries was solved on Sunday when the identity of the artist who created the small bronze menorah that stands on the Knesset grounds was finally revealed.

The Knesset Menorah is one of the most recognized and revered state symbols in Israel’s history. Israel’s parliament is home to more than one menorah statue. Most famously, a seven-branched menorah stands just outside the Knesset plaza. It towers 4.30 meters high, 3.5 meters wide (14 feet by 11.5 feet) and weighs 4 tons.

While it is known that the great menorah was designed by Benno Elkan (1877–1960) and modeled after the golden candelabrum that stood in the Temple in Jerusalem, the identity of the man who created the statue that borders the Knesset’s Rose Garden has always been a mystery.

The Knesset Press Office said on Sunday that, following a lead provided by an old newspaper clipping reporting on the arrival of a sculpture from Argentina to Haifa, curators of the future Knesset Museum have been able to name the man behind the menorah as Argentinian artist David Sabi.

Dr. Moshe Foxman Shaal told Israel Hayom that following then Knesset Speaker Yosef Sprinzak’s visit to Argentina in the i950s, the local Jewish community decided to raise funds to create a statue in the likeness of the ancient Temple menorah, with the aim of gifting it to the Israeli parliament.

The community rallied, raising enough funds to forge two statues; one was sent to Jerusalem while the other was stationed outside the Israeli Embassy in Buenos Aires, where it stood until the 1994 bombing of the embassy.

Astonishingly, the menorah was found unharmed in the rubble, having survived the collapse onto it of a four-story building.

With the identity of the man behind the Knesset Menorah finally revealed, Knesset Speaker Mickey Levy rededicated the statue, with a special plaque recognizing Sabi’s contribution.

“Identifying the artist who created the menorah is very important to us. For years, his identity was a mystery, and now it has been resolved,” said Levy.

“We are happy that David Sabi is recognized on the 70th anniversary of the menorah’s arrival [in Israel] and we are proud of the deep friendships between Israel and Diaspora Jewry.”