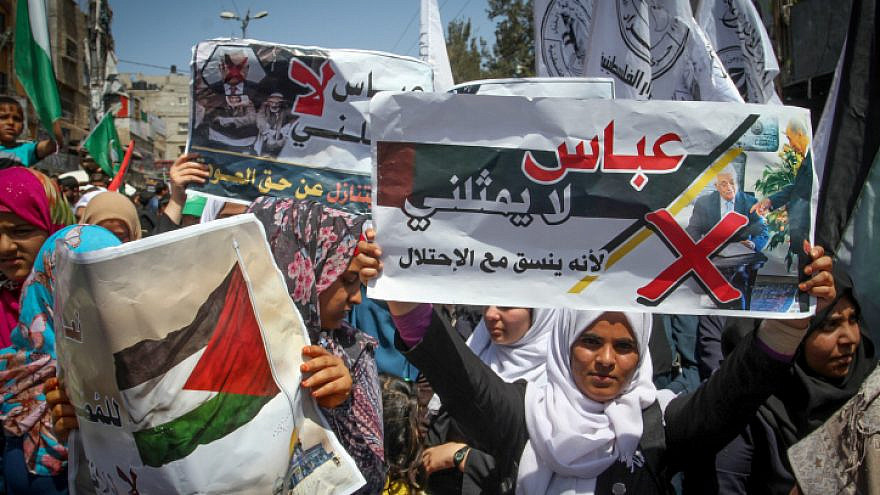 (May 6, 2021 / JNS) The decision last week by Palestinian Authority leader Mahmoud Abbas to “delay” elections to the Palestinian Legislative Council—and, by all intents and purposes, to cancel them altogether—marked the start of a new phase of deteriorating relations between the two rival movements, Israeli observers have said.

In recent days, senior members of the Hamas terror organization have stepped up inflammatory statements aimed at agitating against the Fatah-run P.A.

“Hamas has never stopped its efforts to undermine the Palestinian Authority and consolidate itself in the West Bank. And it never abandoned its military and terrorist activities,” Professor Boaz Ganor, founder and executive director of the International Institute for Counter-Terrorism at Herzliya, told JNS.

While Hamas is a pragmatic movement and its policies—unlike its fundamentalist ideology—change from time to time in line with certain needs and conditions, it has never swerved from its goal of infiltrating and taking over the West Bank, he said.

Hamas’s fixed aspiration following its forceful 2007 takeover of the Gaza Strip, explained Ganor, is to seize the institutions of the P.A. and the PLO in the West Bank, “thereby achieving total hegemony on the Palestinian arena.”

Hamas is working constantly towards these goals, while also dealing with the ramifications of the coronavirus in Gaza, coupled with high unemployment rates and domestic criticism over its management of the coastal enclave with 2 million residents.

Under these conditions, Hamas isn’t rushing into a new, head-on military clash with Israel from Gaza, but is patiently working to consolidate its power in the West Bank.

“More than anything else, the fragmentation of the Fatah movement, the lack of leadership by Abbas, as well as his advanced age and medical condition—and the fact that he has not appointed a successor—ensure in the eyes of many the victory of Hamas, even if it does not occur during the expected [elections] date,” said Ganor.

Nevertheless, Hamas is clinging to its claim that the elections must be held and sees Abbas’s decision to delay them as an attempt to delay the end of Fatah’s rule, he added.

In this context, continued Ganor, “Hamas is encouraging and leading the criticism against Abbas, and inflaming the Palestinian street in the West Bank. The Ramadan month and Jerusalem Day taking place next week create excellent opportunities for Hamas to set a fire. Jerusalem and the Al Aqsa Mosque have proven themselves, time after time, as effective triggers for waves of terrorism and violent protests.

“As a result, it seems that in the coming weeks, Hamas in the West Bank will operate on two fronts—deepening the criticism and protests against the P.A., and launching a military-terrorist escalation against Israel,” he added.

A rare direct message from Hamas’s military-wing commander, Muhammed Deif, on Tuesday, warning Israel that further unrest in eastern Jerusalem would cause Hamas to extract a “heavy price” from it, are part of Hamas’s escalation messaging and attempt to outmaneuver Fatah, said Ganor.

US, Egypt don’t seem ‘worried’ by the situation

Ely Karmon, a senior research scholar at the International Institute for Counter-Terrorism, assessed that there are high chances that relations between Hamas and Fatah will deteriorate.

“Hamas was already envisaging an elections victory in light of the division among Fatah ranks,” said Karmon, referring to the appearance of three different and rival Fatah Party lists prior to the cancellation of the elections.

He recalled that Hamas won the 2006 vote to the Palestinian parliament, beating Fatah.

“Towards the end of the Trump era, Turkish President Recep Tayyip Erdoğan brought the two sides to Ankara to media an agreement between them. It was almost signed, but as soon as [Joe] Biden was elected [U.S. president], Abbas did a ‘U-turn’ because he knew there had been a change in the American position, which he viewed in a more positive light,” said Karmon, explaining how a sense of isolation under the Trump administration led Abbas to move closer to Hamas before moving away from it under Biden.

“The U.S. does not at this stage seem worried by the cancellation of the elections. Perhaps U.S. and Israeli intelligence convinced decision-makers that there is a danger of a conquest of the West Bank by Hamas during elections. It seems that the Egyptians are not very upset by the cancellation either, even though they mediate between the two sides,” he stated.

At this time, “Hamas’s capabilities in the West Bank are limited,” he said, particularly due to the security cooperation in place between the P.A. and Israel.

Imprisoned Fatah terrorist Marwan Barghouti, who formed a separate Fatah list, and the Abu Dhabi-based Muhammad Dahlan, a former Fatah member and the ex-head of Fatah’s security forces in Gaza, who also formed a list, are likely disappointed by the cancellation, although it is not clear how they would have fared in the event of a Hamas elections victory.

Karmon said that “canceling the elections was a necessary step for the stability of the P.A.’s rule, especially for Abbas personally. He should have canceled much sooner, but it is easier for him to blame it on Israel’s refusal to allow elections in [eastern] Jerusalem.”