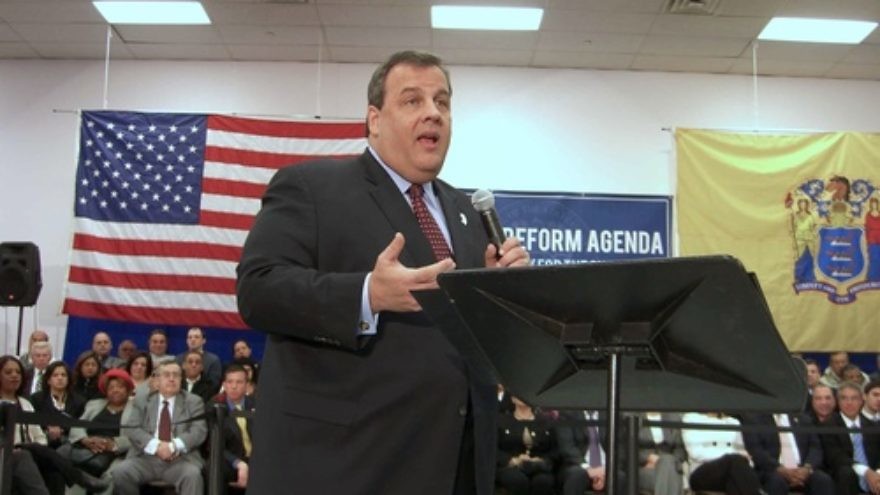 New Jersey Governor Chris Christie, the possible GOP presidential contender who raised the hackles of many a pro-Israel Republican with an off-the-cuff remark in March about the “occupied territories” of the West Bank, got another chance to appeal to high-profile Jewish donors on Sunday.

Many see the earlier flap at the Republican Jewish Coalition’s leadership retreat in Las Vegas as water under the bridge, especially after Christie reportedly apologized to political donor, philanthropist, and casino mogul Sheldon Adelson, who hosted the event, in a closed-door meeting. But others view what they consider a record of supporting New Jersey residents with ties to terrorist organizations as disqualifying the colorful governor from seeking the party’s support.

That’s what made Christie’s May 18 appearance at the annual Champions of Jewish Values International Awards Gala in New York City so important, observers say, even as Rabbi Shmuley Boteach—whose organization, This World: The Values Network, hosted the gathering—called the event decidedly non-political. Boteach, the media-savvy New Jersey rabbi and author who himself mounted an unsuccessful run for Congress in 2012, amassed a panoply of heavy-hitting politicians and financiers for the event, including Republican Governor Rick Perry of Texas, U.S. Sen. Corey Booker (D-N.J.), Israeli Ambassador Ron Dermer, Sheldon and Miriam Adelson, Judy and Michael Steinhardt, anti-genocide campaigner John Prendergast, and actor-activist Sean Penn.

Christie, who did not mention Israel in his remarks on May 18, called for a more aggressive American foreign policy.

“The rest of the world watches in desperation and hope that America will realize and act upon once again its indispensable place in the world,” he said, according to reports. “We must lead.”

Among the most vocal individuals expressing distrust of Christie is Morton Klein, president of the Zionist Organization of America (ZOA). He was in the audience at the Venetian Resort and Hotel when the governor described a “helicopter ride from the occupied territories” to “understand the military risk that Israel faces every day.”

“It’s generally understood that these are at a minimum disputed territories, not occupied, and that Israel has a far greater claim to it politically, legally, historically and religious than the Arabs,” said Klein, who was initially considering boycotting Boteach’s gathering this weekend over Christie’s appearance, before ultimately deciding to attend.

Christie reportedly told Adelson later that weekend that he “misspoke” in his Vegas appearance.

Although he accused Christie of being “rude, insensitive and [showing] a complete disinterest in the issue” when he followed the governor into a hallway behind the stage at the Venetian, Klein attended the New York gala out of deference to Boteach and the Adelsons, whom he described as “close friends.” But he said before the event that wouldn’t be applauding for Christie.

“Everyone I spoke to—and I spoke to maybe a dozen people in the next day or so after this— were all horrified that he would use such a term [and] that his only response was, ‘I misspoke,’” Klein told JNS.org regarding the “occupied territories” remark.

The rift, which has lined up a small cadre of pro-Israel conservative commentators and Republican donors against a Christie presidential candidacy, has created headaches for Boteach.

“I cannot tell you how much troubleshooting I’ve been doing trying to keep people under the same tent when each is objecting to the presence of the other,” said the rabbi, who ran as a Republican in New Jersey’s ninth congressional district on a family values platform. “It is remarkable.”

Boteach called the controversy just one example of how much more Americans now care about what people may think, rather than their actions. He argued that Christie should be judged on his body of work, as opposed to just one comment, adding that he believes the governor to be sufficiently pro-Israel and friendly to the Jewish community.

“Harry Truman did wonders for the Jewish people—he voted for Israel as a state against phenomenal pressure from his own Secretary of State George Marshall. But we discovered a decade ago in analyzing his private diaries that he thought Jews were more cruel than any nation on earth,” continued the rabbi. “Richard Nixon had profanity laced diatribes against Jews in his White House tapes, but he did infinitely more than his Jewish secretary of state in the 1973 Yom Kippur war to save Israel, to resupply Israel, when Israel really was on the brink of annihilation.”

Dr. Daniel Pipes, president of the Middle East Forum, said Christie’s “occupied territories” gaffe follows several cases of the politician backing the wrong horse when it came to Middle Eastern affairs, dating back to when he was the U.S. attorney for the district of New Jersey.

In 2008, Passaic County, NJ, resident Imam Mohammad Qatanani was discovered by the FBI to have been previously arrested and convicted in Israel for aiding and abetting the Muslim Brotherhood and Hamas. Qatanani failed to disclose the three month detention when applying for a green card. But in the lead-up to the cleric’s trial, Christie supported Qatanani, meeting with him at his mosque and calling him “a man of great goodwill,” Pipes and co-author Steven Emerson, executive director of the Investigative Project of Terrorism, charged in a National Review article.

Pipes told JNS.org that if someone associates with a group that is designated by the U.S. government as a terrorist organization, it should be a simple decision for a U.S. attorney not to lend them his support.

Another instance that Christie’s critics raise as evidence of what they call questionable foreign policy views is his 2011 appointment of Sohail Mohammed to a state Superior Court judgeship. Mohammed, who was also an attorney in the Qatanani trial, made his name representing many of the most violent Muslim defendants after 9/11, argued Matt Rooney, an attorney and editor-in-chief of conservative news blog SaveJersey.com.

“They’re objectively terrible human beings, and human being may be too generous for some of them,” said Rooney. “At the same time, some of the people who have been criticizing him, they don’t point to any illegality that he helped them do anything other than to represent them. We are a democracy and really crappy people need to be represented.”

Jacob Toporek, executive director of the New Jersey State Association of Jewish Federations, took a nuanced approach. While the Jewish community looked into Christie’s relationship with the state’s sizable Islamic community, it concluded that the governor is generally supportive of Jewish community concerns, he said.

“It would have been better if he’d not used the [‘occupied territories’] phrase, but I certainly don’t doubt his sincerity and support for the State of Israel,” Toporek told JNS.org.

Rooney characterized that misstep as more indicative of Christie’s foreign policy inexperience, a common problem that has plagued many a politician seeking national office.

“I don’t think they indicate an anti-Israel bias and I don’t think they tell us that he would not come to Israel’s defense,” explained Rooney, adding that Christie is “certainly better than what we have right now in Washington, DC.”

The two-term Christie has not officially announced his candidacy for the 2016 GOP nomination, but is one of a handful of nationally recognized Republican politicians already crisscrossing the country speaking with donors and activists at conventions and battleground states. He had been considered the most electable potential GOP candidate in 2013 until revelations last September that his staff was responsible for lane closures on the George Washington Bridge as retribution against Fort Lee Mayor Mark Sokolich for not supporting Christie’s reelection.

Pipes is adamant that he would not support Christie in a presidential race.

“I’m against him,” said Pipes. “I’m a Republican. I like the general field of Republicans, but I am against Christie, and will do all I can to bring attention to his unsatisfactory record.”

ZOA’s Klein criticized Christie again on Monday after the governor did not mention Israel during his May 18 speech in New York.

“Even a few small words of praise for Israel would have been welcome,” Klein said in a statement, noting that because “this was a Jewish values dinner, Governor Christie could have mentioned that Israel exemplifies Jewish values.”

Klein added, “Similar to his Jewish Values dinner speech yesterday, Governor Christie has habitually remained silent regarding Israel during his other public addresses to Jewish audiences.”