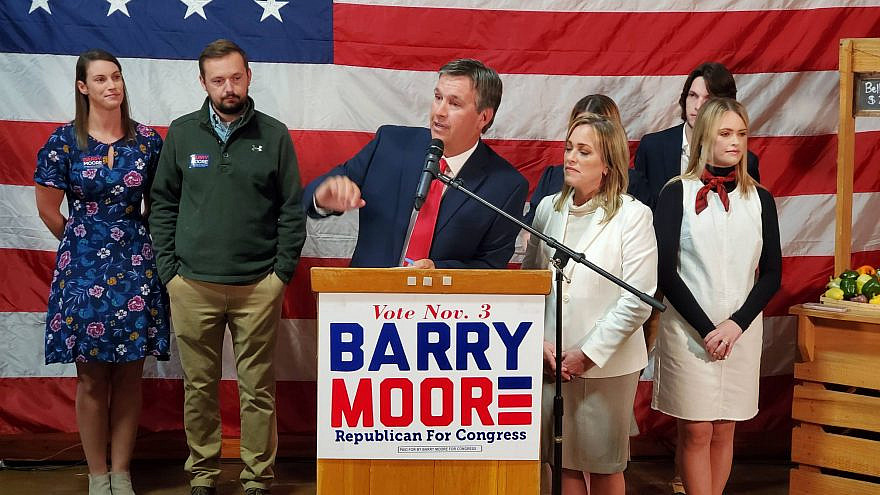 (January 4, 2021 / JNS) Barry Moore, a Republican, was sworn in as a member of the 117th Congress on Jan. 3 after he defeated Democrat Phyllis Harvey-Hall on Nov. 3 in the U.S. House of Representatives election in Alabama’s 2nd Congressional District to succeed retiring Republican Rep. Martha Roby.

Previously, Moore, 54, who is married with three children, served in the Alabama House of Representatives. Before that, he founded a waste-hauling firm.

His support for Israel is driven by his Christian and conservative beliefs.

JNS talked with Moore by phone on Dec. 17. The interview has been edited for brevity and clarity.

A: For a long time, even in the Alabama legislature, I’ve been a strong supporter of Israel, and I’ll continue to be. The Bible is very clear—those who bless Israel will be blessed. That’s one of the things that’s fundamental to my faith.

Q: Do your Christian beliefs fully inspire your support for Israel?

A: I don’t think so. That is fundamental to my faith. We always want to see justice around the world, and any time a race or a party or a people are mistreated, it’s incumbent upon us to do the right thing and help those folks.

Q: What else inspires your support for Israel?

A: Just being a conservative. I think the conservatives I know, they stand with Israel, and they believe that [U.S.] President [Donald] Trump has done a fantastic job of overarching support of Israel. It’s just one of those things as a conservative Republican—most of us support Israel and will continue to fight for its rights and freedoms.

Q: Have you ever been to Israel?

A: I’ve never been. I hope to go soon. I’ve never had the opportunity.

We have family members that have done some work in Israel. My wife’s first cousin has done a great deal of work in Israel over the years and works as a liaison from time to time. He would bring certain dignitaries from Israel, and they would speak at different churches around the country. He’s also lobbied for Israel’s rights in the U.S. Capitol.

Q: Regarding Iran, what’s your reaction to what U.S. President-elect Joe Biden has said about re-entering America into the nuclear deal if Tehran returns to compliance?

A: I think President Trump was smart to get us out of the Iran deal. I don’t think it was good for the country—certainly, not good for Israel and any of Israel’s allies. I hope that Biden will use the leverage that the Trump administration has built and not go back into the poorly formed agreement that they risk Israel’s security.

Q: What about the Iran nuclear deal did you not like?

A: Iran can’t be trusted. Iran poses a severe threat of peace and stability, and if we go back into the deal, we pull the leverage off the table.

A: It’s very troubling to me. It has to do a little with our nation and the moral decline in our country. I’m from the Bible Belt, and we truly believe that Israel is G-d’s chosen people. We’ve lost our way and haven’t taught our kids very well. Just the education system and not educating people on the Holocaust and what happened in World War II and what Hitler did to those people. It’s a combination of poor education and moral decline in our country that has allowed these generations to allow some abuses. Jewish people face a lot of enemies. The left in this country don’t seem to care for the Jewish people. President Trump signed an executive order combating anti-Semitism in December 2019, and I think we need to see that [kind of] leadership.

Q: What’s your stance on the BDS movement?

A: That’s just part of an anti-Semitic movement. It’s a way to try to get people to divest and to punish Israel, and to boycott and to use it as leverage. It’s one of those things I’m totally against. We need to stand against that sort of thing.