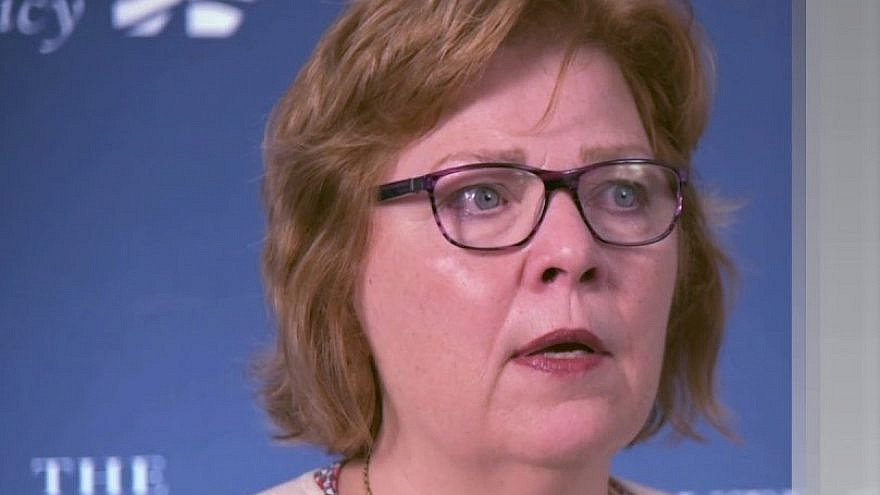 Leaf, speaking at a press conference regarding her recent trip to the Middle East and North Africa, stressed the administration’s commitment to the creation of a Palestinian state side-by-side with Israel “so that Israelis and Palestinians can live safely and securely and enjoy equal measures of freedom, security and prosperity.”

She added that Washington is encouraging security cooperation between the two sides “to the greatest degree possible.”

The administration is focused on bettering economic conditions in the Palestinian-controlled territories, Leaf noted, saying this “can help and sustain improvement in security conditions.”

She listed a number of administration projects designed to boost “economic growth and greater opportunities for Palestinians,” including $100 million promised by Biden during his visit in July to an eastern Jerusalem hospital network, the extension of 4G cellular service to Judea and Samaria and the Gaza Strip, and expanding operational hours and capacity at the Allenby Bridge crossing between Jordan and Israel.

“On the issue of the maritime discussions, they are progressing. Both parties are showing a good, constructive engagement. Our envoy Amos Hochstein and I talk regularly and he is very committed to bringing this to conclusion if the spirit is willing on both sides. And so far, so good. So those differences are narrowing,” she said.

During her tour, which began in Tunisia on August 29, Leaf also visited Jordan and Iraq, with the goal of reinforcing Biden’s “affirmative framework” for U.S. engagement in the region, including a focus on reducing conflicts, enhancing regional security partnerships and promoting regional integration.

In Amman, she met with Jordanian Deputy Prime Minister and Minister of Foreign Affairs Ayman Safadi to discuss “shared efforts to promote regional stability and security.” She said the U.S. will sign a seven-year bilateral Memorandum of Understanding with the kingdom on Friday, describing it as the “longest and largest ever agreed to with Jordan.”

Biden announced the prospective MOU during his meeting with Jordan’s King Abdullah II at the Arab summit in Jeddah, Saudi Arabia, in July. Under it, Washington will provide “no less than $1.45 billion per year in U.S. bilateral foreign assistance to Jordan, beginning in FY 2023 and ending in FY 2029,” according to a White House statement.

Leaf said the assistance will help put Jordan on a more stable economic footing as it pursues economic reforms and copes with an acute water shortage.

On the last stop of her tour in Iraq, in which she visited Baghdad and Erbil, the capital of the autonomous Kurdistan region, Leaf focused on the country’s government crisis, where violence erupted late last month with the Aug. 29 announcement by Shi’ite leader Muqtada al-Sadr that he was resigning from politics.

“In Baghdad, I delivered a straightforward message to a range of senior governmental leaders … that there is an urgent need for Iraq’s political leaders to come together … to make important compromises that will chart a way out of Iraq’s current crisis over government formation,” she said.

“We regard Iraq as a vital partner of the United States on so many levels, a partner with which we want to accomplish much, much more on global issues, including regional issues, including water security, climate change, and increasing trade and investment opportunities,” Leaf continued.

“The grinding impasse over government formation which flared into violence 10 days ago, unfortunately, only underlined the degree to which such opportunities are being squandered.”

Referring to Iraq’s Federal Supreme Court ruling last February that an oil and gas law in Kurdistan is unconstitutional and demanding that the region hand over its crude supplies, Leaf warned that attempting to enforce the decision risks widening the political crisis into an economic one. She suggested Baghdad and Erbil resolve the matter through third-party negotiations.