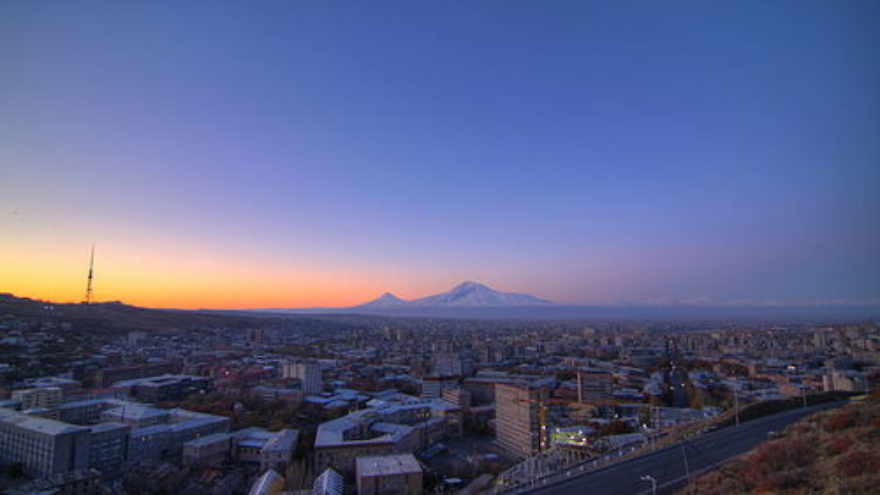 The conflict in Syria has forced millions to leave their homes, among them many of the country’s Armenian minority. Many have fled and returned to Armenia, a safe haven for ethnic Armenians—much as Israel is for Jews around the world. So it is ironic, given this shared need for a homeland free of religious intolerance, that Armenia’s own Jewish community has been pressured and intimidated since the country attained independence.

Anti-Semitism in Armenia is an unfortunate and little-acknowledged fact. Since the fall of the Soviet Union, the country’s Jewish minority and Jewish heritage—the products of a more tolerant time—have shrunk dramatically. The end of Soviet rule removed constraint, and anti-Semitic attacks rose dramatically. That, and Armenia’s ongoing economic collapse, drive the Jews of Armenia to flee the country. In just 20 years, Armenian Jewish population has shrunk from more than 5,000 to just a few hundred.

And the cultural violence has continued. Anti-Semitic books are published and TV programs aired, and the Holocaust memorial in the capital of Yerevan has been repeatedly defaced. Of course, many countries have suffered such unfortunate incidents, the product of an ignorant populace. But in Armenia such views have been espoused even by mainstream politicians and media personalities. In 2004, a pro-government radio presenter expressed anti-Semitic views for months on end. A nationalist politician was also allowed to freely make lurid slurs against Jews before public pressure forced the government to arrest him.

The dwindling Jewish community in Armenia has complained about these attacks—the head of the Jewish community expressed her concern that “this [anti-Semitism] has the backing of people in power.” But appeals have fallen on deaf ears, which is hardly a surprise when such attitudes are shared by much of Armenian society. The Anti-Defamation League’s latest survey in June 2014 showed that the rate of anti-Semitism in Armenia (at 58 percent) was the third-highest in all of Europe, and the highest in all of the former Soviet Union and Eastern Europe. Thus, around 1.3 million out of 2.2 million adults in Armenia expressed anti-Semitic attitudes. Armenia’s closest comparisons were with virulently hostile countries in the Middle East.

Sixty-three percent of Armenians surveyed believe that Jews are hated “because of the way Jews behave;” 60 percent claimed that “Jews don’t care what happens to anyone but their own kind;” 45 percent think that “Jews still talk too much about what happened to them in the Holocaust;” and 38 percent consider that “Jews are responsible for most of the world’s wars.”

Also disturbing, and of concern to Jews around the world, is that in 1988 some 49,928 families (250,000 Azerbaijanis) were forced to flee their places of origin in 172 Azerbaijani inhabited villages, 89 villages with mixed ethnic population, and six cities from Armenia. During the deportation, 226 Azerbaijanis were killed by Armenians and scores horrifically injured. Their houses and properties were burned as well.

The Khojaly massacre, committed by current Armenian leadership with incredible brutality, was one of the worst tragedies of 20th century. It is a historical fact that the Armenian armed forces and gunmen spared none of the Khojaly residents, who had not managed to leave the city and its surroundings. As a result of the atrocities of the Armenian armed forces, 613 people were killed, 487 people were crippled, and 1,275 people—the elderly, children, and women who were captured—were subjected to unprecedented torture, abuse, and humiliation.

In addition, Armenia, the aggressor, illegally occupied 20 percent of Azerbaijan, including Nagorno-Karabakh and seven adjacent districts. This caused a refugee crisis numbering nearly 1 million innocent Azerbaijanis, as they attempted to ethnically cleanse the region. Today, this remains a threat to peace and security in the South Caucasus region. Encouraged by intense Armenian lobbying efforts in the U.S. and other key nations, as well as by strong and ongoing Russian military, economic, and political aid, Armenia has ignored four United Nations Security Council resolutions associated with the occupation of Azerbaijani lands and treatment of civilians.

Perhaps this is not so surprising considering that one of Armenia’s closest allies is theocratic Iran, which has always opposed Israel’s right to existence. This strange relationship has been very beneficial for Iran, which has used Armenia as a conduit for smuggling and other illicit activities, often with serious consequences for U.S. national security.

The last point also has unnerving overtones for Armenia’s Jewish community, which has never forgotten the participation of the brutal 20,000-strong Armenian Legion as part of Wehrmacht in the Second World War. The Legion, led by the nationalist warlord known as General Dro, was tasked with rounding up Jews and other “undesirables” behind the German army as it swept across Russia, and organized their death marches to the concentration camps.

In such an environment, it is hardly surprising that most of Armenia’s Jewish population has either fled or intermarried to avoid attracting attention. Regrettably, the government of Armenia does almost nothing to curb the growing anti-Semitism in the country. Until Armenia realizes that narrow-minded nationalism and blaming the country’s economic and political problems on outsiders will never solve anything, the Jews of Armenia will continue to suffer.

Arye Gut is a board member of the Israeli-Azerbaijani International Organization, official coordinator of the “Justice for Khojaly!” international campaign in Israel, and an expert in international relations.