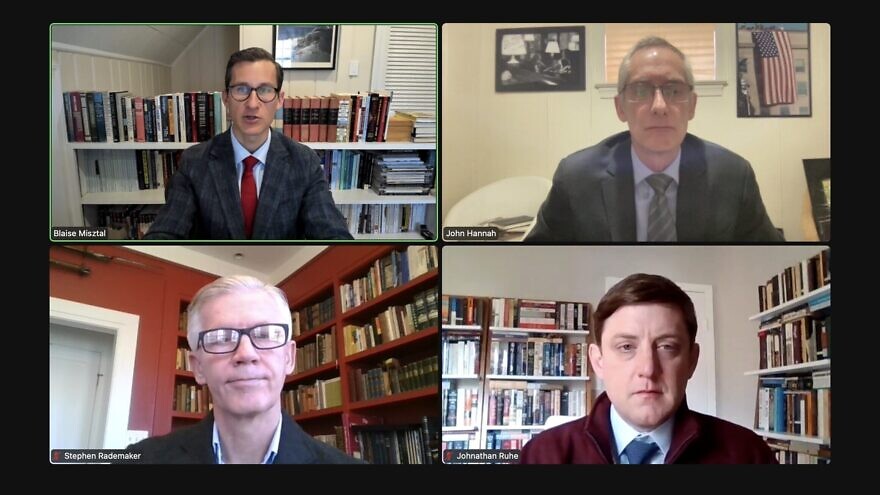 (February 11, 2022 / JNS) As Biden administration officials have recently signaled that they were approaching a conclusion to negotiations Joint Comprehensive Plan of Action (JCPOA) on Iran’s nuclear program through indirect negotiations in Vienna, lawmakers have started to voice their opinion about the deal, most recently with Senate Foreign Relations chairman Bob Menendez (D-N.J.) and a few other Democratic colleagues urging the administration not to accept a weaker deal.

On Thursday, the Jewish Institute for National Security of America (JINSA) hosted a virtual panel of experts to analyze where the negotiations may be and what to expect from members of Congress in the coming weeks.

Ruhe asked Rademaker to describe Menendez’s concerns over the deal, which he wrote about in a recent op-ed in Al-Monitor.

Rademaker said that by all indications, it appears that the indirect talks between the United States and Iran in Vienna are approaching a conclusion, though it’s not known whether that signifies a breakthrough agreement or the collapse of dialogue.

This proximity to the conclusion is likely what motivated Menendez to speak on the Senate floor criticizing the administration’s negotiation tactics. Nearly a year after becoming president, there is no indication that the deal is approaching the second step of the Biden administration’s negotiation goal of achieving a longer and stronger deal to re-enter the 2015 Joint Comprehensive Plan of Action (JCPOA). 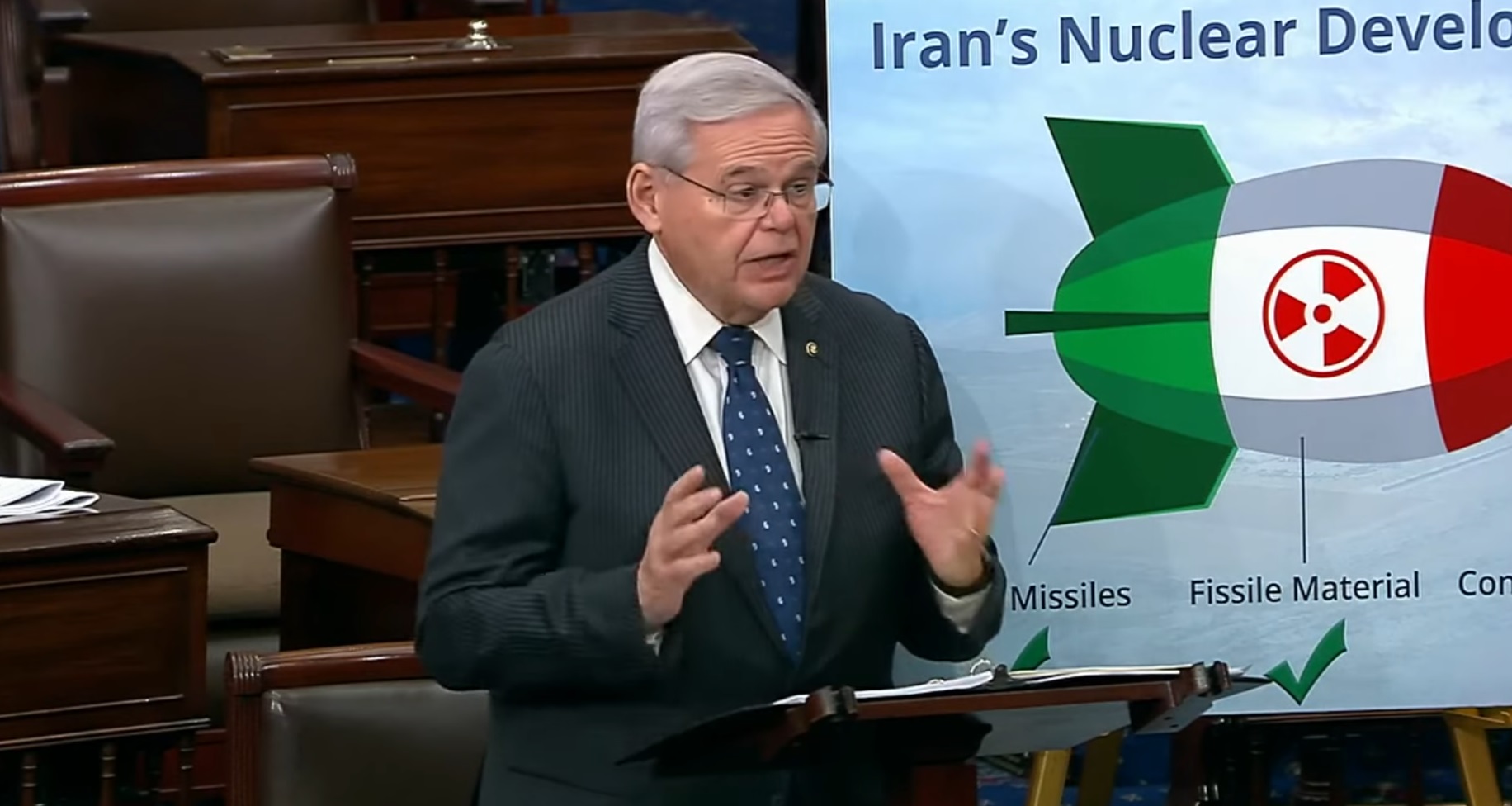 JCPOA special envoy Rob Malley held a classified briefing with the Senate Foreign Relations Committee on Tuesday. While Rademaker was not sure what the conversation actually was having only heard secondhand sources, it’s likely that Malley was told Congress expected the administration to follow the Iran Nuclear Agreement Review Act (INARA) of 2015, a law that requires both chambers of Congress to approve the agreement.

In 2015, all Republicans in the Senate and House of Representatives voted against the JCPOA as well as 10% of Democrats, including Menendez, Sen. Ben Cardin (D-Md.) and Majority Leader Chuck Schumer (D-N.Y.).

Rademaker noted that after leaving the briefing, Republicans and opponents of the deal said they were troubled that the administration wants to re-enter the JCPOA, which would not address the real problems Iran poses, while Democrats who supported rejoining said what they heard during the briefing confirmed the urgency of their stance.

Ruhe asked Hannah how—after more than 10 months of negotiation—the options seem to be worse for the United States than when the negotiations began.

Hannah explained that Iran sees opportunity caused by American fatigue dealing with military withdrawal and other issues in the region. Seeing the Middle East drop in priority for the United States, Iran and China have sought hegemony over the region and have worked to undermine American interests.

“I think the real strategic view here is that Iran saw an opportunity, saw a weakened United States that lacked attention and focus, that lacked any ability anymore to couple diplomacy with anything except economic sanctions and inability to couple diplomacy with military power as an instrument of coercion,” he said. “And the Iranians said, ‘We’re going to use this negotiation as a cover to go for broke on our nuclear program, to build leverage and to get the absolute very best deal we can while undermining America’s position in the Middle East.’ ”

Hannah said those working on the issue 15 years ago thought Iran would get hit hard if they ever crossed red lines like reaching 20% uranium enrichment. Now Iran is nearing 90% enrichment, which is considered weapons-grade.

He added that there is no evidence that any of the administration’s threats, including saying that Iran has only weeks left to negotiate for the past few months, are credible. 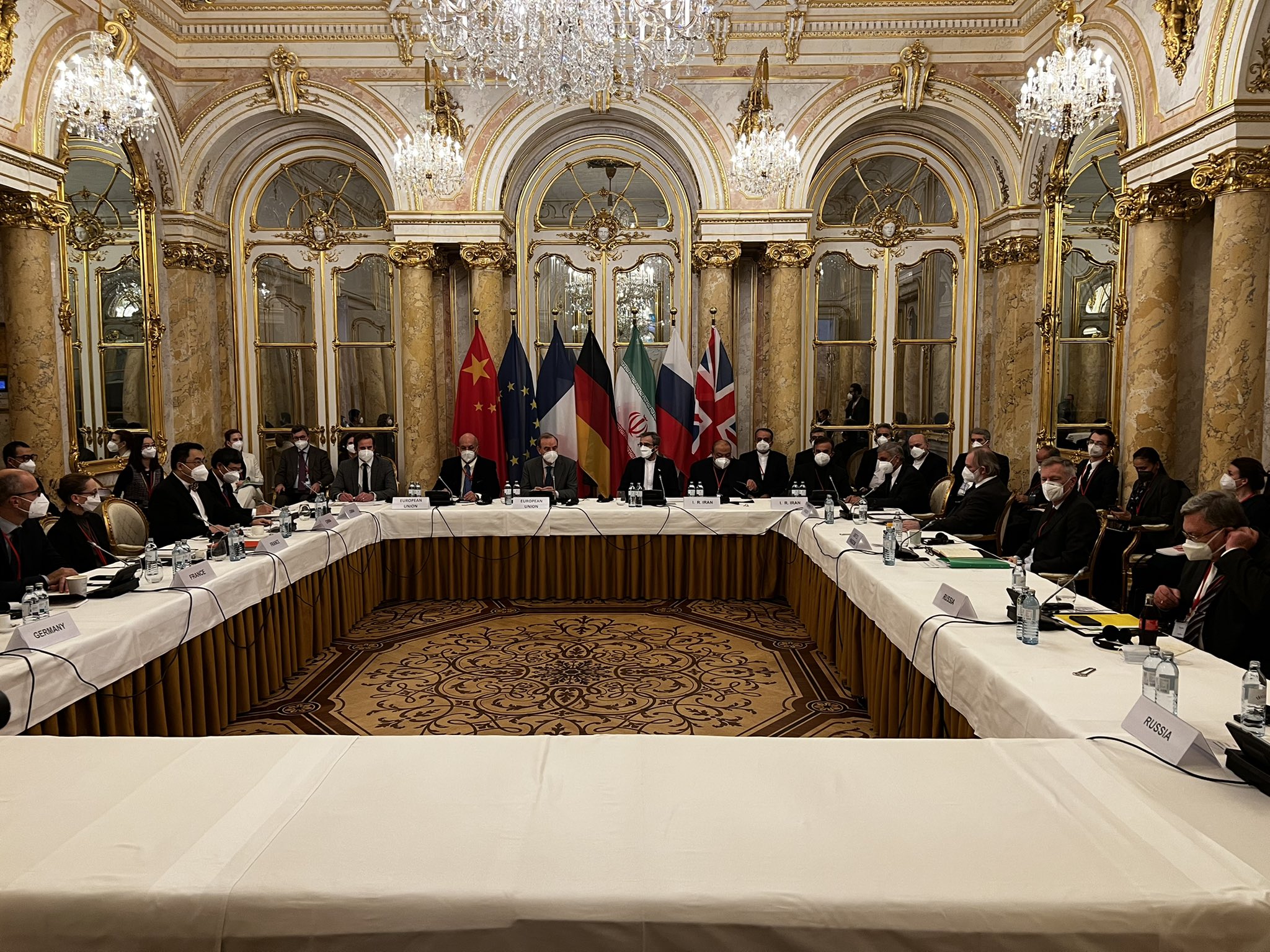 “It’s a decision, at what point does Iran say, ‘You know, we’ve gotten everything we can out of this. This is an excellent deal for us. We are now anywhere between two to nine years away from having an industrial-scale nuclear program that’s legitimated by the entire world. We’ll be the screwdriver’s turn away from a nuclear weapon with the blessing of the international community. So let’s collect our chips, cash them in and go for this very short-term deal now,’ ” stated Hannah. “But it’s all in their hands.”

Misztal spoke about the difference between breakout time and nuclear threshold. Breakout time is the amount of time need to produce enough fissile material—either highly enriched uranium or plutonium—to produce a single nuclear device. When people talk about the Islamic Republic being a threshold state, they mean that it is within a certain amount of time where the world’s ability to determine if Iran is going to break out is longer than the time it actually needs to.

During the original bill’s negotiations, the threshold time was considered to be two months, but Iran is now well beyond it.

Misztal said that Malley apparently told the Foreign Relations Committee that the breakout time is about eight weeks. Other estimates put that time to one month. Iran, he said, has stockpiles of 20% and 60% enriched uranium, as well as advanced centrifuges capable of even further enrichment.

Now, he said, the conversation both in the United States and Israel has turned to not whether Iran could produce enough fissile material for a nuclear weapon, but to how long would it take for Tehran to put it in a device that triggers a self-sustaining chain reaction, causing a nuclear explosion.

“According to some estimates, Iran doesn’t know how to build a weapon yet. They’re still one, two, three years away from building a nuclear device. So even if they have the fissile material, maybe we don’t need to worry yet because we still have some time before they can build a weapon,” said Misztal. “And so those red lines of what we’re allowing and comfortable allowing Iran get away with seem to keep getting pushed back further and further. Meanwhile, Iran has advanced well beyond where we were willing to let them be just a couple of years ago.”

‘A shorter and a weaker deal by definition’

Hannah said that since Israel got a nuclear archive out of Iran in 2018, according to prominent nuclear-weapons physicist David Albright, the Iranians were on the brink of a “very workable weapon design” that it could have almost on demand.

Ruhe asked if given the closeness Iran is to a nuclear weapon whether that makes it imperative to re-enter the JCPOA.

Misztal said the calculation is not just about what the breakout time is if Iran is not in the deal, but also if it is part of one.

Because Iran has produced and learned how to operate advanced centrifuges, even American negotiators acknowledge that it can’t get Iran’s breakout time back to 12 months or more, according to Misztal. If a deal was signed today, those centrifuges would have to go into storage but do not have to be destroyed, with Iran being able to bring them back in a short amount of time, he added.

“The administration came in … talking a very big game about getting to a longer and stronger deal—a recognition that the JCPOA negotiated in 2015 was inadequate and needed to be lengthened and strengthened,” said Hannah. “Because of how far the Iranians have advanced and how much time has passed, the Biden administration is going to get a shorter and a weaker deal by definition, and I think they acknowledge that now.”

Rademaker said that under INARA, a two-thirds vote in Congress would be required to block the nuclear agreement, but there have not been indications from the administration whether it will comply with the law with any deal it negotiates now.

“I think a good faith reading of that law would require them to submit virtually any agreement that they might negotiate to Congress because it would fall within the definition of a nuclear agreement with Iran,” said Rademaker. “That said, … the Biden administration would desperately like to avoid having to submit an agreement to Congress, especially now that Senator Menendez has been pretty clear that he’s opposed to any agreement.”

Just like in 2015, it is expected an agreement with Iran would be unanimously rejected by Republicans in both chambers, as well as some Democrats. While it’s unlikely that two-thirds will reject the agreement, it’s likely to be rejected by a majority vote.

Rademaker said the more the agreement departs from the original JCPOA, the harder it would be for the administration to make the case that they don’t need to submit the agreement for congressional review.