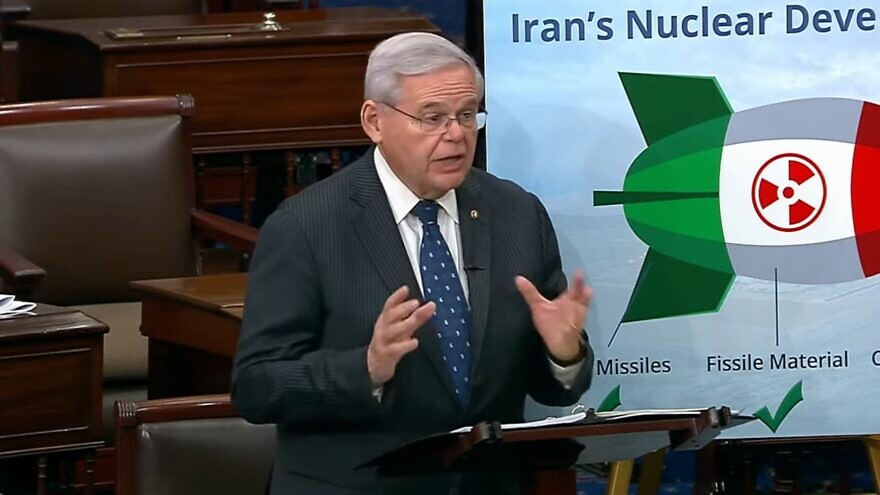 “As someone who has followed Iran’s nuclear ambition for the better part of three decades, I am here today to raise concerns about the current round of negotiations over the Joint Comprehensive Plan of Action, and Iran’s dangerously and rapidly escalating nuclear program that has put it on the brink of having enough material for a nuclear weapon,” said Menendez in a speech on Monday on the Senate floor.

The senator, who heads the powerful Senate Foreign Relations Committee and would have considerable influence over any U.S. agreement to re-enter the nuclear deal, said “three to four weeks. A month or less. That’s how long most analysts have concluded it would take Iran to produce enough fissile material for a nuclear bomb, if they choose to do so. That is not a timeline we can accept.”

“That is why I’m calling on the Biden administration and our international partners to exert more pressure on Iran to counter its nuclear program, its missile program and its dangerous behavior around the Middle East, including attacks on American personnel and assets,” said Menendez.

The United States has been involved in talks since June on re-entering the nuclear deal with Iran that the Trump administration exited in May 2018. Several rounds of talks have been taking place in Vienna with Iran and other world powers, including the United Kingdom, France, Germany, Russia and China.

In his hour-long speech, Menendez cast doubt on Iran’s intentions, saying “even when it seemed a constructive agreement might be possible last summer, upon taking office, the [Iranian President Ebrahim] Raisi government abandoned all previous understandings and, as I mentioned, made absolutely clear that Iran’s ballistic missiles and regional proxy networks are ‘not negotiable.’ ”

“At this point, we seriously have to ask what exactly are we trying to salvage?” he asked bluntly.

The senator went on to say that while he believes in diplomacy and multilateral talks, “we cannot ignore Iran’s nefarious support for terrorism or accept threats to American interests and lives. We must welcome legitimate and verifiably peaceful uses of nuclear power, but remain true to our nonproliferation principles and our unyielding desire to build a more stable, safer, prosperous world for the American people and all peace-loving people to thrive. In order to do so, Iran cannot and must not possess a nuclear weapon.”