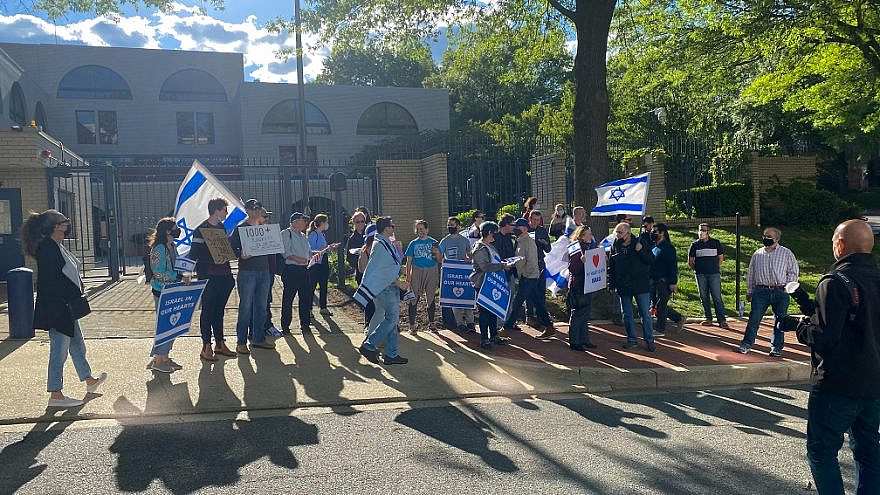 (May 14, 2021 / JNS) American supporters of Israel rallied in front of the Israeli Embassy in Washington, D.C., on Wednesday, expressing their solidarity with the Jewish state that they feel is being misrepresented by the international community and media.

About 40 people attended the rally, which was spontaneously organized via social-media groups. Many in attendance were expatriate Israelis hearing firsthand from family members in Israel about the situation. They stood in front of the embassy gates and on the street corner, waving U.S. and Israeli flags, and holding signs in support of Israel.

“I came because I feel for my people. Because we hurt. Because we need to do something. We cannot just stay at home and look at the horrible news, cry about it and do nothing,” said Sigal Sidi, who is originally from Tel Aviv but now lives in Potomac, Md.

“We want to show the world that we care,” she said, “that the news that they get is not always the truth, and we support Israel 100 percent on her ability and her right to protect our citizens. That’s why we are here.”

Sidi said that she was also disappointed by the Biden administration’s response to the violence, despite having voted for him in the 2020 election.

“I’ve been attacked from many members of my family and here in the U.S. that I’m not patriot[ic] enough for my country if I voted for Biden,” she said. “And yes, I feel disappointed because he needs to be brave. A leader needs to be brave. A leader needs to look at the truth and say what the truth is. And it’s OK to be political and to say both sides need to calm down, but you cannot say ‘Israel, please stop the missiles.’ ”

Sidi said that she hopes for coexistence with Israel’s Palestinian neighbors, including those in the same cities, but that if the bombing continues, it is the right of Israel to defend itself. 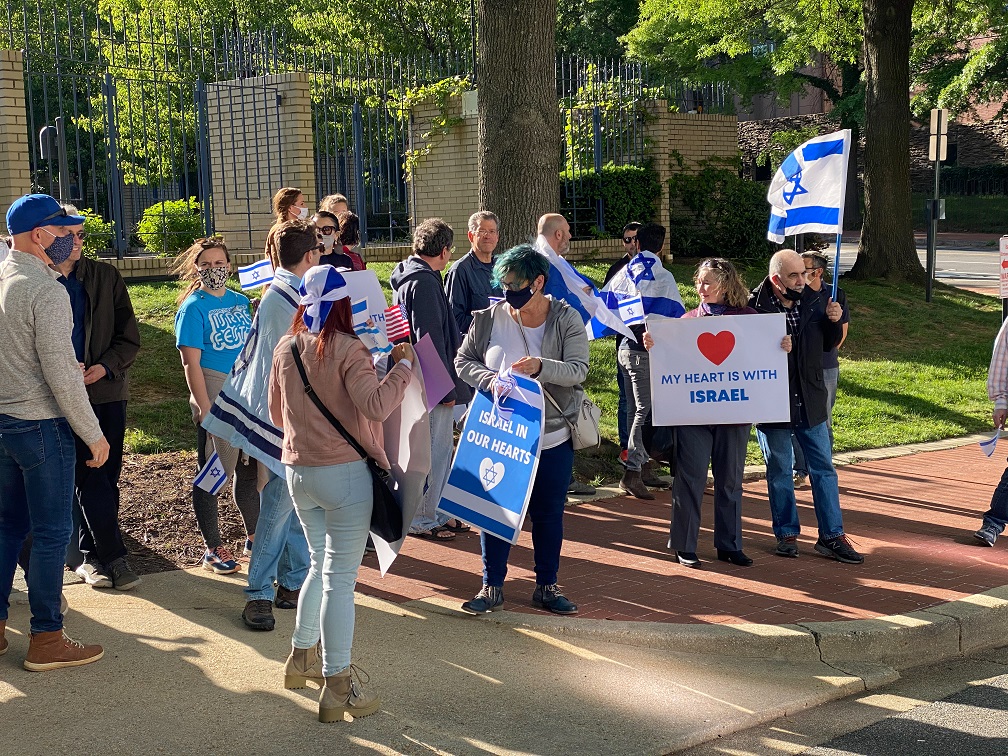 “We want to show the world that we care,” said Sigal Sidi from Potomac, Md. Photo by Dmitriy Shapiro.

‘It’s the little we can do to show our support’

Elkana Bar Eitan, who lives in Rockville, Md., brought his family to the rally, which did not have the rumored counter-protesters show up.

“We have family and friends in Israel that are in the bomb shelters as we speak, and we feel that being so far away, it’s the little we can do to show support,” he said.

Bar Eitan was one of the people who helped spread the word throughout the community about the rally.

“I think it’s tragic that a modern democracy is being attacked by terrorists who are shooting hundreds of missiles on innocent civilians. And the way the international press and most people outside of Israel view it as if it’s kind of a mutual thing where both sides are doing something wrong—for us, we’re here to show that it has nothing to do with Israeli policy or anything. It’s simply Israel being under attack, and we’re here to show our support and care,” he said.

Bar Eitan said that in his view, Israel’s response to the attacks from terror groups in the Gaza Strip could be stronger: “Israel cares too much sometimes about the other side. I respect that, but at times you think that to maybe be a little bit stronger prevents this from happening again.”

The attendees at the rally gathered at various points to sing Israeli songs, but some, like Barry Ritman of Silver Spring, Md., who came there with his wife, Helen, said that he hoped there could have been more people in attendance and an audience.

Holding the rally near the embassy meant that it was a few blocks from the highly trafficked D.C. thoroughfares, surrounded only by other embassies.

“It’s shameful that there’s nobody watching,” he said. “We’re all singing to each other. We’re not singing at others.”

The Ritmans were supporters of former President Donald Trump and see the current administration as a continuation of what they believe to be inept Middle East policy held over from the Obama administration.

“They have no understanding that just a few months ago, Israel was on track to make peace with all these Arab countries,” said Helen Ritman. “Don’t they get a clue that there’s something that happened in our government that has changed very quickly, and all these people are part of the Obama administration. They’re just handovers to Biden.”

Moti Kachlon, an Israeli American who was born and raised in Ashkelon, and has been living in the United States for the past 17 years, said that he had to come out to support his country, where most of his family still lives.

“It’s beautiful to see all of us coming from everywhere supporting Israel, our beloved country,” he said.

The American response to the conflict didn’t bother him.

Asked about possible evictions of Palestinians in eastern Jerusalem that are being blamed for sparking the violence, Kachlon had a simple answer.

Ron Hagag, another Israeli who lives in Falls Church, Va., said that Israel never looks for violence, but especially in the Middle East, its desire for peace is misinterpreted as weakness.

“We’ve been sending out weakness messages, and they’ve been wrongly interpreted by our enemies. I think now we’re in a place where we have to react, and we don’t like it because we like to avoid war and avoid violence,” he said. “So that’s why I’m here. To demonstrate that we are strong; we’re not apologizing.”

Hagag believes that Israel has a mature response to the situation and that even though there are some Israelis involved in some of the violence, they are widely condemned in Israeli society, unlike on the other side of the conflict.

“I think you can say that there is a silent Arab minority that is against violence, but I think they are too silent right now,” he added.

For Hagag, the current administration’s positions on the Israeli-Palestinian conflict have little substance and demonstrate a lack of knowledge about the Middle East.

Lily, 19, who asked not to use her last name, was one of the younger rally attendees. Now on her gap year, she works as a Capitol Hill intern. She said it was important to note that she worked for a Democratic office because support for Israel, in her view, is too often politicized.

“Israel is also the United States’ closest ally,” she said, “and while a lot of people are very upset about the amount of resources that the United States spends to protect Israel, it’s the only reliable ally in the Middle East.”