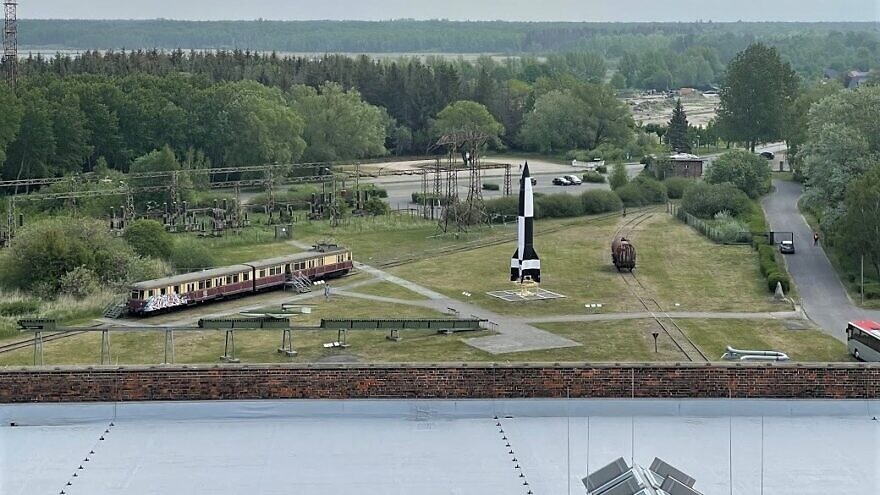 (May 26, 2022 / JNS) Boris Romantschenko lived through four Nazi death camps. His death in Kharkiv, Ukraine, this March—a result of a Russian strike on his apartment—made international headlines.

Romantschenko, 96, survived the Buchenwald, Dora and Bergen-Belsen concentration camps. Lesser known was his time in Peenemünde, where he was forced to help the Nazis build the V-2 rocket at a secret weapons development site on the island of Usedom along the Baltic Sea. When the serial production of rockets as terror weapons against the Western European civilian population started in Peenemünde, Romantschenko belonged to the first group of 600 to 700 prisoners who were to manufacture the weapons as work slaves in the large hall of the Peenemünde serial plant while housed in a temporary camp on the basement floor of the building.

Last weekend, the New York Philharmonic took to the stage to perform at Peenemünde, where the power plant’s turbine hall had been converted to a concert hall some 20 years ago.

For Yulia Ziskel, a member of the Philharmonic’s first violin section, the thoughts of war, of anti-Semitic oppression—of performing in the same space where her Jewish brothers and sisters were once forced to be cogs in the Nazi death machine—never strayed far away. Ziskel herself is a Jewish refugee, having fled from Russia as a teenager with her family.

“It got me thinking a lot. When I visited on a pre-tour in October, it kind of stirred a lot of emotions, and I felt the strange energy of this place as soon as we passed the gate. Now, in these times, it probably stirs double because I’m here thinking, ‘Could history repeat itself?’ ” Ziskel told JNS. “So, it’s a very scary time in that respect for me. Being Jewish, being of Russian descent, living in the U.S. for almost 30 years, it’s kind of mind-boggling. At the same time, I wake up every morning and my mom calls me and she says ‘Aren’t we lucky to be in the States now?’ ”

‘Partly written on the train’

Organizers of the Usedom Music Festival had tried for a decade to book the New York Philharmonic as headliners before their three-day residency last weekend. The festival is held each year at Peenemünde, with the concept being that such an ugly, evil piece of history can be turned into a place of peace and hope. The hall accommodates a crowd of up to 1,200, who walk their way past old, rusted gears, up cold metal steps and past the remnants of the power plant’s control station to get to their seats.

One can easily mistake the intention of the event, as enthusiastic classical-music lovers smile throughout the performance, applauding thunderously at times. The festival is not meant to paper over Nazi atrocities with the sounds of music. There is no detwinning the two, and that’s exactly the point.

Anne-Sophie Mutter is one of the world’s most well-known violinists and was a featured soloist at Usedom on Saturday. She performed “The Concerto for Violin and Orchestra Anne-Sophie,” named for and presented to her as a love letter of sorts by her future husband, Jewish German-born composer André Previn. Mutter’s first teacher was a Jew who had to hide her faith in the Nazi era. Previn, meanwhile, fled the Holocaust with his family, finding refuge in the United States. 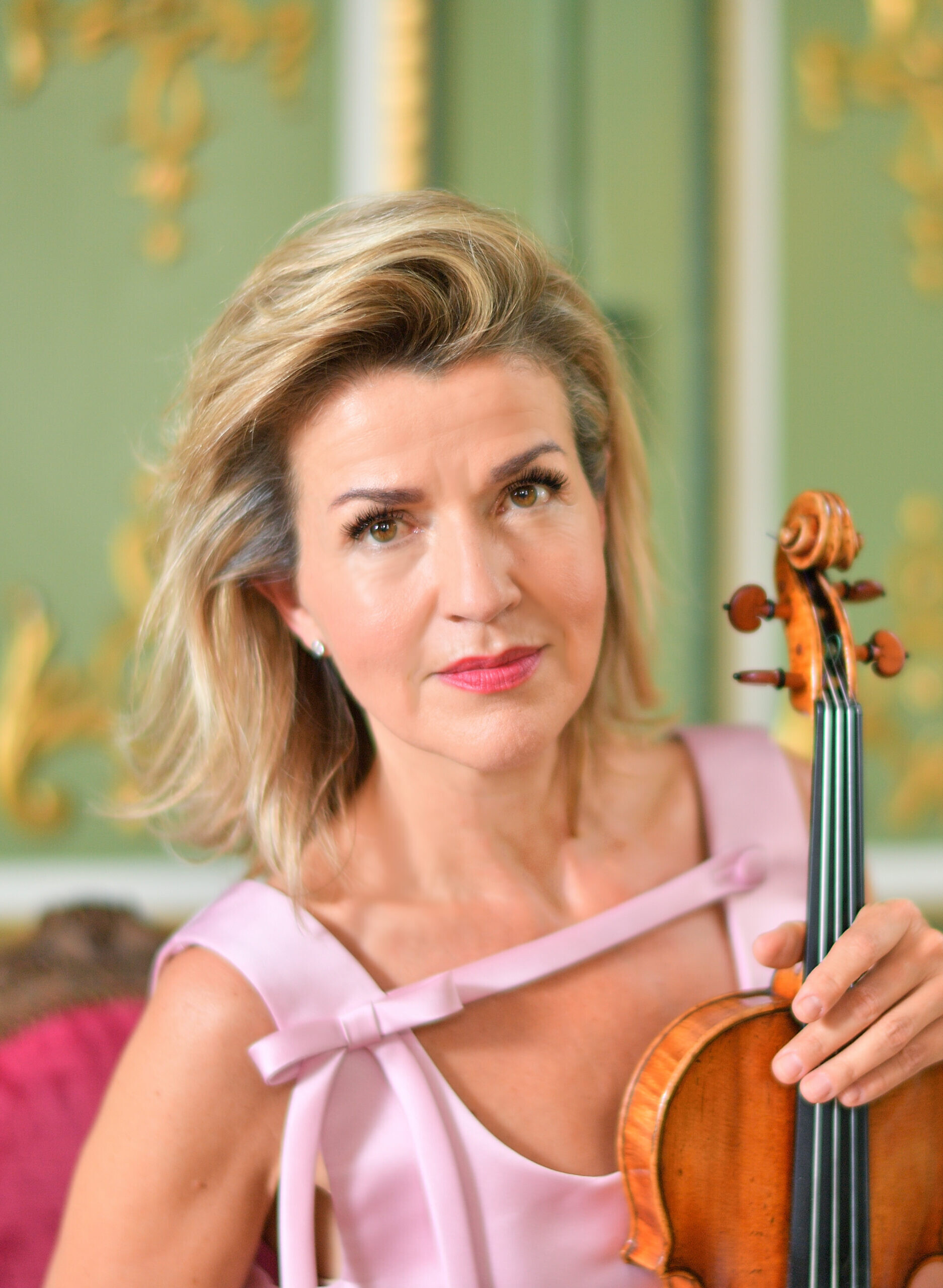 In an interview with German national TV (partly in response to a question submitted by JNS), Mutter revealed intimate details of that gift from the late Previn, who passed in 2019.

“It is in three movements—quite classical form. Yes, partly written on the train when he was on his way back to Berlin. This was his hometown from which he was expelled at the age of 9. Interestingly, he was warned by an SS officer who came in the evening to warn his father—a successful Jewish lawyer in Berlin—that it was now becoming dangerous. That very night, the family fled to Paris with only a suitcase, then to the States.

“André grew up in Los Angeles and gained a foothold in film music,” continued Mutter. “The Violin Concerto, written after 2000, was an engagement gift. It is linked to André’s childhood and to Germany because in the last movement, it has as its theme one of his favorite children’s songs, “Wenn ich ein Vöglein wär.” When he showed me the score, I was insanely moved because it is also my favorite children’s song. And he prefaced this concerto movement with a quote from T.S. Eliot, which also refers to his return to his homeland, to Germany, to Berlin.”

The Eliot quote she refers to is: “We shall not cease from exploration. And the end of all our exploring will be to arrive where we started and know the place for the first time.” 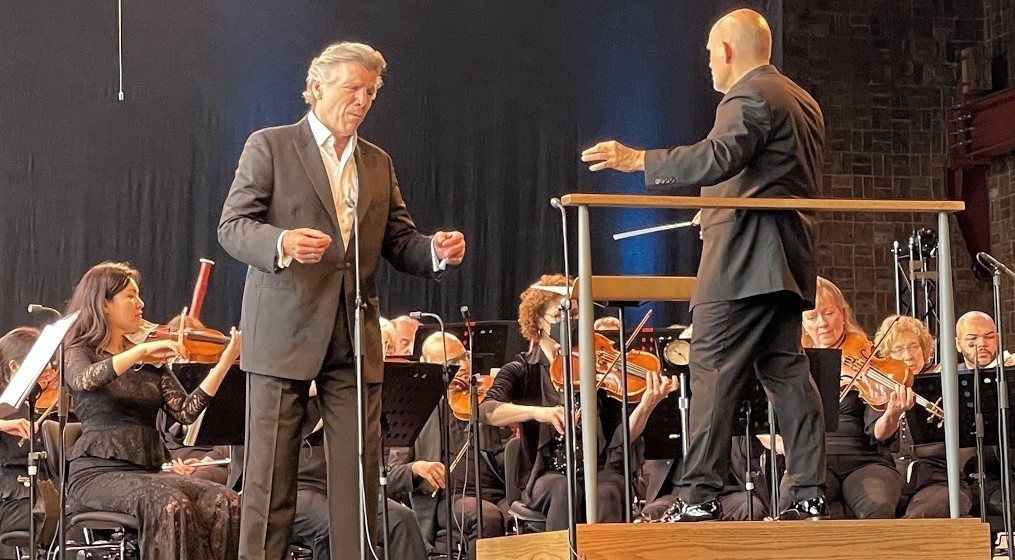 ‘It really is kind of incredible’

Thomas Hampson, regarded as today’s preeminent American baritone, was spotlighted in the Philharmonic’s performance on Sunday. He sang selections from Austro-Bohemian Jewish composer Gustav Mahler, who Hampson has long studied.

Mahler, who converted to Catholicism in order to steer his career around bans on Jewish conductors, and who later married a woman who by published accounts hated Jews, once famously said he was “thrice homeless, as a native of Bohemia among Austrians, as an Austrian among Germans, and as a Jew throughout the world.” Long after his premature death, his works, described derisively by a member of the German press as “speak[ing] German with a Yiddish accent,” were banned by the Nazis.

“Singing Mahler’s music, you’re never very far from many personal thoughts and reflections and disappointments in human nature. I think that is what Mahler is often inviting us to contemplate when you hear his songs. Yes, you can talk about him being an outsider, feeling disenfranchised, but all of his songs … he’s not a political person. He’s a personal person, and he’s always demanding of ourselves to question why we do what we do. And I think that’s very beautiful and powerful,” Hampson told JNS prior to his performance at Usedom.

Walking through the halls of Peenemünde with a war in Europe raging, that question posed by Mahler is not easily answered. Romantschenko served as a vice president of the Buchenwald-Dora International Committee for Holocaust survivors for years, working “intensively on the memory of Nazi crimes,” according to the foundation. Upon his death, the committee shared a photo of Romantschenko from 2015, when he read the Oath of Buchenwald in Russian and said: “Building a new world of peace and freedom is our ideal.”

It may be the ideal, but some things still remain the same. The dichotomy of hope and hopelessness were expressed last weekend in the music and the atmosphere at Peenemünde.

“You have to ask, do people change? And as an artist, it’s probably the most important question I can ask. Because I’m not sure we can change very much if someone is not always asking that. This is what Mahler is always asking. And yes, if you sing Revelge or Der Tamboursg’sell, there’s a victim involved. But what is the victim of? Of aggression, of oppression, of abject torture at times. Mostly, a victim of fate. Someone else decided that person’s life is not worth something. This is the heartbeat of most of his music,” said Hampson.

Even that tortured heartbeat brought Sunday’s audience to its feet in the end, providing the Philharmonic with thunderous applause in the same building where the Nazis once plotted how to destroy New York City.

“I was in the audience for the concert here in October,” said Ziskel. “And I was also on tour during the day and saw how the energy of this place changed when the music starts. It is really kind of incredible.”

The Historical-Technical Museum Peenemünde, which features exhibits documenting the Nazi weapons-development program and its aftermath, will commemorate in its upcoming new permanent exhibition in memory of Romantschenko. The Usedom Music Festival dedicated the residency of the New York Philharmonic to Romantshenko and is calling for donations for UNICEF Children’s Aid in Ukraine.