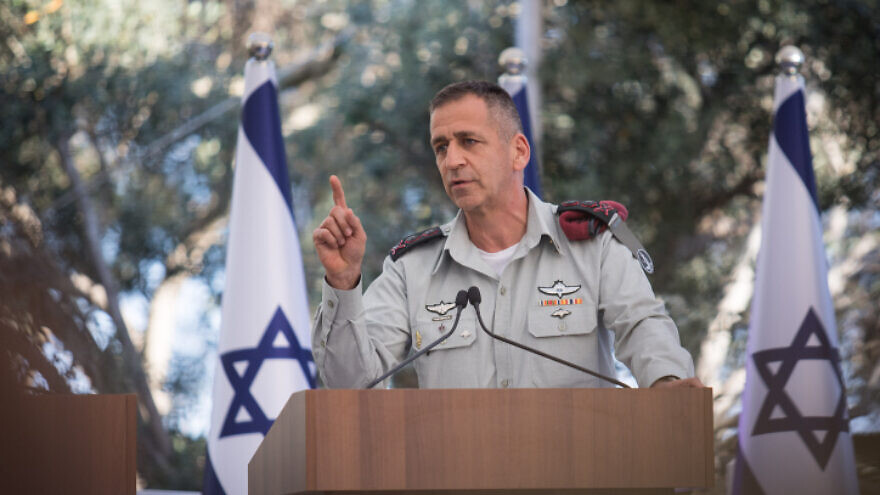 In the introduction of a message to all IDF personnel ahead of Holocaust Remembrance Day, which begins on Monday evening, Kochavi wrote:

“When the soldiers of the Jewish Brigade went into the concentration camps with the Allies, the survivors couldn’t believe their eyes—soldiers were wearing the Star of David. They saw a Jewish soldier as a contradiction in terms … something that could not be. The survivors were the lone branches that remained of a rich, diverse tree that was almost chopped down. Many communities were wiped out, neighborhoods were burned and entire families were exterminated—from grandparents to the youngest grandchildren. We bow our heads to them.

“We remember those who were burned to death and murdered in cold blood. We remember and cannot comprehend how a child was ripped from the arms of her mother, how exhausted fathers were forced into hard labor and then shot to death for failing to keep up. We remember those who stood up to the Nazi scourge, weaponless, and had the strength to oppose them. … They all shared the hope that one day, a generation would arise out of the blood and ashes that would have the privilege of living in its own nation—the State of Israel. That is what came to pass.”

The Star of David, Kochavi wrote, is no longer a badge of shame, but the symbol of the IDF, expressing the power to defend, time after time, the people and the nation.

“The current reality [of the pandemic] does not allow us to meet with the survivors, to support them and be inspired by them. At this time, our mission is to protect them. We will always remember them—the lives they built anew, the communities they founded, the traditions they kept alive,” he wrote.

Following in their footsteps, said Kochavi, Israel would never again depend on the kindness of others. Memory, said the IDF chief, is a source of strength.

“We will follow in their path and remain vigilant, so that we need never depend on someone else’s kindness. We will continue to tell their stories and ensure that their testimonies continue to echo forever, and we will keep in our hearts those who fell victim to the Nazi evil. Memory is a source of strength, of spirit and of values,” he wrote.