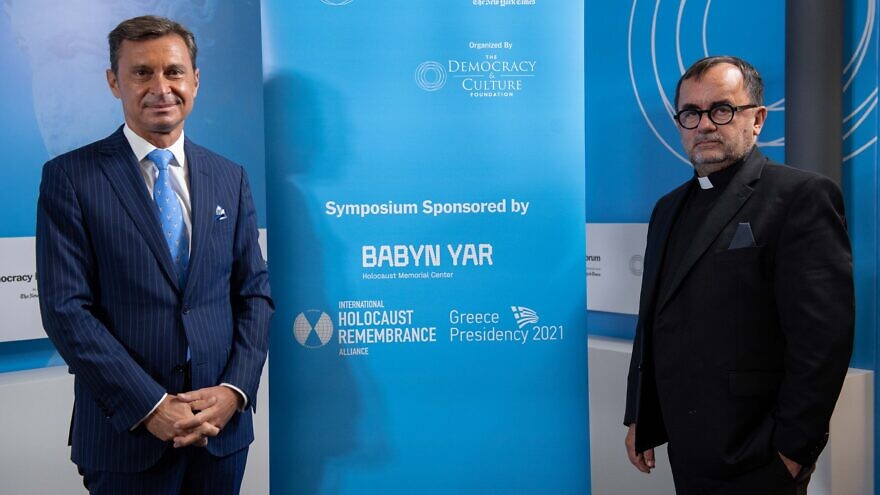 (September 30, 2021 / JNS) A discussion was held on Thursday at the Athens Democracy Forum marking exactly 80 years since the Nazi massacre of Ukrainian Jews at Babi Yar on the outskirts of the Ukrainian capital of Kyiv (Kiev). In a period of 48 hours, the Nazis shot to death almost all of the city’s Jewry in the ravine known as Babi Yar.

The discussion was initiated by the Babyn Yar Holocaust Memorial Center, together with the International Holocaust Remembrance Alliance (IHRA), against the background of a concerning rise in anti-Semitism around the world and addressed ways to combat this dangerous phenomenon. In addition, the participants spoke of the importance of Holocaust remembrance and commemoration in the face of the ongoing trends of historical distortion and Holocaust denial.

Chaired by Daniel Holtgen, director of communications for the Council of Europe, the panel was opened by Greece’s Foreign Minister Nikos Dendias, who stressed the importance of standing firm in the face of Holocaust denial, saying “with all our might, we must stand against hatred, and we will continue to promote Holocaust education.”

Dendias explained that “neo-Nazi groups are trying to re-emerge in our countries, and although it is a marginal group in Greece, their popularity has increased with the economic crisis. We see them as criminals who deny the Holocaust and promote neo-Nazi ideas; they have no place at all in Greek society. Their efforts will fail. We will be able to overcome them and not let these ideas rise again.”

Noting the importance of the event taking place on the anniversary of the Babi Yar massacre, he concluded: “We are here to fight resolutely for the memory of the victims and the future of our children and future generations.”

Addressing the conference via video from Jerusalem was Ukrainian-born Israeli human-rights activist Natan Sharansky, chairman of the Babyn Yar Holocaust Memorial Center. Sharansky spoke about the importance of commemoration not only to honor the victims but to ensure that the lessons of history are learned in the modern era.

Also speaking was Father Patrick Desbois, head of the Babyn Yar Holocaust Memorial Center Academic Council. He lamented that “what has always surprised me is that Hitler never missed workers to kill. Beginning in 1941 with the German occupation of the Soviet territories, the Germans began mass shooting of people everywhere they went. The Germans carried out most of the killings, but they had no difficulty finding partners to help them. Such partners were everywhere: in Ukraine, Poland, Romania, Belarus.”

Speaking about the rise of anti-Semitism, Desbois noted that it’s returning with a vengeance. “It is not only hate speech; now, unfortunately, in France, we hear someone was attacked or a synagogue is attacked. When the first Jew was killed for being Jewish 12 years ago, we were all in the streets; now, no one is in the streets. We have to teach about the Holocaust to show the gravity of anti-Semitism, to show the connection between hatred and hate crimes.”

Ambassador Chris J. Lazaris, chair of the International Holocaust Remembrance Alliance, and Irina Bokova, former director-general of UNESCO and chair of the board of governors of the Democracy & Culture Foundation of the Athens Democracy Forum, also addressed the audience.

Lazaris noted that “we must be careful to make the narrative of the Holocaust accessible to the younger generation, outside the formal education of the classroom, but online.”

Speaking of the difficulties of educating about the Holocaust, Bokova said “it is important not just to show the big figures, the huge numbers, but to show the human stories, the faces, the families, the children. Supporting this type of approach like is being done in Babi Yar will immensely raise awareness and pass a different message to Ukrainian society, and to further understand and remember this terrible crime.” 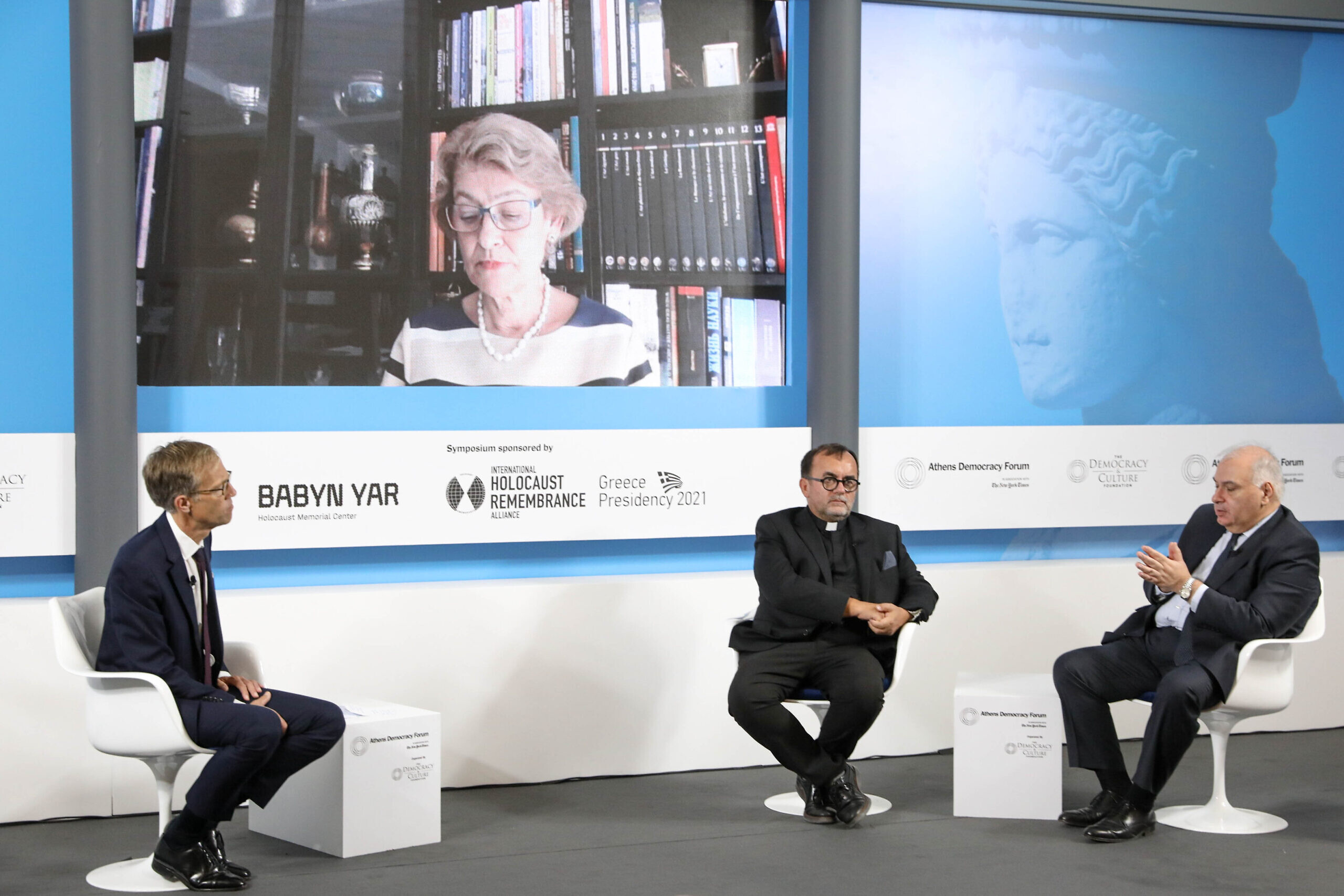 From left: Daniel Holtgen, director of communications for the Council of Europe; Father Patrick Desbois, head of the Babyn Yar Holocaust Memorial Center Academic Council; and Ambassador Chris J. Lazaris, chair of the International Holocaust Remembrance Alliance (on screen is Irina Bokova, former director-general of UNESCO and chair of the board of governors of the Democracy & Culture Foundation of the Athens Democracy Forum), Sept. 30, 2021. Credit: Courtesy of the Athens Democracy Forum.
Republish this article in your newspaper or website