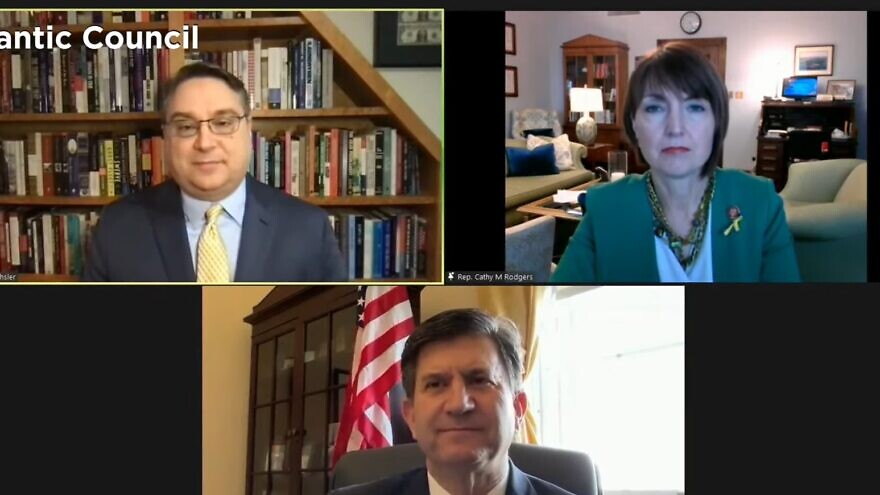 (March 11, 2022 / JNS) The White House says it’s investing in the success and expansion of the Abraham Accords. Congress wants to give them a nudge.

On Tuesday, the co-chairs of the U.S. House of Representatives’ Abraham Accords Caucus held their first public event, detailing the bipartisan nature of the effort to advance the normalization agreements signed between Israel and a number of Arab and Muslim-majority nations, and laying out an agenda for moving forward.

“The Abraham Accords, without question, are ushering in a new era. We’ve already a shift in the vision for Middle East nations, a shift in thinking as to what are the possibilities for peace, a shift in actions seen at the people-to-people level, seen in travel, in energy projects, everywhere,” said Rep. Brad Schneider (D-Ill.).

“This is a way for Congress to reaffirm and continue to support what was launched. For Democrats and Republicans, in both the House and Senate, it was a momentous achievement. And it’s important to build on it, so our caucus is looking for new economic, political and cultural opportunities. The caucus came about by members saying that we need to do whatever we can to promote these agreements, including traveling to these countries, to identify priorities in building alliances,” said McMorris Rodgers.

“There are so many issues that divide Congress along party lines, and between the House and Senate. But I was on the White House lawn the day the Abraham Accords were signed, and everyone was celebrating this truly historic step. The U.S. did and continues to play a crucial role, so this caucus was the natural next step. Let’s make a positive difference together,” added Schneider, a member of the House Foreign Affairs Committee.

The Abraham Accords were promoted and signed under the administration of then-President Donald Trump. The administration of current U.S. President Joe Biden seemed hesitant at first to pick up the mantle, deprioritizing the Middle East in favor of concerns with China and Russia.

Republicans are especially pressuring the White House and U.S. State Department to do more.

“Our goal is to work with the State Department to gain clarity as to how they will support the Abraham Accords. We need to understand where the admin is coming from, and I’ve already reached out to start having those conversations,” said McMorris Rodgers.

“No matter who is in the White House, we want to be supportive—whether it’s travel, working with the State Department, building relationships with the signatories—we’ll have meetings with ambassadors to discuss the greatest opportunities. We want to make sure this is just the beginning of these relationships. We’re looking for regional partnerships, public-private partnerships, whatever it is—in agriculture, tourism, health care, energy—anything that will cause others to want to be a part of this,” she said.

The Abraham Accords caucuses are looking forward to the passage of the Israel Relations Normalizations Act, which is currently included in the congressional omnibus spending bill likely headed to Biden’s desk for a signature. The bill requires the State Department, among other things, to develop a strategy for expanding and strengthening the Abraham Accords and encouraging further normalization of relations with Israel.

“The work being done in caucus is foundational to the success of any legislation, and as this caucus meets more in person, has more briefings, identifies priorities across the aisle and across the Capitol, we will be more successful. I’ve had good meetings with colleagues on this, particularly in the Energy and Commerce Committee,” said McMorris Rodgers of the committee, where she is the ranking member.

Schneider has played a leading role in the push to pass the Israel Relations Normalization Act, which gathered a politically balanced 330 co-sponsors in the House (218 votes is needed for passage of a bill) and more than 65 co-sponsors in the Senate. Schneider blamed the bill’s stall on the hard-left House members known as “The Squad” and on Republican Sen. Ted Cruz, who took issue with language in the bill calling for a two-state solution.

“My hope is that the Palestinians see the potential for the benefits that have come to other countries as a result of the Abraham Accords. I heard a speaker say recently that he hopes the Palestinian leadership eventually sees regional normalization as a bridge to a better future, rather than a bypass road leaving them behind,” said Schneider. “It’s not now or never, but now is an amazing opportunity.”