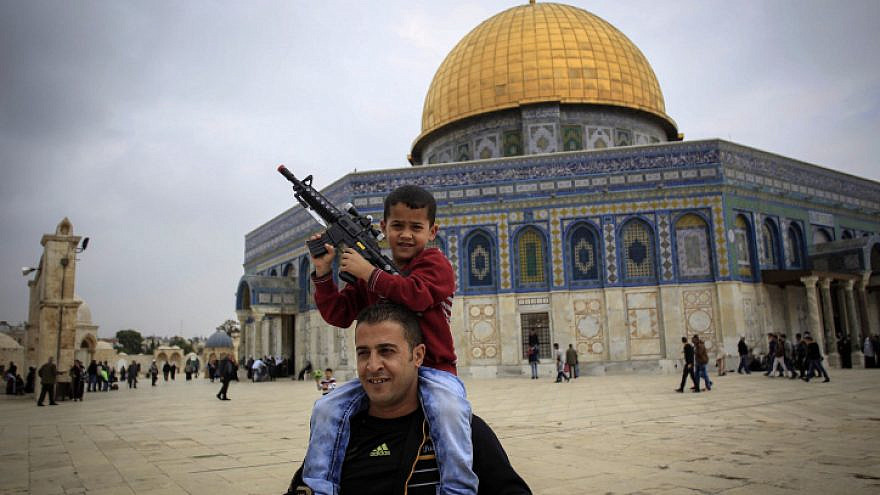 A Palestinian child plays with a toy gun on his father's shoulders at the Al-Aqsa mosque compound in Jerusalem's Old City on Nov. 6, 2015. Photo by Muammar Awad/Flash90.
Spread the word.
Help JNS grow!
Share now:

Palestinian Child Soldier Week is a global movement to end the use of Palestinian children as soldiers. It will be observed this year from Feb. 14-19.

The purpose of the week is to raise awareness of a problem the coalition charges has been treated as a “minor issue” by organizations such as UNICEF, Human Rights Watch and Amnesty International—possibly for “political reasons.”

“For decades, [this] systemic issue has been ignored or brushed off as unrelated individual incidents,” said the coalition in a statement. “Without pressure or consequences for using this practice, systemic Palestinian child militancy has flourished.”

The coalition noted that for decades, minors have been used in various military capacities by Palestinian militant groups, including the PLO, Hamas, the Popular Front for the Liberation of Palestine and Palestinian Islamic Jihad. Children have been used by these organizations as soldiers, suicide bombers, terrorists, tunnel diggers, mules for explosive devices and human shields, particularly in mass organized riots. They have also been used by these groups as couriers, spies and lookouts.

“The phenomenon of institutionalized racist, anti-Semitic, militarized education, child-training camps, and mass propaganda encouraging wanton violence from stabbing to rock-throwing are part of the systemic child militancy developed by [these] organizations,” stated the coalition, noting the physical, mental and developmental harm of these activities on the children.

The coalition called upon UNICEF to demand that Palestinian militant organizations adhere to the 2007 Paris Principles, an international agreement supported by UNICEF that rejects any use of minors (17 years of age or younger) in military conflicts, whether by state or non-state actors.

The coalition noted that every year, nearly 10,000 Palestinian children are trained in “terrorist ‘summer camps.’ ”

Between the years 2015 and 2016 alone, more than 30 Palestinian children were enlisted to commit stabbing attacks in what became known as the “knife intifada” in Israel. Those attacks have continued with the latest occurring Jan. 25 by Atallah Mohammad Rayan, 17, who attempted to kill a female Israel Defense Forces soldier at a junction near Ariel. Rayan was killed in the attack.

The previous month, Mahmoud Omar Kameel, 17, a Palestinian teenager from Jenin, was killed on Dec. 21 after he twice tried to shoot Israeli border police in Jerusalem’s Old City.