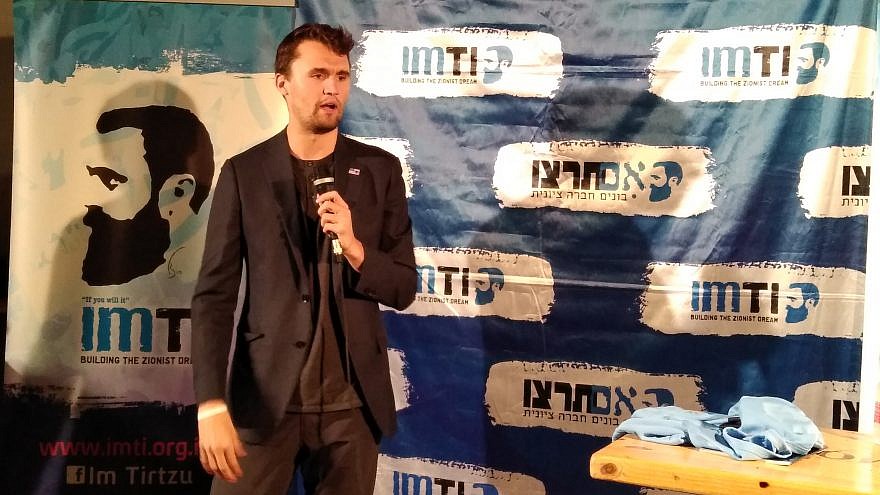 (March 20, 2019 / JNS) “The Western media has become so good at lying about this country,” says Charlie Kirk, founder of the Conservative “Turning Point USA” organization, referring to Israel as he addressed a standing-room only crowd in a Jerusalem pub on Monday night. His talk, organized and sponsored by the Im Tirtzu Zionist movement, drew a wide audience that included Israelis and immigrants, students from abroad, along with several Christian Arabs in attendance.

Kirk, in Israel visiting for his second time (his first trip was in May 2018 when he attended the ceremony for the opening of the U.S. embassy in Jerusalem), told JNS that he had returned to Israel “to learn, network, meet new friends and to be able to grow the movement for freedom, in the most important country in the world outside of the United States.”

It was during a fact-finding mission this week—visiting places like the Golan Heights, Hebron and the Israel-Gaza border—that Kirk saw firsthand how “programmed by the Western media” he had become to certain negative beliefs about the Jewish state.

Kirk, who told the room that “I’m very pro-Israel, I’m an evangelical Christian, I’m a conservative, I’m a Trump supporter, I’m a Republican, and my whole life I have defended Israel,” says he was given a real eye-opener visiting the biblical town of Hebron. He says he thought that he would see Arab “refugees living in tents,” and instead was “shocked” to find a city “with malls, shopping centers, which is 97 percent Arab,” where it was the Jews whose access to most of the city he found to be restricted.

While visiting the Golan, he was equally amazed to learn how Israeli hospitals treated Syrians wounded in that country’s civil war, despite the fact that Syria is an enemy country. And down near the Gaza border, he was more than surprised hearing how Israel evacuated nearly 10,000 Jewish residents from Gaza back in 2005 for “peace,” but was rewarded with rockets and cross-border terrorism.

Only 24, Kirk has millions of followers on his social-media platforms and has utilized his Turning Point USA organization to work to fulfill its mission, according to its website, of building “the most organized, active and powerful conservative grassroots activist network on college campuses,” across America. Kirk warned that “college campuses are one of the biggest threats to the entire world” for their brand of radicalized leftist ideologies.

Simply, his goal is to combat what he calls an “ideology of destruction.” He believes that unfortunately, both Israel and the United States are in the same boat when it comes to supporters of that ideology as he says the extreme left “hate[s] Israel and America. They hate the idea that certain countries can be better than others, and Israel is one of the greatest success stories in history of the world. The left doesn’t want those success stories to exist.” 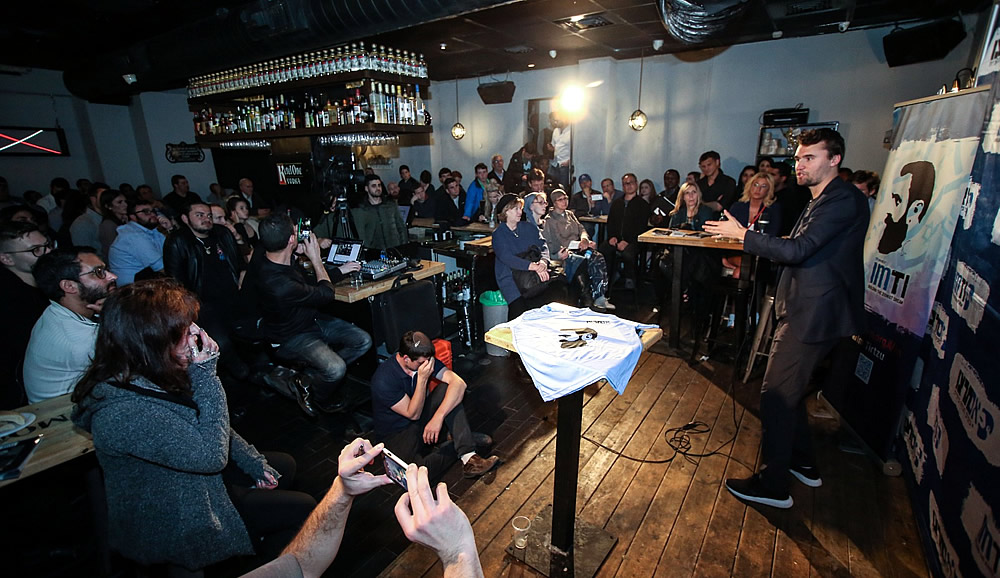 Kirk is adamant that a major difference exists between those who identify with “liberal values” and those who are on the “left.” He explains that a liberal is someone he might disagree with on social and other issues, but at the end of the day, a liberal “will agree to disagree,” but do so respectfully. For example, Kirk says that while he doesn’t always agree with longtime Harvard University Law professor and attorney Alan Dershowitz, he has major respect for his pro-Israel work, calling him a “true liberal.”

A “leftist,” he says, will try to silence a person before they speak. Kirk says those types, as a result of their intolerance, constantly interrupt him and have even tried to get him banned from speaking on campus.

While in Hebron, Kirk says he witnessed the Breaking the Silence (BTS) Organization’s tactics of trying to provoke Israel Defense Forces’ soldiers, noting their self-restraint as members of BTS he says got in the faces of the troops. He thinks Israel needs to be careful about groups like BTS, who create a moral equivalency, with media backing, between the moral conduct of the IDF and terrorists from Hamas. “What I saw in the Breaking the Silence folks, I saw the anger and I saw the intensity. It reminds me of the American left,” he said.

In regard to sentiments on Jews and Israel in the U.S. halls of power, Kirk says that he is repelled that “there is real institutional anti-Semitism rising in the Democratic Party—not just rising, but it seems to be revealed.” He believes that the trend is not a media exaggeration but the current reality, citing recent anti-Semitic comments made by Minnesota Rep. Ilhan Omar.

But he is most shocked, he says, by what he sees on campus—most notably, from some Jewish students he has viewed as “militantly anti-Israel.”

Kirk is referring to those who participate in Israel Apartheid Week and other BDS activity on campus. When confronted about other regions of conflict in the world, they tell him they have no intention of standing up against atrocities being carried out in places like Iran or North Korea, but are only interested in combating Israel. And that’s what Kirk is getting at: Programs dedicated to standing up against “a country the size of New Jersey” represent anti-Semitism, plain and simple.

When asked by an audience member what would be his definition of success looking back 20 years from now, Kirk, who says that he is guided by the founding American principles of E pluribus unum (“out of many, one”), “In G-d we trust” and “liberty for all,” answers: “In 20 years, I would love to have the same global impact for freedom and national sovereignty that George Soros [the well-known left-wing Jewish philanthropist] had for leftism and Marxism.”

Im Tirtzu CEO Matan Peleg told JNS that he appreciated the chance to host Kirk’s talk, saying “Im Tirtzu and Turning Point USA are fighting on different fronts in the same war of ideas against the radical left.”

He added that he hoped the audience gained “a better understanding of the mutual threats shared by Israel and the U.S., and how we are working to combat them.”