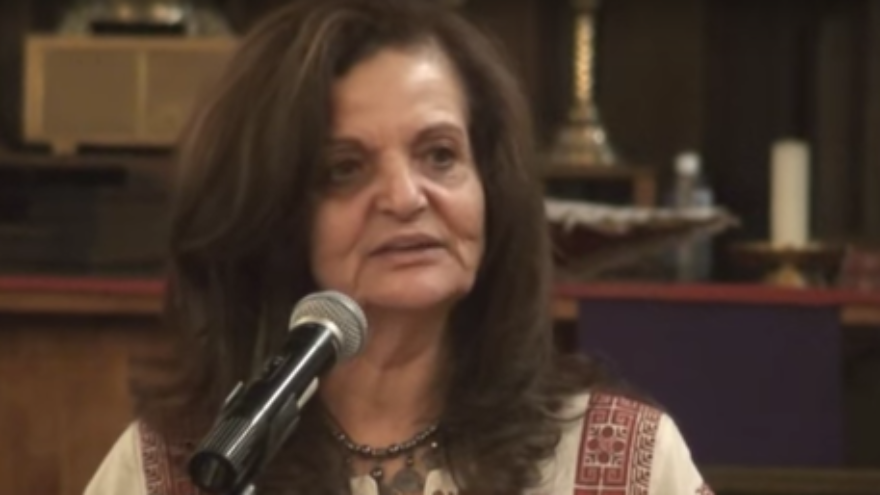 A Palestinian terrorist who murdered two Hebrew University of Jerusalem students has found a new ally, the far-left Jewish Voice for Peace (JVP) group. How mainstream Jewish liberal groups respond will be telling.

The killer, Rasmea Odeh, is locked in a battle, initiated by the Obama administration, to deport her for lying about her terrorist past. It all began in February 1969, when the 20-year-old Odeh, together with a fellow member of the Popular Front for the Liberation of Palestine (PFLP), set off a bomb in a Jerusalem supermarket. Two Hebrew University students who were shopping in the store, Edward Jaffe and Leon Kanner, were killed.

Odeh and her accomplice were soon arrested. It didn’t take long for the authorities to build an airtight case. Bomb-making materials, including explosives, had been found in Odeh’s home. She confessed to the bombing within a day of her arrest, provided details of the operation and even made a videotaped reconstruction of how she planted the bombs. Her co-conspirators also confessed, and they all implicated each other. (Later, in a documentary film, one of her comrades named Odeh as the mastermind of the attack.)

Not surprisingly, Odeh was convicted of the two murders. She was also convicted of membership in a terrorist organization, the PFLP. Odeh was sentenced to life imprisonment, but in 1980 she was released in a prisoner exchange. In 1995, she moved to the U.S., and in 2004 received American citizenship.

In 2013, federal immigration officials became aware of Odeh’s background and took a second look at the forms she filled out when applying for citizenship. The form asked if she had ever been convicted of a crime; she wrote, “No.” The Obama administration indicted her on charges of immigration fraud.

Odeh was convicted and ordered deported to Jordan. But an appeals court ruled last year that her lawyers were wrongly denied permission to argue that Odeh lied on the forms because she suffered “post-traumatic stress disorder” while imprisoned in Israel. A new trial is set to begin May 16.

Since she has so little chance of prevailing in court on the merits, Odeh has been desperately trying to create political pressure that she hopes will influence the legal process.

As it turned out, though, Odeh’s Arab-American allies have proven rather ineffective. The Arab-American Action Network (AAAN), for which Odeh works, has formed its defense of her around two arguments. One is that Odeh “misunderstood” the question on the form; that’s obviously absurd.

The AAAN’s second line of defense is that Odeh confessed to the bombings only after several weeks of “torture” and “sexual abuse” by Israeli interrogators. That, of course, conflicts with the fact that Odeh confessed after just one day in jail. And the AAAN has no way to explain the bombs found in Odeh’s apartment, the statements of her co-conspirators or her undisputed involvement with a terrorist group.

So Odeh has been looking for other allies. And she’s found one—on the edges of the Jewish community. The far-left JVP has announced that Odeh will be one of the featured speakers at its national conference, in Chicago, at the end of March.

JVP was founded by three undergraduates at the University of California, Berkeley. It’s ironic that an organization founded by college students should be embracing someone who murdered two college students. I suppose as long as she didn’t murder any members of JVP, they don’t consider her to be the enemy.

JVP is pretty much as far to the left as you can get in the American Jewish world. The Anti-Defamation League has called it “the most influential anti-Zionist group in the United States.” JVP is well-known for supporting the anti-Israel Boycott, Divestment and Sanctions campaign and wholeheartedly endorsing the Black Lives Matter platform, which charges Israel with “genocide” and “apartheid.” In other words, the “Jewish” in JVP’s title is essentially a cover for anti-Israel activities.

The problem is when left-wing Jewish groups that are not as radical as JVP start to treat JVP as legitimate, instead of as a pariah. Note, for example, that JVP’s director spoke at J Street’s 2011 national conference. After Odeh speaks at the JVP gathering in March, she will surely look for other audiences in the Jewish community. She needs them to soften her image and create pressure against her deportation.

Mainstream Jewish liberal groups need to understand that Odeh represents a red line. Anyone who gives a platform to this convicted murderer will be crossing that line. If groups like Americans for Peace Now, Ameinu (Labor Zionists) and others in their camp want to maintain their credibility and be taken seriously in the Jewish community, they need to make it unequivocally clear, right now, that they reject JVP’s hosting of Odeh and will never have anything to do with her.