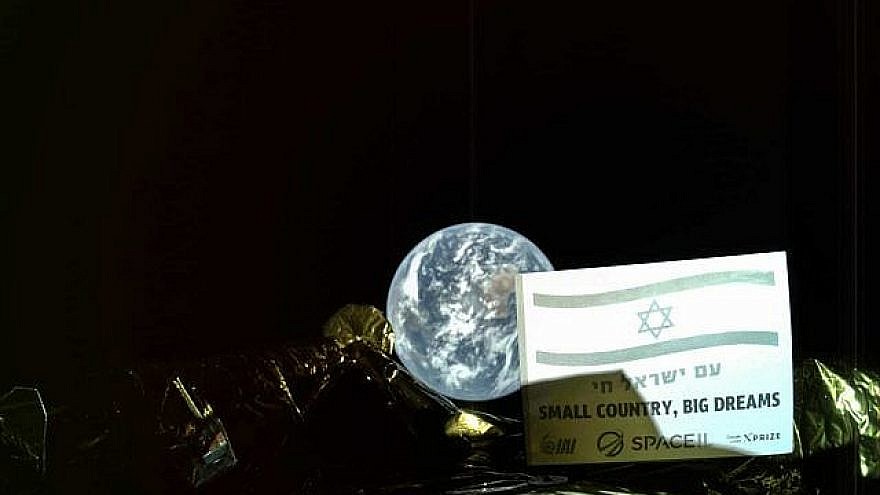 A photo by the “Beresheet” spacecraft, in which an Israeli flag can be seen on a plaque with the inscription, “Am Israel Chai,” or “the Jewish people lives,” and in English, “Small country, big dreams,” taken 37,600 kilometers from Earth. Credit: SpaceIL/IAI.
Republish this article
852 WORDS
Spread the word.
Help JNS grow!
Share now:

(July 15, 2021 / JNS) SpaceIL, an Israeli nonprofit organization that strives to inspire the next generation of scientists, engineers, and dreamers through innovative space missions, announced this week that it has secured crucial funding towards the launch of the “Beresheet 2” Spacecraft mission in 2024 with the goal of sending Israel back to the moon.

Unfortunately, on April 11 of that year during the landing process, a malfunction caused a series of disruptions that resulted in an engine shutting down and the spacecraft crashing.

Thanks to several generous donors, $70 million was raised in a new round of financing; it’s estimated that the cost of the mission is approximately $100 million.

The funding was obtained from a group of entrepreneurs and philanthropists, including Israeli billionaire Morris Kahn (Kahn Foundation), who was also involved in the first attempted moon landing. Kahn was also appointed chairman of the board of directors of SpaceIL.

The other two donors include Patrick Drahi (Patrick and Lina Drahi Foundation), an Israeli-French businessman, and South African Israeli businessman Martin Moshal through the Moshal Space Foundation in partnership with the Entrée Capital venture-capital firm.

In reaction to the announcement, Shimon Sarid, CEO of SpaceIL, told JNS, “It is too good to be true to raise this amount at such an early stage of the program. The reason it happened is that we have a highly inspiring mission, and our donors truly believe in our ability to execute it.”

The “Beresheet 2” mission is hoping to break several records in global space history, including a double landing on the moon in a single mission, along with landing on its far side, which to date has only been accomplished by China.

The main spacecraft is slated to undertake a five-year mission to serve as a platform for educational science activities in Israel and worldwide via a remote connection that will enable students to take part in deep-space scientific research.

In terms of the types of scientific research that will take place on the mission, Sarid explained that at this point, “we are setting up an academic committee to select the scientific mission, and it should have scientific value for humanity and educational value for our next generation. We are also communicating with NASA to be our partner in selecting the scientific payloads.” 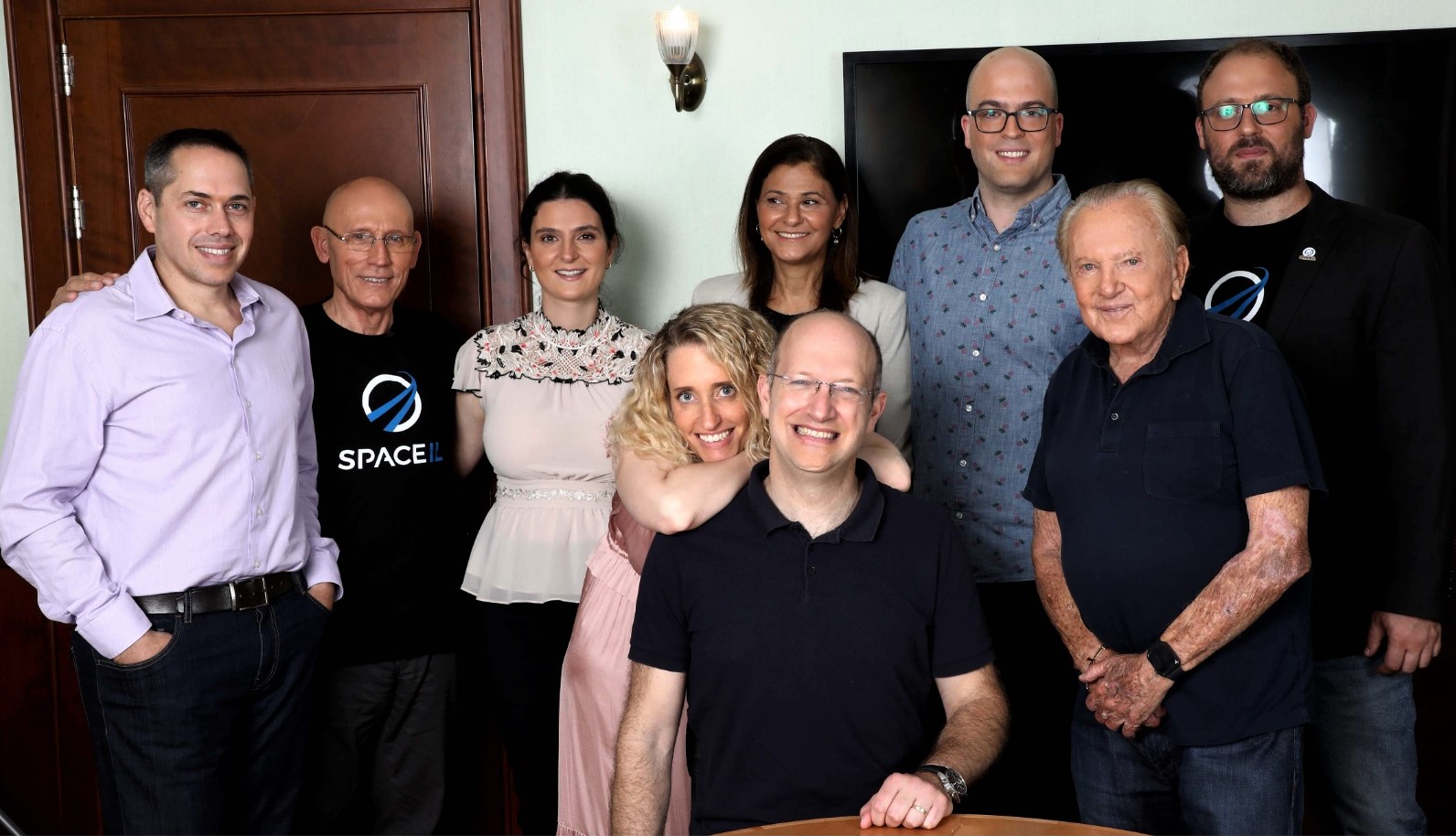 ‘Powered by the dreams and hopes of future engineers’

Kfir Damari, the co-founder of SpaceIL, as well as vice president of impact, brand and education of the organization, told JNS that “in September of 1962, U.S. President John F. Kennedy [in a speech at Rice University] said, ‘We chose to go to the moon in this decade and do the other things not because they are easy, but because they are hard.’ Many years later, I think a similar vision guided us. When we chose to go to the moon, we did it to do the impossible for Israel, for science and for education.”

He continued, saying “our mission was getting to the moon, but we also knew that this goal will serve to organize and measure the best of our energies and skills, and will also show the world—and mainly our children—that you should continue dreaming, pushing forward and never stop. Yes, we are building spacecrafts, but they are powered by the dreams and hopes of future dreamers, scientists and engineers.”

Kahn offered a reaction to the new funding in a statement acknowledging that getting Israel to the moon remains his life’s mission.

“The ‘Beresheet’ project is my life’s mission, so I decided to take it up again. I plan to do everything that is within my power to take Israel back to the moon—this time for a historic double landing,” he said. “As an entrepreneur, I believe that one should constantly seek new challenges and even double the risk. Our upcoming new mission will position Israel once more as a global pioneer, this time in space.”

Joining Kahn on the board are new directors Angelina Drahi, chairwoman of the Patrick and Lina Drahi Foundation; Amalia Zarka, general manager of the Drahi Philanthropic Foundation; Tal Granot-Goldstein, CEO of HOT Group; Frank Malul, CEO of i24news; Aviad Eyal, managing partner of Entrée Capital and the representative of the Moshal Space Foundation; and Dafna Jackson, CEO of the Kahn family office.

They will be welcomed by the existing board members, including Professor Isaac Ben-Israel, Avi Hasson, Arie Halsband and Ya’acov Levy.

Damari expressed his excitement for the aimed 2024 moon launch, thanks to securing 70 percent of the necessary funding.

He said that “we can now focus on the engineering and on the future impact of the mission—making sure we’re able to inspire the future generations in Israel and around the globe and have a significant contribution to deep space scientific research. … A heavy weight was lifted, and the countdown has begun!” 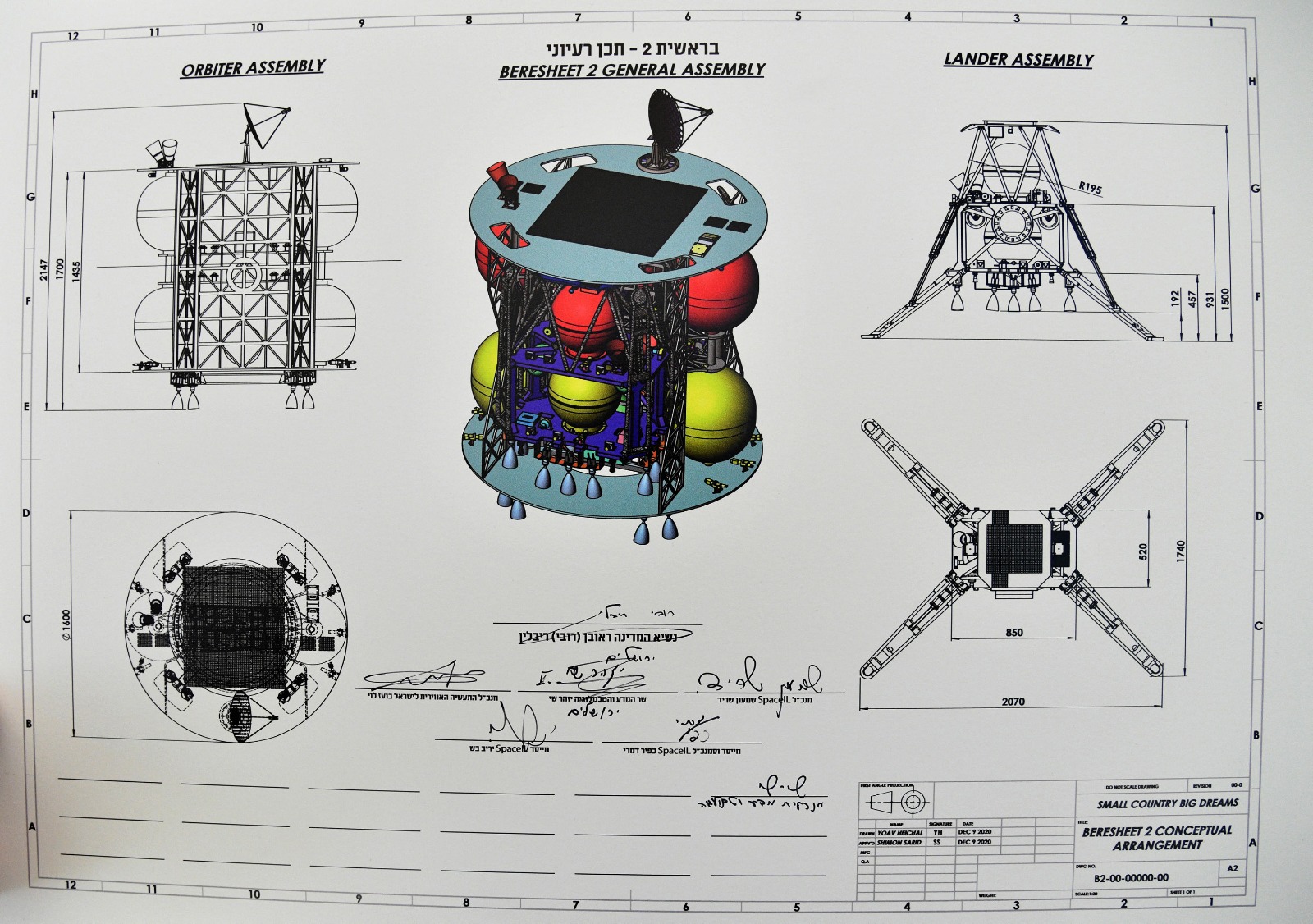 A schematic of the “Beresheet 2” lunar probe. Credit: Haim Zach/GPO.
Republish this article in your newspaper or website