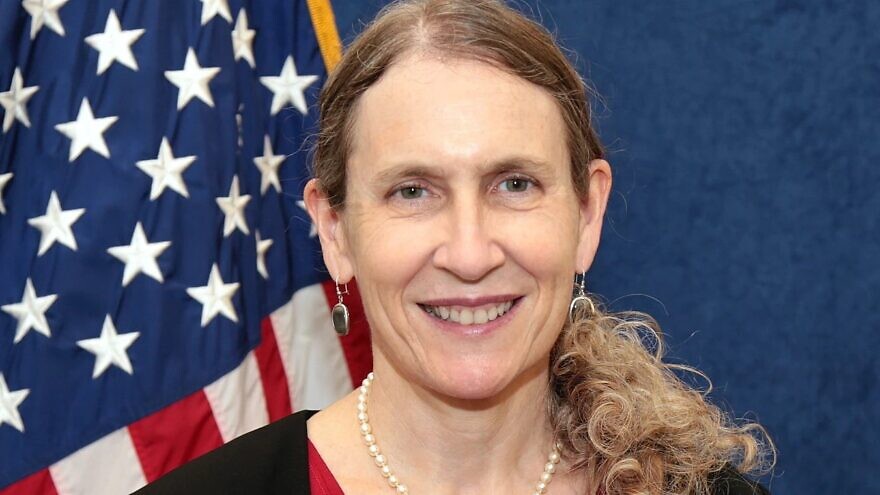 (February 1, 2022 / JNS) Ellen Germain, a career member of the Senior Foreign Service, assumed her duties as Special Envoy for Holocaust Issues in late August. A New York native, she has served in a variety of postings in Tel Aviv, Krakow, Baghdad, Moscow and elsewhere.

The Office of the Special Envoy for Holocaust Issues, established in 1999, develops and implements U.S. policy to return Holocaust-era assets to their rightful owners, secures compensation for Nazi-era crimes, and ensures that the Holocaust is remembered and commemorated appropriately.

Q: Thank you in advance at such a busy time—so many activities, so many remembrance events right now. What are you feeling after such an exhausting week on such a mentally exhausting topic?


A: It really has been an exhausting but inspiring week. It seems as if all over the world, including for the first time in Cairo and in Abu Dhabi, people are [holding] remembrance ceremonies and commemorations for Holocaust Remembrance Day, and that’s terrific because Holocaust survivors are naturally diminishing in number. And it’s so especially important now for us to hear their stories and honor their experiences.

Q: Part of the role of the special envoy is to make sure countries that may have had some culpability in the Holocaust continue, or in some cases, start efforts towards restitution. U.S. Ambassador to the United Nations Linda Thomas-Greenfield made note of that in her speech at the United Nations on Jan. 27. What more can countries still do at this point to ensure that restitution is made—not only to the dwindling number of survivors but to their descendants as well.

A: That’s a big part of what we do. My office deals with what I like to call “two baskets of issues.” One is restitution, and the other is promoting Holocaust education and accurate commemoration because there is so much distortion and denial these days. So on restitution, a lot of European countries have done very good things and made excellent progress on restitution or compensation for private property—things like houses or buildings that people owned and lived in before World War II. But there’s also communal and religious property—things like synagogues, schools, cemeteries, and then you have things like artwork—movable property, as we say. And so, all of those are areas that we promote and encourage countries to either set up methods or processes for people to enter claims or to pass laws, if that’s the way it’s going to work most easily in the country, so that survivors and their heirs have a method for pursuing claims. Most of the time, we’re not necessarily talking about restitution these days. Some countries have set up foundations or funds to sometimes pay out claims and sometimes to provide support to the remaining small Jewish community in the country. So, there are a lot of creative ways to make that acknowledgment that a great and terrible wrong was done and to provide, as we like to say, a measure of justice for Holocaust survivors and their heirs.

Q: You said you need to make sure the Holocaust is accurately commemorated. That’s a key phrase because as many experts have pointed out, there is less out-and-out Holocaust denial, but more and more Holocaust distortion, which in many ways, can be even more dangerous. How has your office made that transition from battling Holocaust denial to the more prevalent distortion that we’ve seen more of, especially through social media?

A: It’s a good question, and the two are very closely intertwined. But on Holocaust distortion, part of the issue is educating people and teaching them to recognize what Holocaust distortion is. And so, we work, for example, very closely with the International Holocaust Remembrance Alliance (IHRA), which is an organization of 35 countries dedicated to the accurate and truthful commemoration of the Holocaust. IHRA has produced, essentially, toolkits for policymakers [and] for educators to help them identify Holocaust distortion, and then suggest how they can counter it. How you can teach people to recognize it? And so, for example, particularly now during the pandemic, we’ve seen a lot of protesters wearing yellow Stars of David with anti-vaccination or other COVID-19-related slogans on them. And that comparison to COVID-19 restrictions, which are meant to protect public health, to Nazis forcing Jews to wear yellow Stars of David in order to identify them, round them up, deport them, and ultimately, murder them, is no comparison at all. It demeans and trivializes the uniquely horrific nature of the Holocaust.

Q: There was a somewhat historic resolution just passed in the U.N. General Assembly with the support of the United States to combat Holocaust denial and distortion. It’s an Israeli resolution that, in part, seeks to pressure or place some sort of leverage on social-media companies, in order for them to take responsibility for the disinformation, the distortion and the Holocaust denial that has permeated their platforms. Does the State Department have a position on pressuring social-media companies like Facebook, Twitter, etc., to clamp down on Holocaust denial and distortion? Has there been any discussion of that?

A: As I’m sure you know, there’s a big debate these days in the United States about whether social-media companies and platforms should be held in any way responsible for the content that third parties—mainly, their users—post. And there’s a whole debate about whether they should be regulated more. It’s an issue that’s very much under discussion in the United States, generally. For the State Department, what we’re trying to do is help educate and promote awareness of what Holocaust distortion and denial are, and work with both other countries and international organizations to help amplify and educate about the problem. And some companies have started taking action on their own. Sometimes, it’s after campaigns by Jewish groups or other international groups. I think it was at the end of 2020, Facebook agreed to take down posts that were Holocaust denial posts; I believe another social-media company followed suit. But even when companies do try to do that, it’s very hard to identify everything that would fall under that rubric.

Q: A new State Department social-media public campaign launched last week to highlight State Department employees who are descendants of Holocaust survivors. I didn’t realize—probably the general public doesn’t realize—that there are enough of these employees to develop a campaign of this kind. Can you give us some more insight on it, as well as any findings from speaking with them about their related experiences through their families?

A: I’d be delighted to, because we’re very proud of this campaign. And I have to tell you, it was actually inspired in part by the Israeli “Zikaron BaSalon” [“Memories in the Living Room”] [social] initiative because we heard [it] was starting to bring second- and third-generation survivors and descendants of survivors into small intimate discussions about the Holocaust, sharing experiences. And, of course, [U.S.] Secretary of State [Antony] Blinken is the stepson of a Holocaust survivor. So, putting those two together, we decided that it would be unusual and really meaningful to see if we could get State Department employees who were also descendants of Holocaust survivors to talk about how their experience influenced them to enter public service. I was surprised as well that we had as many people in the Foreign Service and in the Civil Service in the State Department who have some kind of personal connection. And what we’re finding is that these stories are one of the best ways for people to understand what the Holocaust means and how it affected—and still affects—their colleagues at work, their friends. It’s a very direct way of making people understand at least a little bit of why the Holocaust matters and why its consequences reverberate to today.

Q: We see the phrase “Never Again” trending, and then the next week, it disappears. How does your office and those who work on these issues year-round keep that idea and Holocaust-related issues in general in the spotlight to make sure that memory is kept alive and justice served? How is a full calendar kept on an issue such as this?

A: Unfortunately, there is always enough—in fact, too much—to do on these issues. There are so many that the State Department has a separate Office of the Special Envoy for Countering Anti-Semitism because we place such a focus on anti-Semitism and on Holocaust issues. And, of course, we work very closely together. Much of our work involves working with other countries in classic diplomatic fashion to talk to them about how they are formally commemorating the Holocaust in their countries, are they establishing educational programs on it? And, of course, we work with other countries to encourage them to set up a process for restitution. That’s ongoing. Just last year, Luxembourg signed a groundbreaking agreement on certain aspects of restitution. So, there’s unfortunately always more work to be done on all of these issues. I started really focusing my office more on Holocaust distortion and denial just and how we can work together internationally to counter and alert people to how much of a problem it really is.