(January 20, 2022 / JNS) The first time, it was about remembrance. This time, it’s about preserving those memories.

On Thursday, an Israeli-led resolution calling for a clear definition of Holocaust denial and concrete steps to fight it, passed the U.N. General Assembly by consensus. A total of 114 countries joined in as co-sponsors, including a deluge in the final moments before its passage, on a project that Israeli Ambassador to the United Nations Gilad Erdan called his most important initiative in New York. Even diplomatic foes like Ireland and Turkey were early supporters of the resolution.

Symbolically, Germany asked in the early stages of the resolution’s drafting to place its name as a co-sponsor. Jan. 20 marks the 80th anniversary of the Wannsee Conference, when Nazi leaders met at a villa on the shores of Berlin’s Wannsee Lake to discuss the systematic murder of as many as 11 million Jews in Europe. The minutes from the 1942 meeting have been preserved to this day, making it a symbol of the genocide that was already underway at the time.

The resolution calls for the adoption of the International Holocaust Remembrance Alliance’s (IHRA) working definition of anti-Semitism, which includes provisions on Holocaust denial. It also resolves for U.N. member states and U.N. agencies to promote Holocaust education and awareness.

The only country publicly opposed to the resolution couldn’t vote on it. The Islamic Republic of Iran, whose regime has made an art of Holocaust denial, spoke out, with its ambassador claiming that Israel exploits “the suffering of Jewish people in the past as cover for the crimes it has perpetrated over the past seven decades against regional countries.” Due to its failure to pay its dues for the last two years, Iran was stripped of its U.N. voting rights earlier this month and could not request a full roll-call vote.

Nations as wide-ranging politically as Guatemala, Cyprus, Ukraine, Russia, the United Kingdom, Egypt and Italy were among those whose representatives requested floor time to speak in favor of the resolution.

Erdan started his address with the retelling of a Transylvanian family of Chaim, Bracha and their eight children, all killed by Nazis, using their story as an example of the methodical, historical documentation of the Holocaust.

“While the survivors and their liberators have spent years telling their stories, the Nazis left their own irrefutable proof. The Nazis took so much pride in their well-oiled killing machine that they took the effort—at least at the beginning of the war—to keep careful records of their crimes, making the Holocaust the most meticulously documented genocide in history,” he said to the General Assembly. 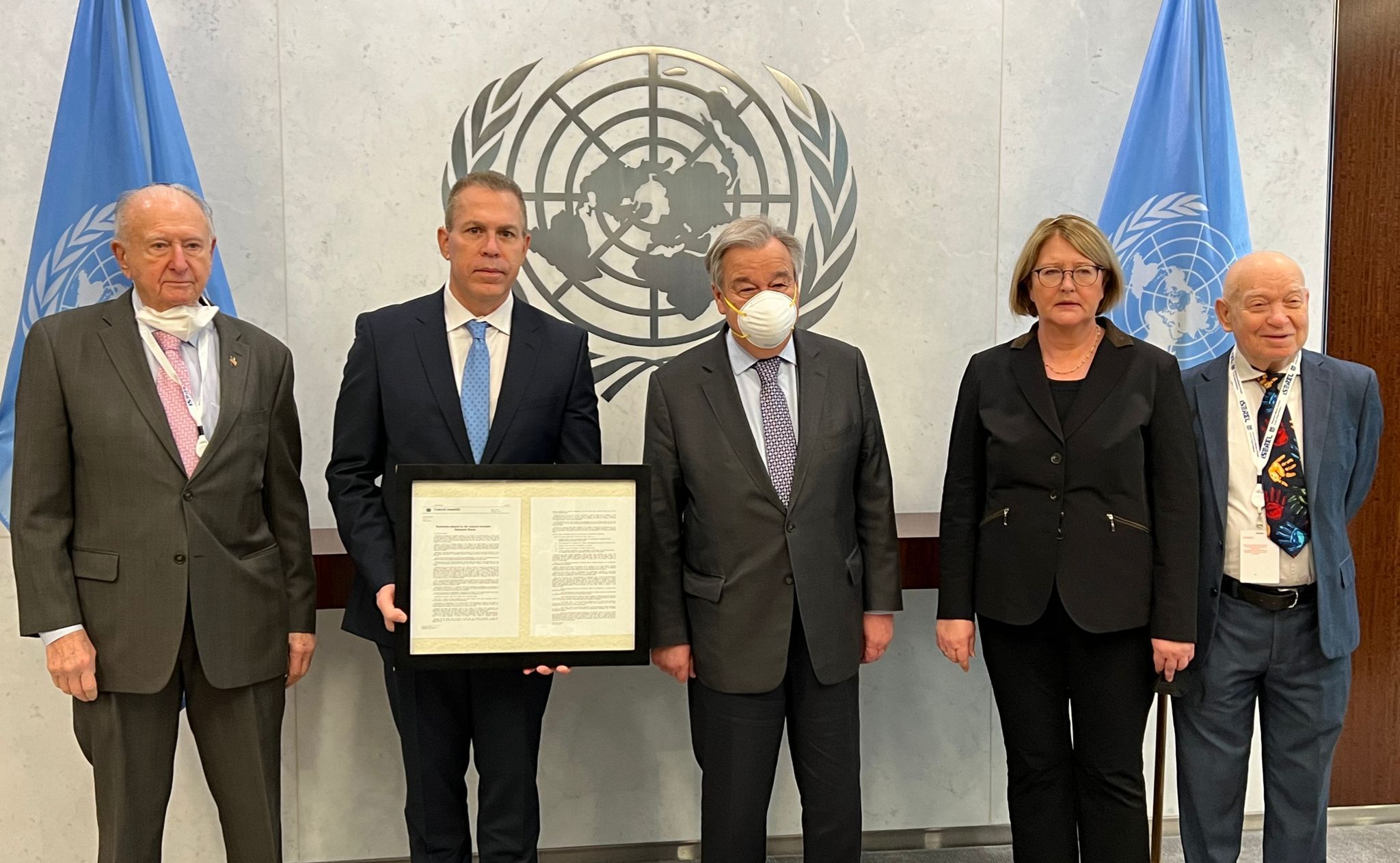 In fact, five of the dwindling number of Holocaust survivors in the region were invited to watch from the General Assembly plenum and to take pictures with Erdan. Pfizer CEO Albert Bourla, the son of Holocaust survivors and winner of this year’s Genesis Prize, also attended. Rabbi Allen Schwartz of Manhattan’s Congregation Ohab Zedek accompanied 96-year-old Auschwitz survivor Hilde Khnie.

“My experience watching the survivors today was that in some ways, they were reliving it all, but they also seemed exhilarated,” Schwartz told JNS. “Every survivor has a different way of expressing their grief. Hilde was upbeat, amazed at the fanfare and found sitting in the General Assembly to be quite the experience.”

Erdan focused the gathered diplomats’ attention on a sea change in Holocaust revisionism—from outright denial to a blatant distortion—indirectly calling out Iran in the process.

“People were killed, but systematic genocide? Concentration camps existed, but gas chambers? The Jews were targeted, but weren’t they to blame? While these distortions and lies differ from denial, they both stem from the same source of bigotry, hatred and vehement anti-Semitism,” described Erdan.

“And this newer form of fabrication and Jew-hatred is not only spread by extremists and fringe groups. Nations with seats in this hall openly deny the Holocaust, casting doubt on its occurrence and praising its perpetrators. Some have even run cartoon contests seeking the best cartoon mocking the Holocaust. In fact, those that most blatantly deny that Jews suffered a genocide are the ones now threatening Jews with another genocide,” he said.

‘Special duty to help preserve the memory of the Holocaust’

Poland, which has engaged in a diplomatic tussle with Israel over its own revisionist outlook on the Holocaust, jumped on as an early co-sponsor of Erdan’s resolution.

“Fighting and preventing Holocaust denial has a special importance for Poland. Among the millions of Jewish victims exterminated as a result of the implementation of murderous anti-Semitic ideology of German Nazism, 3 million were Polish citizens,” said Polish Ambassador to the United Nations Krzysztof Szczerski. “Next to the Jewish people, we, the Poles, took upon ourselves a special duty to help preserve the memory of the Holocaust. The Poles stood to fight against German occupation. Many risked their lives to rescue Jewish victims and to alarm the world about the truth of the Holocaust.”

The Israeli resolution puts a special onus on social-media companies to take responsibility for the growing Holocaust-denial content on their platforms and to take concrete measures to crack down on Holocaust-related disinformation and conspiracy theories.

“As the number of survivors dwindles, the younger generations are being indoctrinated on social media to doubt reality and trust deception,” said Erdan. “And while the Internet turns into a vile breeding ground of deceit, social-media platforms are shirking their responsibility.”

Thursday marked just the second time since Israel’s establishment that the U.N. General Assembly adopted an Israeli resolution. The only prior time was in 2005, when an Israeli resolution, appropriately enough, established Jan. 27—the anniversary of the liberation of the Auschwitz death camp—as International Holocaust Remembrance Day.