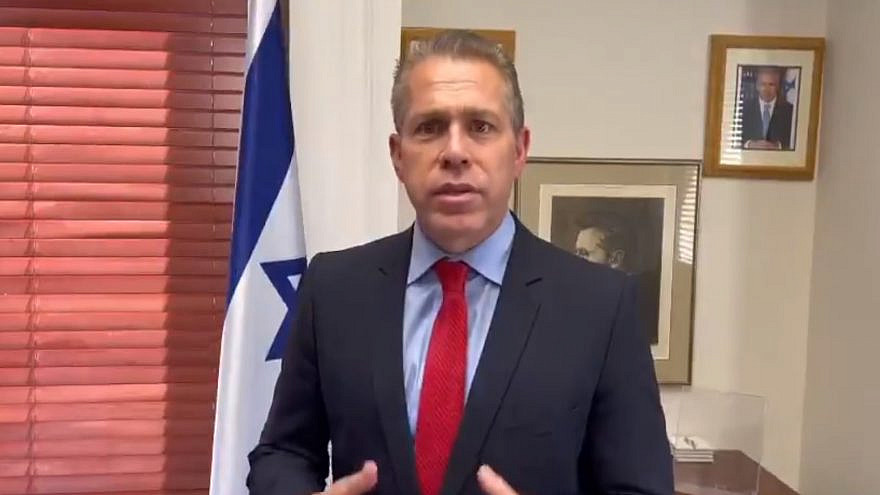 (April 22, 2021 / JNS) Israel’s Ambassador to the United Nations Gilad Erdan castigated the U.N. Security Council on Thursday for failing to address Iran’s behavior while wasting its time on endless discussions about the Israeli-Palestinian conflict.

“Iran’s relentless attempts to acquire military nuclear capabilities, its terrorist proxies that continue to destabilize the region and its grave human rights violations remain the most substantial threat to peace and security in the Middle East,” he said during the council’s quarterly debate on “The situation in the Middle East, including the Palestinian Question.”

He stated that “this council does not take the steps necessary to stop Iran. It continues to ignore the most pressing matter in the Middle East and instead, wastes these debates recycling useless discussions on the Israeli-Palestinian conflict, despite the fact that the Abraham Accords have clearly proven this is not the issue–Iran is.”

Erdan added that “if the council wants to play a conducive role in bringing stability to the region, it must not cling on to approaches that have failed time and again because of the Palestinian rejectionism.”

He stressed that returning to the Iran nuclear agreement would be a serious mistake, saying, “just like in 2015, the fanatical ayatollahs will use sanction relief to fund their terrorist activities and continue to secretly develop their military nuclear program. All they will have to do is wait for the agreement to expire by 2030. Then, they will have international legitimacy to have thousands of advanced centrifuges enriching uranium and their breakout time will be almost down to zero, as [former] President [Barack] Obama himself admitted.”

“For Israel, Iran poses an existential threat,” he stressed. “That is why we will not see ourselves bound by any agreement that does not fully address the threat against the existence of the State of Israel. And every one of you would do the same if you were in our shoes, particularly in light of the Holocaust.”

“The fact that Hamas is being allowed to run in the upcoming elections and is predicted to increase its power should be worrying for this body. It should be worrying for everyone,” he said. “I hope that you will at least address how this institution will be able to continue to work with the Palestinian Authority if Hamas increases its power in the upcoming elections and becomes an official part of the Palestinian Authority.”

“As then-Sen. [Joe] Biden mentioned in his remarks on the Palestinian Anti-Terrorism act in 2006, the political rise of Hamas presents a challenge. Hamas does not even come close to meeting the Quartet’s three requirements,” said Erdan. “This is the most important issue to address in regards to the conflict. Not recycled old false accusations.”