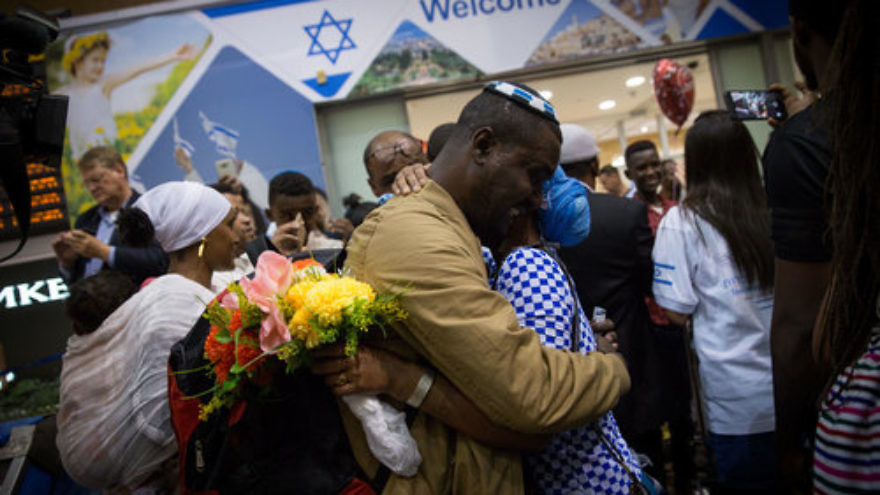 Ethiopian Jews are greeted by family members as they arrive at Israel’s Ben-Gurion Airport, as part of an aliyah flight arranged by the Jewish Agency for Israel and sponsored by the International Christian Embassy Jerusalem in June 2017. Credit: Miriam Alster/Flash90.
Republish this article
766 WORDS
Spread the word.
Help JNS grow!
Share now:

Despite relative isolation from their Jewish brethren around the world for millennia, Ethiopian Jews have coveted the same dream of celebrating Rosh Hashanah “next year in Jerusalem.”

Though unique, the Jewish New Year festivities in Ethiopia bear many similarities to the holiday’s observance in the broader diaspora.

Limor Malessa and five of her siblings were born and raised in a small Ethiopian village near the Jewish community of Gondar. She left the village at age 13 and traveled to Ethiopia’s capital of Addis Ababa, along with her parents and five siblings, in anticipation of emigrating to Israel—the “promised land” that Ethiopian Jews longed to return to for thousands of years, unaware that the holy temple in Jerusalem had long since been destroyed. (Gaps in access to modern technology and their distance from other Jewish communities meant many Ethiopian Jews, up until about 20 years ago, lacked some basic knowledge about major episodes in Jewish history.)

In 1991, at age 15, the aliyah for Malessa and her family officially began when Israel’s Mossad intelligence agency privately smuggled the family out of Ethiopia’s capital city to the Jewish homeland by way of Italy.

The family arrived in Israel just a month before the Mossad conducted a massive clandestine airlift operation, dubbed “Operation Solomon,” which saw some 14,000 Ethiopian Jews secretly airlifted out of Ethiopia aboard 35 non-stop flights to Israel in 36 hours. Malessa has now lived in Israel for more than 30 years, building a family of eight children in the city of Ashdod and becoming thoroughly integrated into Israeli society.

Due to the small size of Malessa’s village in comparison to other Jewish Ethiopian townships, not many “kessim”—elder religious leaders with knowledge of oral Jewish law and the equivalent of rabbis—resided in her home village. This “would make my childhood memories of Rosh Hashanah less vivid than of those who grew up with many kessim in their villages,” Malessa told JNS.org in Ethiopian-accented Hebrew.

The Ethiopian villagers were entirely dependent on the verbally disseminated wisdom of the elders, who were the only people in the village capable of reading Jewish texts written in the ancient Ge’ez dialect.

“The kessim would instruct everyone in the villages on how to prepare for the holiday….Villages that had more of the religious leaders would have a much deeper understanding of the holiday and its laws,” Malessa said.

In Amharic, which is rooted in the Ge’ez dialect and is the official language of Ethiopia, Rosh Hashanah is called “Brenha Serkan,” which essentially means “the rising of the dawn,” said Malessa. In keeping with the meaning of holiday’s name, the kessim “would rise before dawn on the holy day, to begin the first prayer service of the day before sunrise,” she said.

In Ethiopia, Rosh Hashanah was—and still is—observed during the course of one day, in contrast to the two days observed in the rest of the Jewish diaspora and in Israel. The Ethiopian Rosh Hashanah is comprised of three prayer services: before dawn, in the afternoon and in the evening. There are four prayer services in the broader Jewish world for Rosh Hashanah, and none begin before sunrise.

“The holiday also has another name, ‘Zikir,’ which is similar to the Hebrew word for remember, ‘zachor,’” Malessa said.

Similar to the custom in other diaspora Jewish communities, “everyone in the village wears new clean white clothes” for Zikir, she said, while it is “also customary for affluent people in the village to have very large feasts and invite others in the village to join in the festivities.” The festivities are meant to remind people of the day’s holiness, and to “make sure that during the holiday not a single Jew is left without food and enjoyment,” according to Malessa.

“People serve lamb—the most expensive meat available—and have special meals to observe the mitzvah of feeding their Jewish brothers and sisters,” she said.

Malessa’s mother, Esther Lakau, who lives in the Israeli coastal city of Ashkelon, said she “remembers hearing the kessim sound the shofar on the holiday.”

“Everyone in the village prepared the food for the holiday a day in advance,” Lakau told JNS.org.

“The kessim would read from the holy scripts in Ge’ez and tell the history of the Jewish people,” she said. “They would speak of Abraham, Yitzhak and Yaakov, our great patriarchs and matriarchs, and the lessons we could learn from them in the present….Most importantly, the kessim would emphasize our long-held aspiration to celebrate Rosh Hashanah ‘next year in Jerusalem.’”