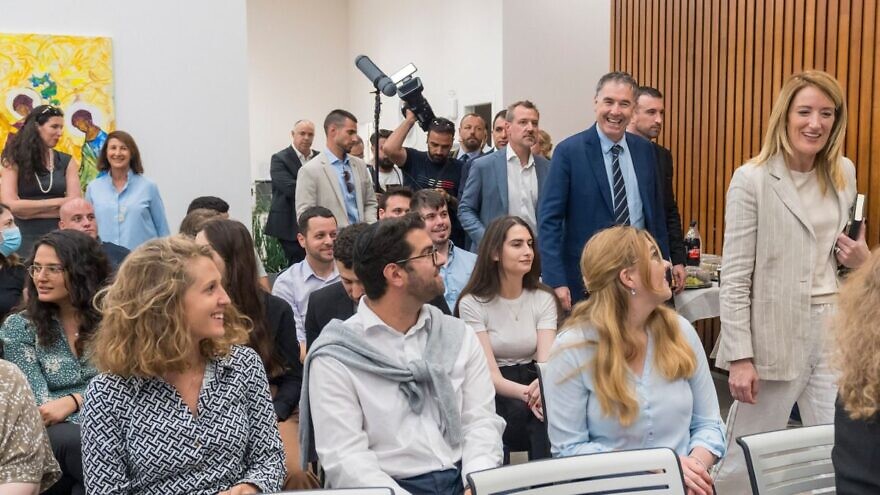 (May 23, 2022 / JNS) European Parliament president Roberta Metsola began her trip to Israel on Sunday with a visit to Tel Aviv University and the Yad Vashem Holocaust Remembrance Center in Jerusalem.

After her visit to TAU, Metsola tweeted that she had been impressed by “the engagement, the questions and ideas put forward by students.”

“Always good to listen and discuss the future with young people—where there is dialogue there is hope,” she wrote.

During her tour of Yad Vashem, Metsola visited the Flashes of Memory exhibit and took part in a memorial ceremony in the Hall of Remembrance, as well as the Children’s Memorial.

Prior to her arrival in Israel, Metsola had criticized a decision by Israel to ban European Parliament member Manu Pineda, a Spanish communist politician who has called for a boycott of Israel, and the chairman of the European Parliament Delegation for Relations with Palestine.

“I regret the decision to refuse entry to Israel to Manu Pineda,” Metsola tweeted prior to her arrival. “I will raise the issue directly with authorities concerned.  Respect for MEPs and the European Parliament is essential for good relations,” she stated.

Kan News quoted an Israeli political source on Sunday as saying “in light of his anti-Israel activity, it was decided to refuse entry to MEP Manu Pineda. There is no basis for the State of Israel approving the entry to those who encourage a boycott of it.”