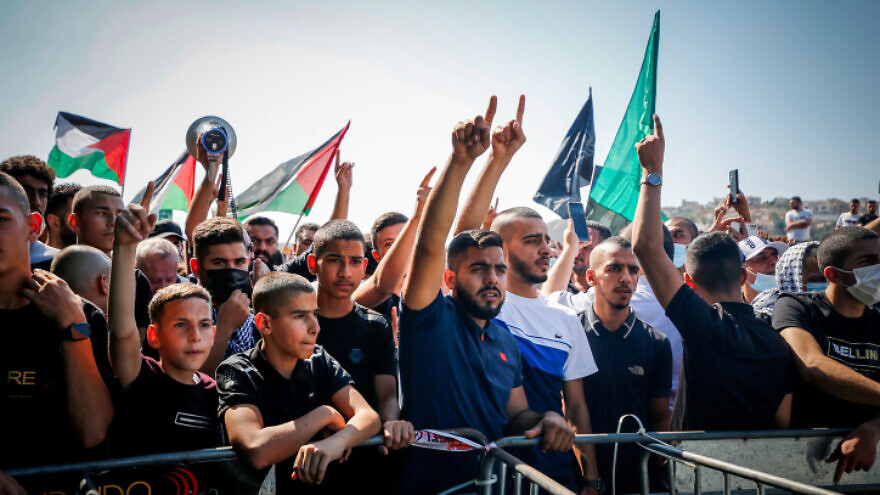 (February 11, 2022 / JNS) At the end of the Muslim month of Ramadan last May, which coincided with Israel’s Jerusalem Day celebrating Israel’s victory in the Six-Day War in June 1967, intense Arab violence erupted in Jerusalem. This served as a catalyst for Hamas to fire rockets at Israel, some aimed at Jerusalem. Massive Arab violence soon followed in mixed Israeli cities where Jews and Arabs live as neighbors, including Lod, Akko, Jaffa and Ramle.

According to the Jerusalem Center for Public Affairs (JCPA), the riots included expressions of dangerous physical violence against Jews and Jewish property, damage to the symbols of the state, and verbal violence and incitement against the state, its identity, its citizens and its security.”

Events in the Middle East move fast and multiple other issues have occupied the minds of Israelis since then, but the question remains: Where do Israeli-Arabs fit into the State of Israel, and what is preventing them from carrying out further violence in the future?

The JCPA held an online conference on Feb. 9 during which it presented its latest research, titled “An In-Depth Analysis of the Forces Driving the Israeli Arab Riots of May 2021.” The material analyzed in depth the factors that led to this wave of violence, its leadership and its participants.

Yossi Kuperwasser, director of the Project on Regional Middle East Developments at the JCPA, wrote that “many Israeli Arabs see themselves as Palestinians … they fully adopt the Palestinian narrative. They deny the very existence of a Jewish people and its sovereign, historical connection to the Land of Israel. They expect that the Jews will eventually be forced to leave and … the Palestinians will fulfill their claim of ‘right of return’ to their homes from which they were temporarily displaced in the nakba [‘catastrophe’] of 1948.”

Many Palestinians and some Israeli-Arabs consider the establishment of the State of Israel in 1948 to be a disaster. Hundreds of thousands of Arabs fled—many on their own accord or at the behest of Arab leaders—during Israel’s War of Independence. This event was preceded by the surrounding Arab countries’ rejection of U.N. Partition Resolution 181, after which they proceeded to attack the nascent Jewish state in order to drive out or kill its Jewish residents.

According to Kuperwasser, the riots “exposed the intensity of the hostility of some of the Arab population in Israel towards the prevailing order in the state and, in practice, showed their animosity towards Israel’s very existence as a Jewish and democratic state.”

He warned that this telling event could “indicate the potential for further, perhaps even more serious flare-ups, given a volatile event that will ignite the fumes again.”

Kuperwasser also pointed to the violent riots by Bedouin in January in response to tree-planting in the Negev as a “signal of this dangerous potential.”

“While many Israeli Arabs did not participate in the violent riots, only a few spoke out against it. … Many Arab community leaders relied on sophistry to justify the violence,” he noted.

Kuperwasser said Israel should “outlaw the radical Northern Branch of the Islamic Movement and prohibit the inciting activities of its former members.”

He added that it is “imperative to address those groups working to delegitimize Israel with the libel of conducting apartheid practices against Israeli Arabs, thereby fanning the flames.”

‘A connection to the state’

Journalist Nadav Shragai noted the prevalent “preoccupation and discourse” among Israeli Arabs regarding the nakba and the “hope of exercising the ‘right of return’ to the places where Arabs lived before 1948.”

He noted that many Israeli Arabs define themselves as Palestinian, and that Arab Knesset members and public figures often declare that they reside in “Palestine,” but not Israel.

However, Shragai pointed out that “alongside these ‘Palestinian’ Israelis, there is also a large Arab public in Israel that sees itself as Israeli and feels a connection to the state.”

According to Shragai, the general understanding among Jewish Israelis is that the real purpose of the Arab call for the Palestinian “right of return” is “the destruction of the State of Israel.”

He said “anyone who acts violently must be arrested and criminal proceedings opened against him. There is no alternative to returning Israeli governance over all areas of the state.”

“If and when the Arabs of eastern Jerusalem really begin an intifada, it will create a very serious risk to the unity of Jerusalem,” he warned.

Inbari recommended that Israel “consider the establishment of a National Guard to deal with the problem of crime in Israel and the lack of governance within Israel.”

‘A hostile stance towards the Zionist movement’

Jonathan D. Halevi, a former IDF military intelligence officer specializing in the Middle East and radical Islam, placed a spotlight on the United Arab List Party (Ra’am), currently part of the governing coalition, explaining how the ideologies of the party and its leader Mansour Abbas are potentially dangerous for Israel.

The charter of the Ra’am Party, according to Halevi, “takes a fundamentally hostile stance towards the Zionist movement and the State of Israel, and views the implementation of the ‘right of return’ as the basis for achieving ‘peace.’ ”

According to Halevi, Abbas “completely denies the significance of the Jews’ religious bond with Jerusalem” and views the terrorist organization Hamas as a legitimate actor.

Halevi suggested Abbas’s “pragmatism” veils his ulterior motive, which is to build “a more united Arab society under the flag of nationalism and Islam in order to pursue goals in the political arena.”

“These include supporting the Palestinian organizations against Israel both politically and in the conflict itself, demanding a full Israeli withdrawal to the June 1967 lines” and demanding a right of return for millions of Palestinian “refugees,” “which in practice means the destruction of the State of Israel,” he wrote.