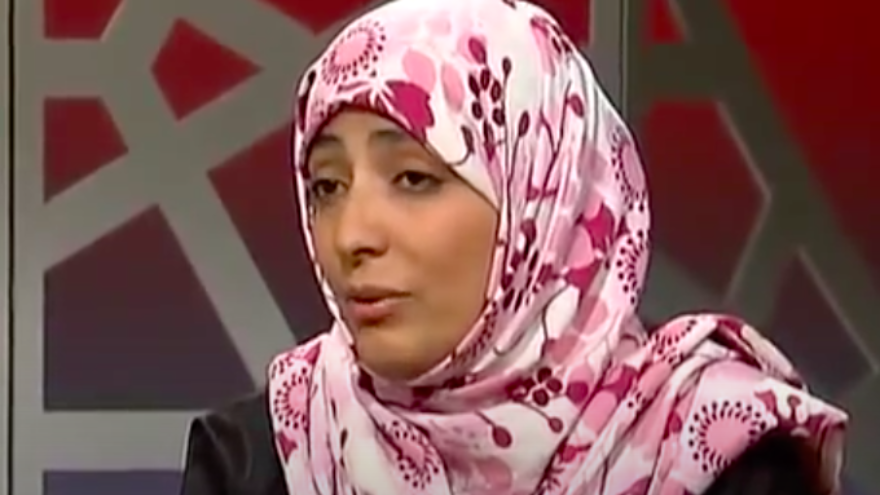 (May 13, 2020 / JNS) Among the first 20 members Facebook announced last week to its new and independent oversight board is Peace Prize Nobel laureate Tawakkol Karman, a former member of the Muslim Brotherhood-linked Al Islah Party in Yemen.

Nicknamed by some as Facebook’s “Supreme Court,” the independent oversight body has been tasked with making decisions on controversial content issues, including online extremism, hate speech, harassment, and user privacy and security related to Facebook and Instagram, which is owned by the former.

“We are all committed to freedom of expression within the framework of international norms of human rights,” wrote the four co-chairs of the board in a May 6 New York Times opinion piece.

However, Karman has a history of praising the Muslim Brotherhood, which is known to be an extremist movement.

According to the Middle East Media Research Institute (MEMRI), Karman said in a Sept. 15, 2013, BBC Arabic interview: “The most important achievement of the January [2011] Revolution [in Egypt] was the abolishment of the emergency law. Unfortunately, the July 3 [2013] coup reinstated that law. The Muslim Brotherhood and its supporters, who oppose the military rule, are engaged in a legendary struggle, which they are waging with their blood, their resolute steadfastness, and their belief that they will restore the revolution to its true path.”

A year ago, Karman posted on Facebook, “The Muslim Brotherhood movement will remain an anti-tyranny and a freedom fighting movement, despite [U.S. President Donald] Trump’s nose and Trump’s agents and it is one of the victims of tyranny and official terrorism in the region, for which Trump provides all support and support.”

In a statement, Facebook said, “The members announced today reflect a wide range of views and experiences. They have lived in over 27 countries, speak at least 29 languages and are all committed to the mission of the Oversight Board. We expect them to make some decisions that we, at Facebook, will not always agree with—but that’s the point: they are truly autonomous in their exercise of independent judgment.

“We also expect that the board’s membership itself will face criticism. But its long-term success depends on it having members who bring different perspectives and expertise to bear.”

The board members will serve fixed three-year terms, with a three-term maximum.

“We cannot be removed by Facebook,” they wrote in The New York Times. “Facebook’s chief executive, Mark Zuckerberg, has also personally committed to this arrangement.”

New York-based human-rights lawyer and national security analyst Irina Tsukerman tweeted, “Why, out of 1.7 billion Muslims in the world, is FB putting an Islamist on its Supreme Court?”

Why, out of 1.7 billion Muslims in the world, is FB putting an Islamist on its Supreme Court?
1. Qatar $
2. They may believe MB represents Muslims or at least US Muslims & is “democratic”
3. Advantageous political alliance to control information sphere, where the real war is.