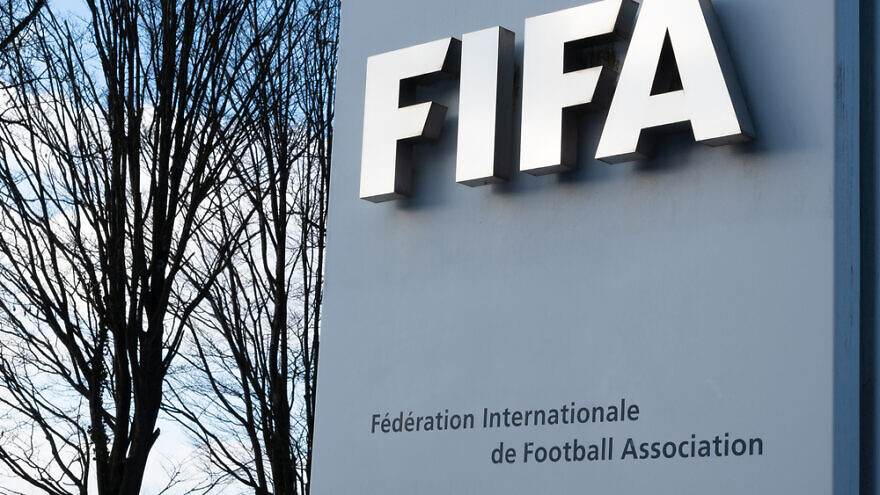 Four out of the five incidents occurred surrounding an “Arab Legends vs. World Legends” match featuring retired former star players to kick off the tournament. The FIFA Arab Cup served as a prelude to the upcoming 2022 FIFA World Cup to be hosted later this year by Qatar.

According to UKLFI, three Algerian players boycotted the Arab Legends vs. World Legends match because Israeli Avram Grant was coaching the World Legends Team. During the same match, a number of players from Saudi Arabia, Syria, Iraq and Qatar defaced their jerseys featuring flags of all FIFA member nations, by blotting out the Israeli flag.

In addition, Syrian player Firas Al-Khatib took part in the match, despite defacing his shirt and blotting out the Israeli flag. As a result, the Syrian Olympic Committee and the General Sports Federation Organization expelled him for playing in future matches since the opposing team had an Israeli on the coaching staff.

Also, UKLFI wrote that following the match, the president of the Palestine Football Association (PFA) Gen. Jibril Rajoub sent a letter to the Moroccan and Emirati football association, condemning players from those countries for participating since Israelis were involved and called on them to boycott such events.

Rajoub stated that engagement with Israel on the football field is a “serious and deep stab in the heart of every free Arab” and an “insult to the Palestinian struggle.” He told Arab teams not to “fall into the trap of a Nazi occupation” and not to shake hands “covered in the blood of Palestinian children.”

Finally, according to the UKLFI, throughout the tournament, the Palestinian flag was routinely displayed by players and officials with no direct connection to those territories. UKLFI explained that “signaling support for the Palestinian administration in political and physical opposition to Israel is a contemptuous, discriminatory and denigratory action offending the dignity and integrity of Israel.”

‘Not tolerate this type of behavior’

Sam Green, a director of UKLFI told JNS that his organization expects FIFA to uphold their “Code of Ethics and Statutes” and take action against those who discriminated against Israel during the tournament.

However, he explained, “there is a broader picture here. Sports are the gateway to normalization. If you can exclude Israelis from international sporting competitions, you are saying that it is acceptable to do so. But we’re saying it’s not acceptable.”

He added that “once organizations start enforcing anti-discrimination rules when it comes to Israel, they are sending a message that Israelis are acceptable not only in sports but in all areas of life.”

Green said FIFA needs to follow through and levy fines or sanctions against players or coaches who are well-to-do, stressing that what’s important here is that FIFA take symbolic action. Of course, in the case of the legends players already retired, it won’t truly harm them.

“The players that blacked out the Israeli flags on their shirts, those were symbolic moves,” he said. As such, “FIFA must take steps to symbolically show, they are not going to tolerate this type of behavior.”

FIFA did not respond to a JNS request for comment on the anti-Israel behavior at the tournament.

At the same time, Green was pleasantly surprised that Iran’s Football Federation supported former national team captain Mehdi Mahdavikia not only for playing in the legends match, but for wearing the jersey with the Israeli flag on display. Mahdavikia did come under attack by senior Iranian lawmakers and government-run news outlets for his participation.

Shlomi Barzel, the Israel Football Association’s Head of Communications, responded to the anti-Israel incidents at the Doha tournament, telling JNS: “Every boycott is sinful for the real purpose of sport—to bring people together, to connect, to bridge gaps and to play by uniform rules. We are sorry that even an event whose whole purpose is a unifying message has been exploited by a minority of participants for an unjustified act. …. We will continue to be a part of every competition, proudly representing our country, and promoting unity and cooperation through sport.”

Israeli athletes and sports teams have faced discrimination and boycotts for decades by athletes and countries they represent throughout the Arab and Muslim world.

Last month, Malaysia refused entry to Israeli athletes for the World Men’s Team Squash Championships. Despite lobbying efforts by the World Squash Federation to allow Israelis to participate, Malaysia stood its ground. The federation therefore canceled the event, criticizing the country for refusing to hold an open and inclusive tournament.

In the 2021 Tokyo Summer Olympics, several judokas from Muslim countries forfeited their matches choosing to throw away years of training instead of facing their scheduled Israeli competitors.

That said, Green explained that his organization has seen some Arab and Muslim countries change their tune when it comes to Israel. In October 2017, Israeli judokas had to compete in the Abu Dhabi Grand Slam without any reference to Israel. When Tal Flicker won a gold medal, the anthem of the International Judo Federation (IJF) was played and its flag flown, instead of “Hatikvah” and the Israeli flag.

The UKLFI stepped in and wrote a letter to the IJF saying that what had occurred was unacceptable. The IJF took action threatening to suspend future tournaments in the UAE until they stopped discrimination against Israel.

The advocacy by the UKLFI bore fruit when, a year later in October 2018, Israeli judokas Sagi Muki and Peter Paltchik won gold medals at that same event; “Hatikvah” was played and the Israeli flag was flown in the stadium in the presence of Knesset member Miri Regev, also Israeli Minister of Culture and Sport at the time.

Green said that the new reality “showed that attitudes towards Israel were changing in the Gulf.” And, in fact, he said, “that [event] has been credited by the Israeli government as the start of the Abraham Accords. If you want a symbol of what sport really means, there is no better one than that.”