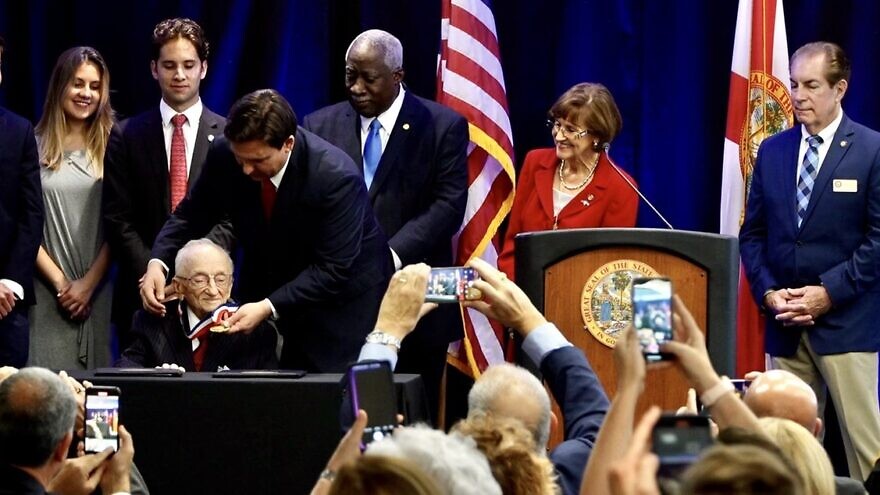 (April 8, 2022 / JNS) A 103-year-old man was awarded the Governor’s Medal of Freedom on Thursday by Florida Gov. Ron DeSantis in recognition of his bravery and determination to see Nazis brought to justice.

The award was presented to Ben Ferencz, the last living prosecutor of the Nuremberg trials, in recognition of his “valiant service during World War II to defeat Nazi Germany and then hold accountable the perpetrators of the Holocaust.”

“Ben Ferencz held the Nazis accountable for the atrocities they committed in perpetrating the Holocaust, and it is because of his work as the chief prosecutor for the United States at the Nuremberg war-crimes trials that we have the fortitude today to say never again will we let a tragedy like the Holocaust occur,” said DeSantis. “As the last surviving Nuremberg prosecutor, Ben Ferencz is a living legend, and we are proud that he is a Florida resident.”

DeSantis said that in addition to presenting the award, he hoped that it would help “further the legacy of people like Ben. I want kids in our schools to be learning about him 10, 15, 20 years in the future … to make sure that people understand the evils of the Holocaust and the heroism that we see on this stage.”

Speaking during the ceremony, Ferencz said that he had hoped by participating in the trials that there would be “a more humane and peaceful world, where no one would be killed or persecuted because of his race or religion or his political beliefs, and I made those statements in my closing arguments where we had 22 defendants convicted after two days of trial. … I tried to build on that to prevent it from happening again.”

And yet, he stated, “we see it still happening today you see the pictures of people running with their infant children with hospitals being bombed and we have not yet learned the lesson from Nuremberg, despite the fact that we laid it out clear and unmistakable.”

Ferencz implored the audience to talk to young people about the dangers of war and said that society must stop “glorifying war-making.”

“We’ve got to have a change of heart and change in mind,” he said. “I work all the time … because I am trying to change the way people think about war. If people don’t think about it, their hearts won’t change … you have to ask yourself is this how human beings behave?”

Ferencz corrected the governor about his age, saying he was 103, not 102, and also said that he has three words for people to keep in mind: “Law, not war” and “Never give up.”

Born in Transylvania in 1920, Ferencz moved to the United States with his parents before his first birthday. He was raised in New York’s Hell’s Kitchen neighborhood and graduated from Harvard Law School in 1943. During World War II, he served in the U.S. Army and received five battle stars during World War II for bravery on the battlefield.

In his own book, Planethood, Ferencz recounted seeing the horrors of the Nazi concentration camps, writing, “Indelibly seared into my memory are the scenes I witnessed while liberating these centers of death and destruction. Camps like Buchenwald, Mauthausen, and Dachau are vividly imprinted in my mind’s eye. Even today, when I close my eyes, I witness a deadly vision I can never forget-the crematoria aglow with the fire of burning flesh, the mounds of emaciated corpses stacked like cordwood waiting to be burned. … I had peered into hell.”

Last November, a bipartisan group of the members of the U.S. House of Representatives introduced a bill to award a Congressional Gold Medal to Ferencz.

During the medal ceremony, which was held at Florida Atlantic University in Boca Raton, DeSantis also honored two other Holocaust survivors, Samuel Ron, 97, and Norman Frajman, 92.