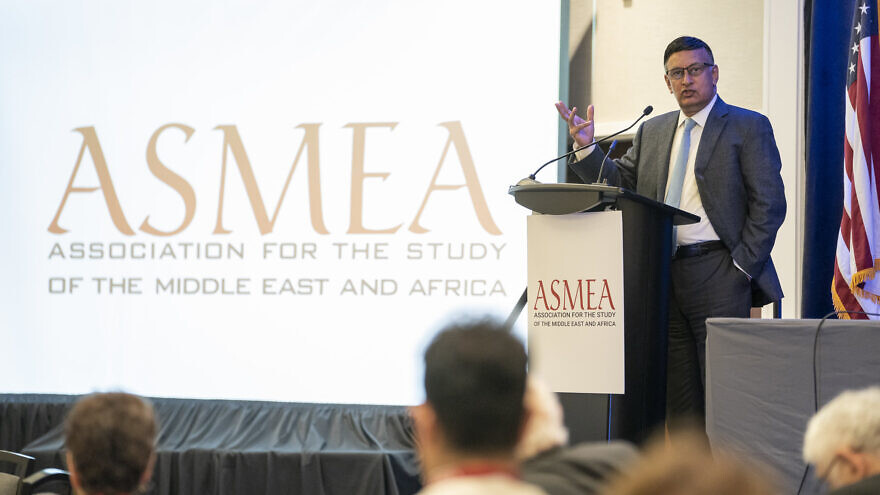 (November 24, 2021 / JNS) A former Pakistani ambassador to the U.S. has highlighted the failure of the American foreign policy community’s long-term strategic thinking compared to its adversaries.

In a speech delivered Nov. 15 to scholars at the Association for the Study of the Middle East and Africa (ASMEA) annual conference, Husain Haqqani — an academic and journalist who served as Pakistan’s U.S. envoy from 2008-2011 — highlighted the threats to America from Islamists in the Indian subcontinent.

The return of the Taliban in Afghanistan after the American withdrawal from that country puts Afghanistan’s Islamists in a leadership role among radical Islamists worldwide, as opposed to Islam’s traditional heartland in the Middle East, he explained.

“The fact that Islam, of course, is the religion that has a universal message but talks about all of humanity as being interconnected, does not mean that its roots and its center will always remain in the Middle East,” Haqqani said. “[In] the last few months, the leadership role in the Middle East is no longer in the hands of the historic major Arab entities.”

Today, Turkey is touting a new Ottoman ideology, Iran is leading a Shi’a revival and Saudi Arabia is attempting to reform itself to advocate for a more moderate Islam compared to the extreme Wahabi ideology it has maintained throughout most of the 20th century.

In Afghanistan, which is not in the Middle East but still plays an important role in Middle Eastern politics, the return of the Taliban has in short order opened the country up to become the base of terrorist organizations like Al-Qaeda and ISIS-K.

Haqqani pointed to the dangers of short-term thinking that led to failure in Afghanistan. The mistakes started in the 1980s, when America supported the Taliban against the Soviet Union.

“The Islamists had, after several years of trying different methods of acquiring power in different parts of the country, realized that they could take advantage of aligning with one of the two superpowers at the time, the United States, to try and bring down and force the hand of the other superpower, the Soviet Union,” Haqqani said. “But, while the Americans thought of this as just one part of their big strategic game against the Soviet Union, the Islamists had their own plans. And in their own books and in their own writings, many of it were not even read in Washington, D.C., by the policymakers. Their plan was to use the U.S. against the Soviet Union and then later on turn on the United States.”

Their goal, he said, was to have a base from which to spread their Islamist message.

“Islamic revivalism is the ideology of many political Islamist movements, and those who do not make a distinction between Islamism and Islam make a mistake,” he said. “Islam is the religion of more than a billion people, practiced in varying degrees and varying forms, some Muslims are more secular than others, there is no single version of any faith.”

But Haqqani, quoting the 20th-century Indian Islamist ideologue Abul A’la Al-Maududi, said Islamists’ objective was to revolutionize the intellectual outlook of humanity and instill the Islamic attitude towards life and morality so that the standards of values and behavior found in Islam become dominant.

“What these people are talking about is [Islam] is something to be enforced, and that’s why you hear the term enforcement of Islam,” he said.

If Al-Qaeda led by Osama Bin Laden was Jihad 1.0, and ISIS was Jihad 2.0, what we will now see is a global Jihad 3.0, with the U.S. having no presence in the region, he told the attendees.

The U.S., said Haqqani, did not have a 20-year plan in Afghanistan. Rather, it had 20 one-year plans, and for 16 of the 20 years of the war America was discussing how it would withdraw.

“How do you win a war when … [we’re] fighting this war so that we can withdraw someday?” he said. “Hardly a recipe for victory. Hardly the way forward.”

The new jihad, he said, is not likely to attack the U.S. on American soil again, having learned the cost of such direct military conflict after September 11 attacks. But it will oppose American interests globally and encircle American allies such as Israel, Arab allies and India.

This form of jihad can be used against the U.S. by its opponents, such as China, Haqqani believes. He said the ethnic cleansing of the Uyghur Muslims is China’s attempt to prevent the likelihood that Islamists will oppose China as it begins using Islamic countries to further its interests against the U.S., just like America did against the Soviet Union without taking the same precautions.

China has a growing influence in Muslim countries such as Pakistan, Iran and Afghanistan because Beijing is willing to provide much-needed loans, without the human rights conditions attached to borrowing from the International Monetary Fund. That, plus China’s ability to side with those countries at the United Nations, incentivizes Muslim nations to turn a blind eye to its treatment of Uyghur Muslims.

“China actually has a plan. I don’t know the whole plan, but I can see the pieces. I can understand them playing nice with Islamists while at the same time suppressing their own Muslims,” Haqqani said. “I think they’re doing it in anticipation. They intend to use the Islamists as an enemy against the United States. Rile these people up. ‘These guys are willing to be suicide bombers? Let them be. We don’t have to do the fighting.’”

As the world’s largest purchaser of oil, China also has influence over U.S. allies such as Egypt, the UAE and Saudi Arabia.

“They have used something we have not done very well, which is using economic leverage for clear political and strategic ends,” Haqqani said. “We talk big, we do a lot of things, but at the end of the day because our economy is not centralized, there is always the guy who says, ‘Yeah, but if you do that, my business is going to go down.’”