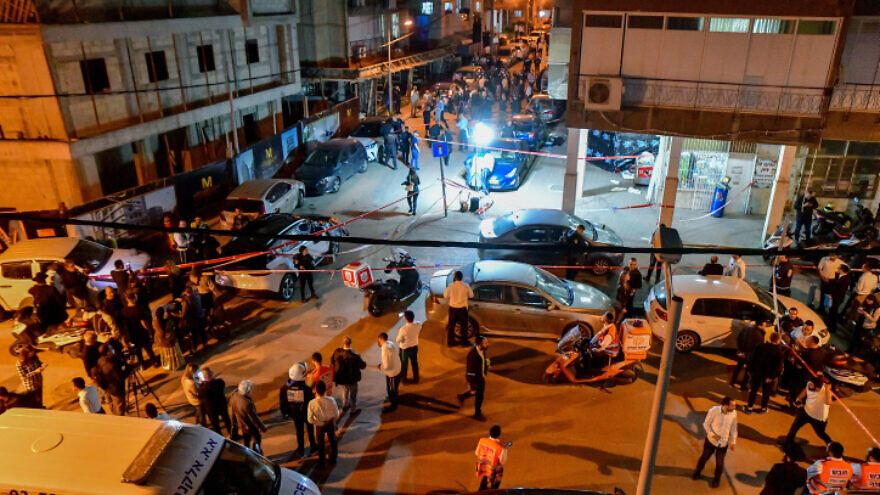 Israeli police officers and rescue forces are seen at the scene of a shooting attack in Bnei Brak on March 29, 2022. Photo by Avshalom Sassoni/Flash90
Spread the word.
Help JNS grow!
Share now:

(March 29, 2022 / JNS) Five people are dead in a terror attack that took place at about 8 p.m. in the city of Bnei Brak, confirmed Magen David Adom.

The shooter was killed by police. The terrorist was a 27-year-old resident of the village of Yabad in the West Bank who spent time in Israeli jail in the past, according to the Israel Security Agency (Shin Bet).

Officers were scouring the area, some 20 minutes by car east of Tel Aviv, to ensure that no other shooters were at large.

“I call on the city’s residents to stay in their homes for the time being and wait for clear instructions from the security forces,” Bnei Brak Mayor Avraham Rubinstein said in an interview on Israel’s Channel 12.

It appears that the terrorist first opened fire on Herzl Street at the corner of Jabotinsky in Bnei Brak, where he killed a first man who was sitting in his car, according to Israel Police. He then opened fire at a store on a second street, killing two more people. Finally, he shot another person on that street and then moved on to the nearby city of Ramat Gan to the south, where he again opened fire and seriously wounded a fifth person—this time, a police officer—before being shot dead by security forces.

The police officer was treated at Beilinson Hospital and later died of his wounds.

Magen David emergency responders were on the scene.

“I live on Hashneim Street in Bnei Brak and was at home when I heard gunshots,” said MDA EMT Menachem Englander who treated the victims of the terror attack. “I immediately went out to the street and saw a terrorist pointing a weapon at me. By a miracle, his weapon jammed, and he couldn’t shoot. I immediately went back to my house, locked my door and reported to the emergency dispatch center. Once the police arrived at the scene and cleared it, I went back downstairs.”

On Twitter, Bennett said that Israel “is facing a wave of murderous Arab terrorism.”

“My heart goes out to the families who lost their loved ones tonight, and I pray for the well-being of the wounded,” he wrote. “We will fight terror with perseverance, stubbornness and an iron fist.”

This is the third terrorist attack in one week.

Seven days ago, an Arab Israeli influenced by ISIS opened fire in the southern city of Beersheva, killing four people. This past weekend, two 19-year-old Israel Border Police officers were killed in a shooting attack in Hadera.

So far, 11 people have died in these attacks. In total, there have been 10 terrorist attacks this month.