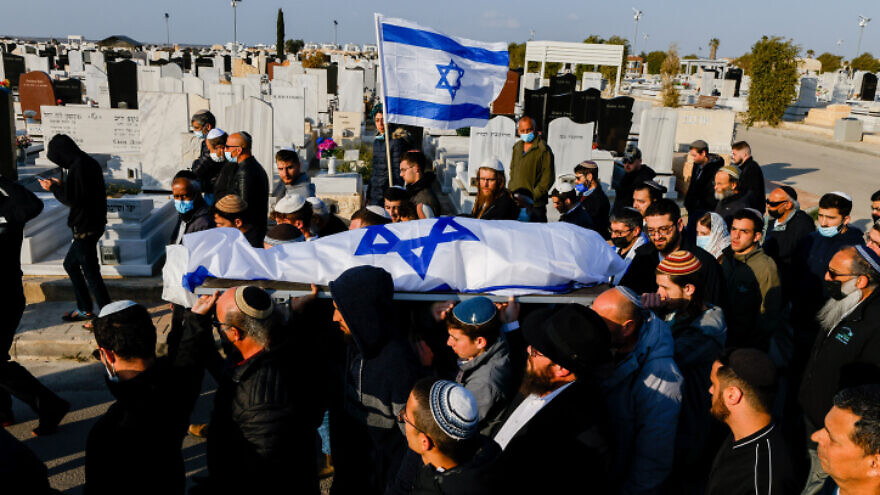 Mourners carry the body of 67-year-old Menahem Yehezkel, who was stabbed to death by a Bedouin Arab during a car-ramming attack in the southern Israeli city of Beersheva on March 22, during his funeral at a Beersheva cemetery on March 23, 2022. Photo by Olivier Fitoussi/Flash90.
Republish this article
619 WORDS
Spread the word.
Help JNS grow!
Share now:

(March 23, 2022 / Israel Hayom) Two out of four Israelis who were murdered in a car-ramming and stabbing attack in Beersheva on Tuesday were laid to rest on Wednesday afternoon.

Yahbas’s husband eulogized her, saying: “We will never forget you … you always helped everyone, and then came a Jew-hater and took you away from us. You were with us in heart and soul. We will take care of the children as you did. Love you and the children love you.”

Yahbas’s nephew, Yisrael Ozan, was a member of one of the first teams of paramedics who scrambled to the scene of the attack. “I went to treat a wounded woman who was unconscious, and while I was working I saw that she was my aunt—my mom’s sister. She was showing no signs of life, and we were forced to declare her dead. I was shocked, but I had to keep functioning,” he said on Tuesday.

Yehezkel left behind a sister and three brothers. Education Minister Yifat Shasha-Biton, who attended his funeral, said: “Menahem Yehezkel went for a walk and was stabbed by a vile killed who killed four people mercilessly and indiscriminately. Four people who went out on their daily errands and were murdered, just because they were Jews.”

He continued, saying, “Menachem’s friends and acquaintances have described him as a pleasant, cordial and loving person. The heart aches. I would like to offer my condolences to the families of the victims. … There are no words to describe the magnitude of this tragedy.”

“There is no limit to the pain you feel. … Your pain is our pain, and we are here by your side and with you. Laura … was murdered in her city. She enjoyed spending time with her husband and was proud of her family. Her daughters and family meant everything to her. Laura loved life and celebrated it until it was taken from her,” he said.

Crying at their mother’s funeral, Yitzhak’s daughters screamed: “Mom, come back to us!”

Kravitzky, a Chabad rabbi, will also be laid to rest in Beersheva. He has been described by loved ones as fully committed to his community, running a local soup kitchen for more than a decade.

According to Chabad. org, “he was the gentlest of souls whose entire life was about giving to others,” said Rabbi Sholom Duchman, director of Colel Chabad—Israel’s longest-running charity ad the organization that oversaw the soup kitchen.

The attack occurred at 4 p.m. on Tuesday. An Israeli-Arab man from the Bedouin town of Houra—later identified as Muhammad Abu Al-Kiyan, 34, a known supporter of ISIS who served jail time in Israel—stabbed Yitzhak to death at a gas station. He then got into his car and drove to a nearby shopping center, where he ran down Kravitsky, who was riding a bicycle. Then he headed toward the shops and stabbed Yahbas and Yehezkel to death. He also stabbed two more women, who remain hospitalized in critical condition.

The Israel Police has raised the level of alert nationwide out of concern of a possible escalation of violence as the Ramadan holiday approaches. This year, it coincides with the one-year anniversary of the violent riots that erupted in mixed cities during the 11-day conflict with Israel and Hamas in the Gaza Strip last May.

This article originally appeared in Israel Hayom.
Republish this article in your newspaper or website