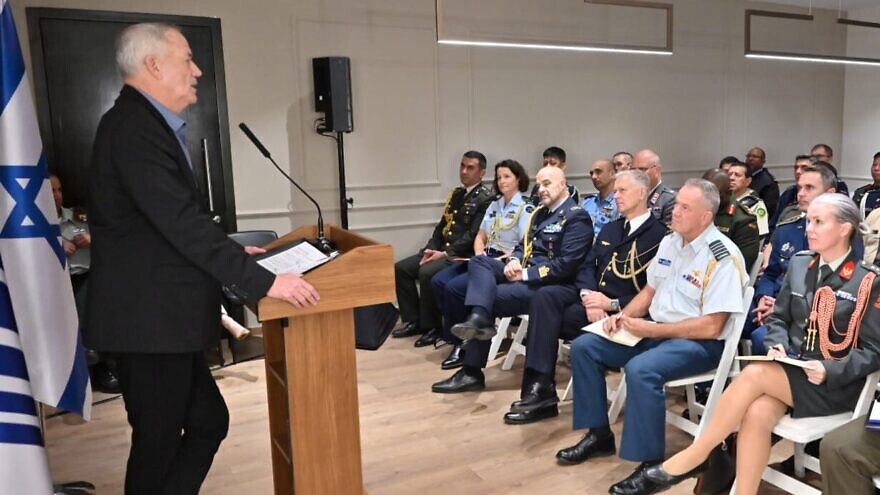 (December 2, 2022 / JNS) Israeli Defense Minister Benny Gantz on Thursday told the defense attaches of over 30 countries that Iran had conducted at least 16 attacks on civilian vessels in the region over the past five years.

“Iran is a global and regional challenge and also a threat to the State of Israel. Just this month, we saw an [Iranian] attack on a commercial vessel using a Shahed 136 [unmanned aerial vehicle], which was launched from the Chabahar region of southern Iran,” Gantz said, adding: “This is the same area I discussed one year ago with your ambassadors as a hotspot of terrorism. In fact, in the last 5 years, Iran has conducted at least 16 separate attacks on civilian international vessels in the Gulf and the Red Sea.”

Gantz was referring specifically to the Nov. 15 drone attack on the oil tanker Pacific Zircon off the coast of Oman, which U.S. Central Command later confirmed was perpetrated by Tehran.

Iran has targeted numerous ships in recent years, including, in July 2021, the Mercer Street, an oil tanker with connections to Idan Ofer’s brother, Eyal. The ship’s captain and a security officer were killed in the attack.

Gantz also noted that after the signing of the Abraham Accords, which normalized relations between Israel and several Arab countries, Israel officially moved into CENTCOM’s area of responsibility.

As a result, “there have been over 200 interactions between Israeli officials and regional partners” and in the last two years, “around 140 defense agreements and groundbreaking MOUs have been signed between Israel and partner countries,” said Gantz.

Regarding the Palestinians, Gantz said that Jerusalem had promoted dozens of confidence-building measures but, “unfortunately, despite these efforts, we are seeing a lack of [their] enforcement and face terror attacks that require action on our part. We conduct operations that target terrorism, and we will not hesitate to take the actions necessary to defend the citizens of Israel.”