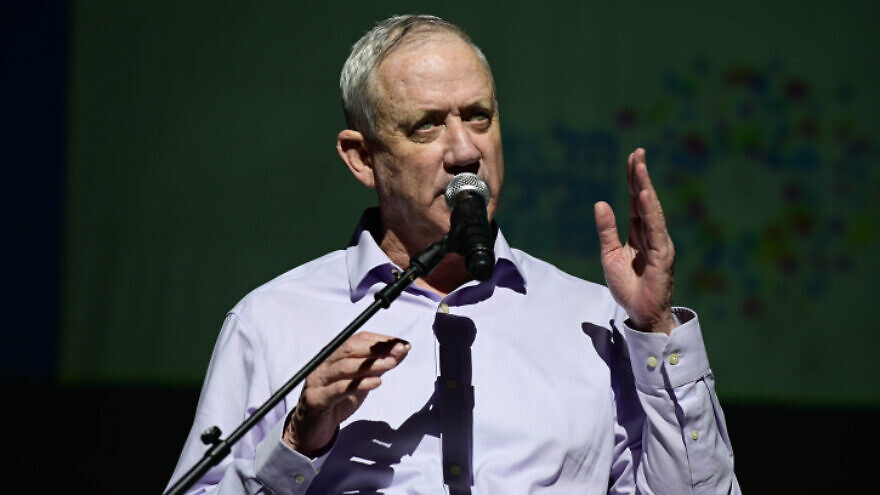 Addressing a policy forum hosted by the Washington Institute, Gantz said, “As we know, Iran is continuing its uranium enrichment and expanding its capabilities and they are close to 90% enrichment, once they decide to reach it. I understand the need for an agreement, but if an agreement [is not] reached, we must activate Plan B immediately.”

On April 6, during an address to 80 ambassadors in Israel, Gantz defined “Plan B” as “moving forward with economic pressure, intelligence, diplomatic pressure, power projection, and regional counterterrorism efforts.”

During his speech on Monday, Gantz said Israel must expand its intelligence cooperation with the United States and seek to join a regional coalition.

Such steps, he argued, “will make up for the lack of inspection in a possible agreement, since inspection should be ‘anytime, anywhere.’ I can also see the possibility for future cooperation in air defense [with Arab Gulf allies].”

Addressing the situation in Syria, Gantz said, “Israel is operating against weapons transfers and other Iranian threats. In the recent period, we are seeing more stability in Syria and I see that there is some activity between Syria and members of the Arab League. If Assad wishes to be part of the [near] region, he will have to [cut] his negative ties to Iran and the terror that emanates from Syria.”

The defense minister also addressed the recent wave of terrorism in Israel, and the deadly shooting attack by a Palestinian terrorist in Tel Aviv on Thursday, stating, “It is great that the Palestinian Authority condemned the attack, but some senior PA officials are inciting to terror.” He named the P.A.’s governor of Jenin, Akram Rajoub, who claimed that the gunman who conducted the Tel Aviv attack was “not a terrorist,” as an example.

“This hurts both Palestinians and Israelis. I demand concrete action,” said Gantz.

“This is a challenging and sensitive period. Ramadan should be a time of worship, spent with family. I believe that this is what most Palestinians and Muslim citizens of Israel believe. We intend to operate with great precision and sensitivity,” he added.

According to Gantz’s office, he described Israel’s response to the string of terrorist attacks over the past two weeks as “balancing between a conservative security policy and investing in civilian and economic ‘confidence-building measures’ such as work permits [for Palestinians to work in Israel], building permits [for Palestinians in Area C of Judea and Samaria] and more.”