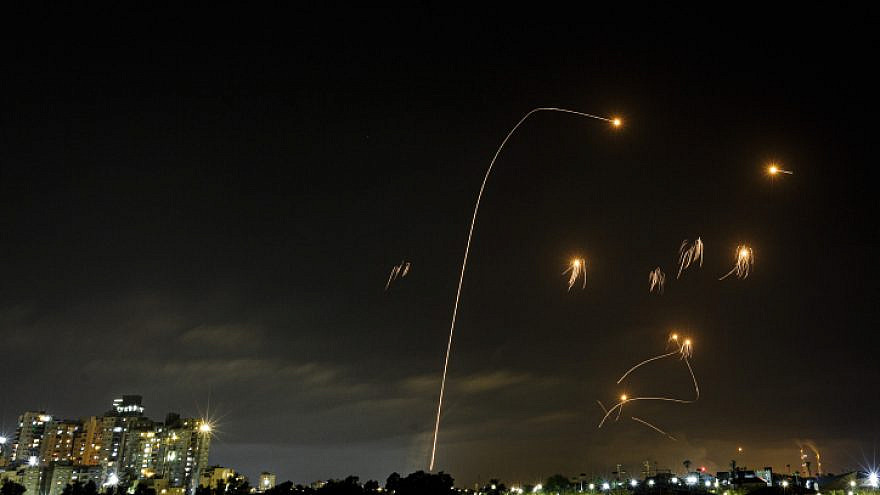 A long-exposure shot shows the Iron Dome air-defense system intercepting missiles launched from Hamas in the Gaza Strip towards Israel, as seen from the southern Israeli city of Ashkelon on May 10, 2021. Photo by Edi Israel/Flash90.
Spread the word.
Help JNS grow!
Share now:

(May 10, 2021 / JNS) Gaza terror factions launched continuous waves of projectiles at southern Israel throughout Monday night, launching more than 150 rockets at Israeli civilians. The attacks following a salvo that targeted Jerusalem earlier in the day and an anti-tank missile attack on an Israeli vehicle near Sderot, marking the start of the escalation.

“Among the targets [struck] were two rocket-launchers, two military posts and eight terror operatives belonging to the Hamas terror organization in the Gaza Strip,” the IDF said in a statement.

A Ynet report citing the Gaza Health Ministry said 20 people were killed in the Strip since the start of the escalation, nine of them children. The IDF is investigating a report that some Palestinian children were killed by a premature rocket explosion.

Magen David Adom said it has treated 10 people for injuries so far stemming from Gaza rocket fire. Most of the treatment has been for shock.

Warning sirens went off repeatedly in the city of Sderot and the surrounding area near the Gaza Strip, as well as in Ashkelon. The Iron Dome air-defense system intercepted several projectiles heading into built-up areas.

“We are in a struggle that spans a number of fronts: Jerusalem, Gaza and other places in the country,” said Israeli Prime Minister Benjamin Netanyahu, during a speech marking Jerusalem Day at Ammunition Hill in the capital.

“Terror organizations in Gaza crossed a red line this evening, on Jerusalem Day, and attacked us with missiles at the entrance to Jerusalem. Israel will respond with much force. We will not tolerate harm to our territory, capital, civilians or soldiers. Those who attack us will pay a heavy price,” he stated.

Netanyahu warned Israeli citizens that the current clash “can last for a while. We did not seek escalation, but those who chose to escalate will feel our force. I cannot share with you the situation assessment that I hold with all defense elements or all of the operations we are carrying out. This is a stubborn struggle that is derived from the wider picture. We are managing it with determination, responsibility and wisdom.”