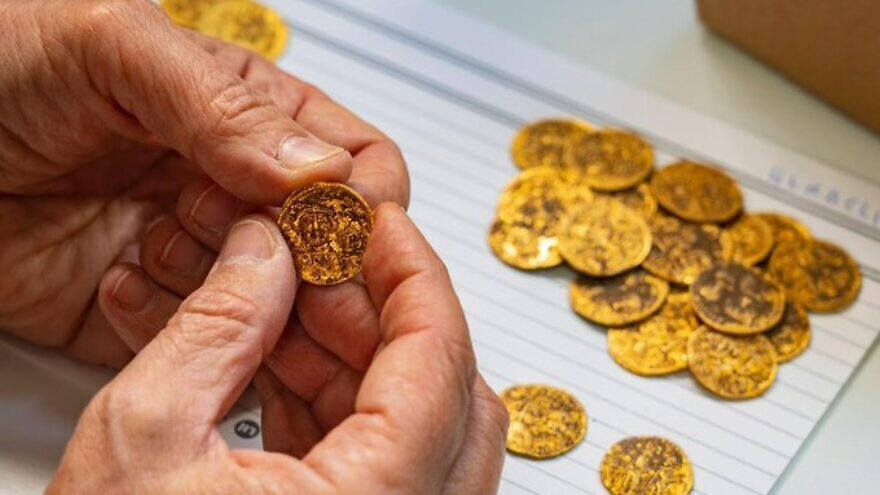 (October 3, 2022 / JNS) A hidden cache of 44 gold coins dating from the Muslim conquest of Jerusalem was recently found during an archaeological excavation at the site of the ancient city of Banias, the Israel Antiquities Authority (IAA) revealed on Monday.

Several of the coins were dated to the reigns of Emperor Phocas (602–610) and Emperor Heraclius (610-641), the latter of which overlapped with the Muslim conquest of Byzantine Palestine in 635.

“The coin hoard, weighing about 170 grams … reflects a specific moment in time, when we can imagine the owner concealing his fortune in the threat of war, hoping to return one day to retrieve his property. In retrospect, we know that he was less fortunate,” said Yoav Lerer, who directed the excavation on behalf of the IAA.

Banias, which is located within the Hermon River nature reserve, was first established by Canaanites and reached its peak in the Early Roman period, when Herod the Great and his son Philip II entirely rebuilt the city and named it Caesarea Philippi, in honor of Roman Emperor Augustus.

According to Christian tradition, Banias is where Peter the Apostle recognized Jesus as the messiah and thereafter received the keys to the kingdom of heaven, as recounted in Matthew 16:18.