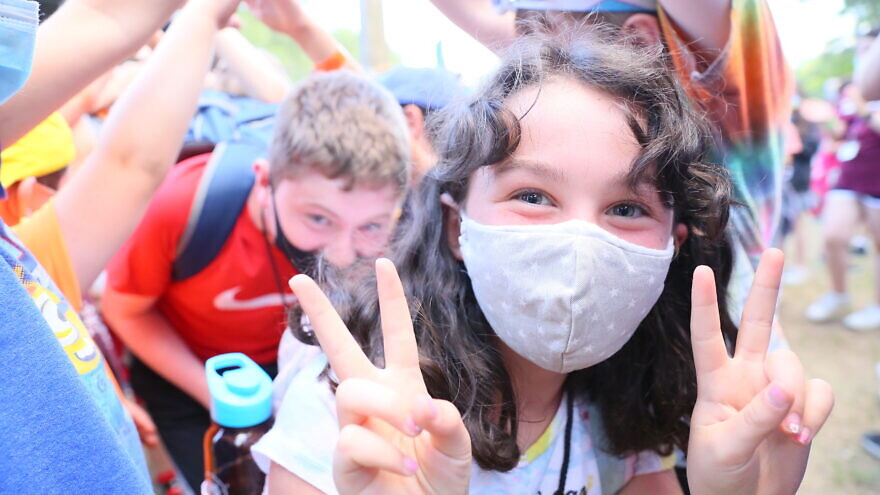 The One Happy Camper (OHC) program was piloted in 2006 to offer incentive grants up to $1,000 to campers attending Jewish overnight camp for the first time, with the goal to increase the number of young people benefiting from the transformative experience of Jewish summer camp. Credit: Courtesy.
Republish this article
867 WORDS
Spread the word.
Help JNS grow!
Share now:

(July 9, 2021 / JNS) Besides celebrating the return of summer camp this year, for Jewish communal professionals there’s an additional item to cheer: the 100,000th child attending a Jewish camp, thanks to the One Happy Camper initiative.

The program—a collaboration between the Foundation for Jewish Camp, numerous Jewish federations and Jewish communities in the United States and Canada and camp providers—offers incentive grants of up to $1,000 to families of first-time campers. The hope is that once children get a taste of Jewish overnight camp, they’ll come back the following year, and build a connection to the greater Jewish community and Jewish values and practice.

“We have such enormous pride that a concept piloted back in 2006 has just been consistently growing in interest and demand,” said Jeremy Fingerman, CEO of the Foundation for Jewish Camp, noting that 80 percent of One Happy Camper recipients return for year two and beyond. “Once they’re in Jewish camp, they are hooked.”

The first grants were awarded to campers in the Chicago area in 2006 and expanded from there. At last count, some 7,000 grants are provided annually with some 45 Jewish communities taking part in the program. In addition, 60 camps offer their own One Happy Camper grants, and PJ Library, which provides free Jewish books to children, also offers a One Happy Camper grant to its subscribers.

The incentive program has not been an inconsequential endeavor: At $1,000 per grant, One Happy Camper has meant the allocation of some $100 million in philanthropic funds to Jewish camps. “That’s pretty incredible,” said Fingerman.

Jewish communal professionals say the financial investment is worth it. Not only does it provide an influx of funding to camps, study after study has shown that children who attend a Jewish camp are more likely to connect to traditions and values, and remain connected to Judaism and the friends they make during their childhood.

“One Happy Camper is an onramp to camp and gives parents an easy way to help their kids try Jewish camp for the first time,” said Wendy Verba, community impact managing director for the San Francisco-based Jewish Community Federation and Endowment Fund.

At the same time, she added that “it has helped grow our whole camp ecosystem in Northern California. We’ve doubled the number of camps in the last six years or so,” thanks to the Foundation for Jewish Camp and various donors.

Verba said her federation has been giving out the grants since 2013 to the tune of some 1,500 grants in total. This year she anticipates giving out around 325. She noted that the demand was so high this year that they ran out of funds initially and had to raise more to cover all the One Happy Camper participants this year.

“We know that One Happy Camper participants return to their camp for a second summer at a high rate. Plus, here in the Bay Area, we are reaching a high percentage of unaffiliated and interfaith families and those are folks we want to have the inclusive Jewish camp experiences,” she said.

‘Where they discover who they are’

Rabbi Joel Seltzer, executive director of Camp Ramah in the Poconos and Camp Ramah Day Camp in Philadelphia, said that when he first arrived at the camp, it was under-enrolled in part due to the economic downturn of 2008.

One Happy Camper was just getting off the ground at that time, and the Jewish Federation of Greater Philadelphia, he said, hopped on board. With an added $1,000, they were able to convince families to give the camp a try.

However, encouraging families to choose Jewish camp isn’t simply about affordability, said Seltzer. It’s about encouraging community. He explained that many Jewish families who are synagogue members send their children to Hebrew school during the school year, but when it comes to the summer, they send them to a non-Jewish private camp.

“From a pure marketing strategy, it is good business to bring them in with a coupon,” he said.

Plus, he added, the funds are a huge help for camps, allow local Jewish federations to feel good about helping local families, and allow rabbis and synagogues to give their congregants a push towards the experience because of the grant.

Liora Bernstein, who received a One Happy Camper grant in 2010 to attend Camp Eisner, has transformed her love of Jewish camp into a career.

“Camp is such a magical place … it’s where they discover who they are meant to be in life, and I just think people say that camp gave them so much,” said Bernstein, who serves as the leadership development fellow at the Foundation for Jewish Camp. “The more good people and good talent we have in the field, the more we can continue to grow kids who will help run the world some day.”

At Eisner, a Union for Reform Judaism camp, she said, “Judaism is integral and engrained in everything we do. We have a camp mission, we have Jewish prayer and learning every day, and celebrate Shabbat each week. It takes time, but as you get older, you see what camp does for you in terms of your Jewish identity.”