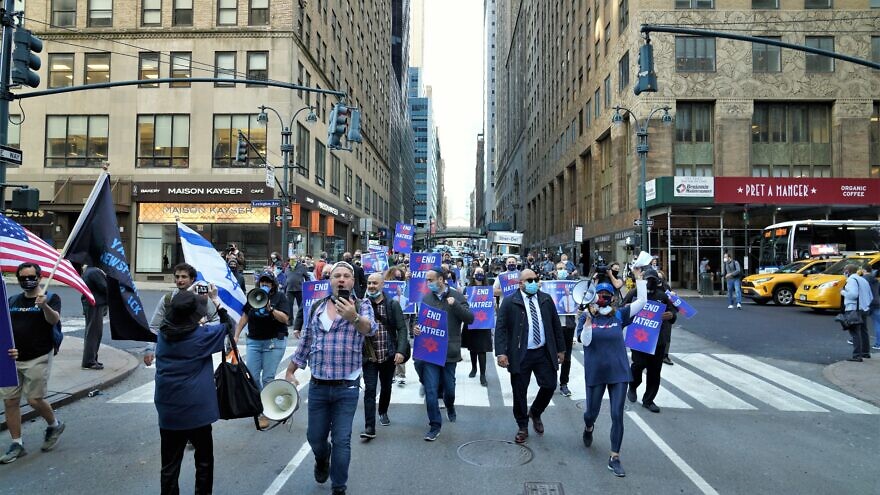 (October 19, 2020 / JNS) Supporters of a grassroots group seeking to end anti-Semitism held a rally outside of the New York Public Library last Thursday to express their dismay with recent comments and actions by New York Gov. Andrew Cuomo and New York City Mayor Bill de Blasio that have been perceived as targeting the Jewish community.

“Governor Cuomo and Mayor de Blasio’s continued attacks against the Jewish community are outrageous. Never in my life did I think I would see this type of blatant Jew-hatred from our public officials,” said Brooke Goldstein, executive director of The Lawfare Project and supporter of End Jew Hatred, a grassroots anti-Semitism movement. “Singling out New York Jews for blame in the coronavirus spread is unconscionable and discriminatory. Statements like these are exactly why we are marching today.”

Several dozen protestors appeared to turn out for the rally on Thursday, which started at the Public Library and ended at Cuomo’s office, where they attempted to deliver a letter to the governor to enforce COVID regulations more equally and apologize to the Jewish community.

Jewish leaders and groups, specifically the ultra-Orthodox community, have sharply criticized the two leaders for their enforcement of coronavirus restrictions amid a spike in cases. In recent weeks, Cuomo has ordered limits on worship within so-called “red zones” or areas with a cluster of new infections.

Over the weekend, he announced that he ordered the ban of a Jewish wedding that was set to take place in the Brooklyn neighborhood of Williamsburg that was reportedly expected to draw up to 10,000 people. The wedding, which had been scheduled for Monday, was for the grandchild of Satmar Grand Rabbi Zalman Leib Teitlebaum.

“You can get married; you just can’t have 1,000 people at your wedding. You get the same result at the end of the day,” said the governor.

Several New York Orthodox Jewish leaders have filed a federal lawsuit against Cuomo, claiming that his restrictions are violating their religious and civil liberties.