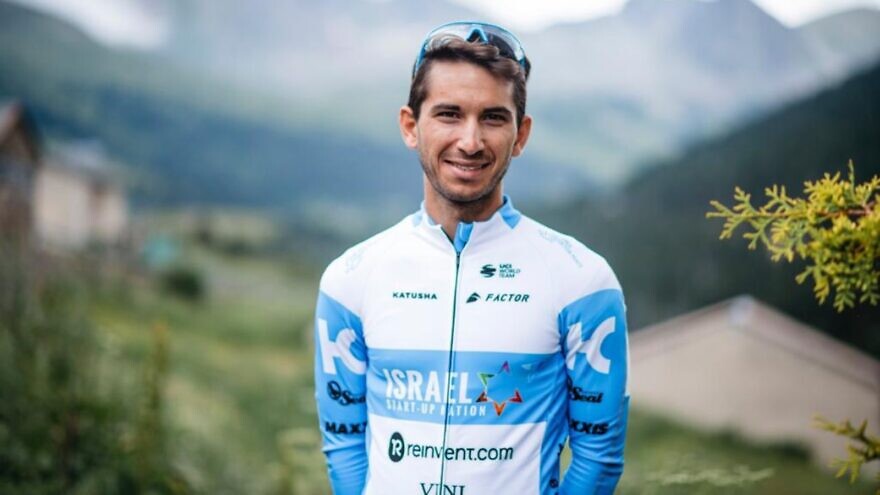 (September 21, 2020 / JNS) Israeli cyclist Guy Niv made history on Sunday, becoming the first-ever Israeli cyclist to complete the Tour de France. He was riding as part of the Team Israel Start-Up Nation squad, which was competing in the Tour for the first time.

Completing the biggest professional cycling race of all represents a remarkable accomplishment for the 26-year-old who, until three years ago, was primarily a mountain biker and had little experience in road racing.

“I felt shivers when I crossed the finish line on the Champs-Elysées,” said Niv. “It was a sense of vast relief and sheer happiness: I have done it for the next generation of young Israeli cyclists. They can now dream of achieving this and more.”

He was visibly emotional as he finished the race, acknowledging that it was far from a “walk in the park,” saying “I had to dig deep inside at times.”

In general, he surprised both his team with the relative ease with which he was able to handle his first Tour de France. “Guy impressed us all,” said the team’s sports director Eric Van Lancker. “He knew that the whole country—Israel—was looking up to him, and he dealt with that pressure admirably. We are proud of him.”

Team owner Sylvan Adams added that Niv faced “the country’s and the team’s expectations, and never blundered. As a team, we were in the game in almost every stage, and although we did not get the coveted stage win, ISN finished with seven ‘top 10’s, and we were part of many breakaways. I can promise you that we will be back next year with a strengthened team, which will be led by the greatest cyclist of the generation: Chris Froome. We are just getting started.”

Niv’s accomplishment has been covered widely in the Israeli media, making him one of the country’s most celebrated athletes in a sport that’s usually eclipsed by football and basketball.

“I dreamed about racing in the Tour as a kid,” recounted Niv. “I even witnessed it as a spectator on the side of the road. Now, I hope that this dream will be shared by many Israeli kids who will follow my footsteps and surpass me.”