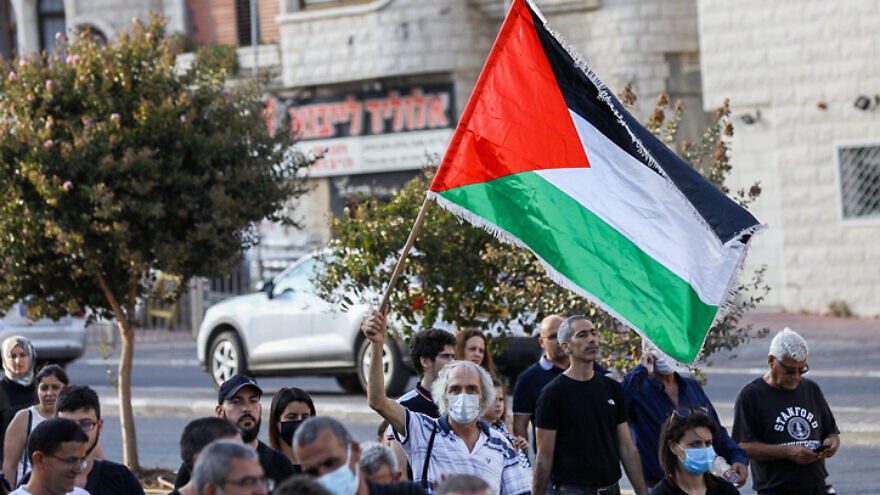 A protest in Sakhnin marking the 21st anniversary of the October 2000 riots, in which 13 Arab Israelis were killed in clashes with police, Oct. 2, 2021. Photo by Alon Nadav/Flash90.
Spread the word.
Help JNS grow!
Share now:

(February 7, 2022 / Israel Hayom) Hamas has been recruiting Arab citizens of Israel who have one parent who was born in Gaza or Judea and Samaria for the purpose of terrorist attacks and intelligence-gathering, according to an internal Shin Bet document presented to the government.

The information in question pertains to terrorist activities perpetrated within the Green Line between the years 2020-21, up until “Operation Guardian of the Walls” in May. These activities included actual terrorist attacks or intelligence-gathering operations on behalf of Hamas, sometimes while the Israeli military was fighting the terrorist group in Gaza.

In some of the cases, Hamas tried recruiting these individuals while they were visiting relatives in Gaza, exploiting their conflicting loyalties and Israel’s “family reunification” policies.

Hamas also asked these individuals to report on the location of rocket strikes inside Israel, according to the Shin Bet.

The Israeli citizens recruited by Hamas resided, among other places, in Rehovot, Lod and in the many Bedouin communities in the Negev. One of Shin Bet’s conclusions is that individuals who are second-generation citizens of family reunification are willing to forego the advantages that come with living in Israel compared to life in Gaza.

The Shin Bet found that the second-generation citizens often experience conflicting loyalties, torn between being Israeli and their families in Gaza. This complexity also causes some of them to work on behalf of Hamas, more so than Arabs who have two parents with Israeli citizenship.

Some two weeks ago, as a reminder, Shin Bet chief Ronen Bar noted that the descendants of family reunification were disproportionately involved in the riots in the Negev around a month ago.

Meanwhile, some six months after the government failed to pass the so-called “citizenship law,” the Knesset is expected to do so on Monday. The law would replace a temporary order regulating the status and residency of Palestinian spouses of Arab Israelis, in a first hearing.

For the legislation to pass, however, Interior Minister Ayelet Shaked will have to rely on a rare agreement with the opposition. In light of staunch opposition to the legislation from the Ra’am and Meretz parties, which are part of the coalition, Shaked has vowed to pass the law despite their objections.