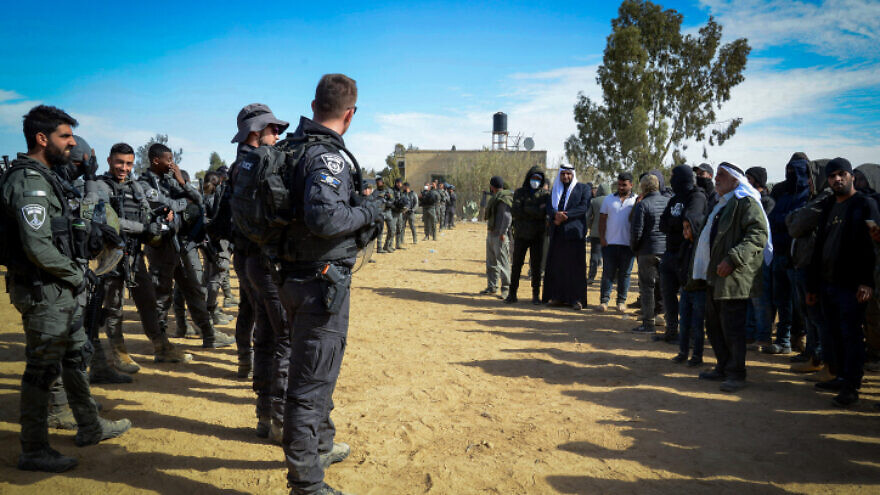 Israeli Police stand guard during a protest against tree-planting by the Jewish National Fund-Keren Kayamet LeIsrael outside the Bedouin village of al-Atrash in the Negev Desert on Jan. 12, 2022. Photo by Flash90.
Republish this article
1204 WORDS
Spread the word.
Help JNS grow!
Share now:

(January 13, 2022 / JNS) Bedouin rioters tore up newly-planted saplings on Thursday even as Israel’s government signaled that it may engage in negotiations on land ownership in the Negev Desert and even after the government had reached a temporary compromise with Bedouin leaders on Wednesday.

Bedouin citizens living in illegal encampments in the Negev have resorted to violence after Keren Kayemet LeIsrael (JNF-KKL) began planting trees Tuesday on state land, which the al-Atrash clan perceives as theirs.

Millions of Israelis are now furious over the government’s caving to the rioting and its alleged plan to recognize these illegal Bedouin encampments situated on state lands, claiming that such capitulation will only lead to further unrest and violence.

Mordechai Kedar, a senior research associate at the Begin-Sadat Center for Strategic Studies, warned that the Bedouin have far more sinister goals than obtaining legal recognition of land ownership. According to Kedar, the Bedouin see weakness in the current coalition government—and even in the last Israeli administration—and, encouraged by the newly-empowered Islamist Arab Ra’am political party, have taken their battle to the next level.

“They want to destroy the state,” he said.

“Once they smell weakness, they become emboldened,” said Kedar, adding that he believes the government is now making a mistake by appeasing them.

Kedar said the Bedouin issue is a long-term problem. Over the years, the nomadic Bedouin have been offered housing in seven specially-built towns equipped with infrastructure such as electricity and running water.

Diaspora Affairs Minister Nachman Shai said in a radio interview on Thursday, “I am not naive, but I went into their localities and saw the poverty; it is a disgrace to the State of Israel that children live in such conditions. … The intention is to reach a situation where the Bedouin will move to defined areas where they will be able to live.”

Still, many Bedouin have said they have no desire to live where Israel wants them to—not for lack of better housing and infrastructure, but because they purposely want to live the Bedouin way of life and have unfettered access to large tracts of land.

“For them, the state is the enemy because they want to live according to their own laws and norms and not those of the state,” said Kedar.

One of those laws concerns how land ownership is determined. How the Bedouin and the state view this issue is totally different. The state requires land to be registered officially. The Bedouin require control of the land to determine who owns it. For this reason, Israeli courts have dismissed most Bedouin claims to land ownership because they weren’t able to produce official documentation proving ownership.

“You can’t juggle the state norms and the Israeli norms,” Kedar insisted, referring to the Bedouin. “The State of Israel should say, ‘If you want to live as Bedouin and take over huge tracts of land, go to Saudi Arabia or Jordan, where there is plenty of land. If you want to live here, you have to accept the laws of the state.’ ”

Kedar suggested that Israel should demonstrate its sovereign rule by sending in tractors and destroying everything the Bedouin built in the Negev illegally. “Israel should also threaten to take away financial benefits the Bedouin currently receive unless they fall in line with Israeli law,” he said.

‘We are reaching a point of no return’

The highly controversial Bedouin issue, which now has the country on edge and threatens the stability of the government coalition, comes after the government recently passed the electricity law, which enables the state to connect tens of thousands of illegally built Arab homes to the national grid.

Detractors fear that the law will further enable illegal Arab building on vast swaths of land and contribute to the culture of lawlessness that has become so widespread, especially in Bedouin communities in Israel’s south.

The Bedouin issue follows a growing list of concessions the current government has made to Arabs, while ignoring right-wing interests.

For example, in addition to the above, last year the Ra’am Party achieved a budget of more than $16 billion for Arab municipalities. The Citizenship Law, which aimed to bar Palestinian spouses from receiving residency in Israel over security concerns, has failed to pass, and the Supreme Court recently instructed Interior Minister Ayelet Shaked to cease enforcing the law altogether.

This pattern of concessions is what has the Israeli right up in arms and leaders, including Judea and Samaria council heads, have called on their constituents to turn out for a mass rally outside the prime minister’s office in Jerusalem on Thursday night that drew thousands of protesters.

“We are reaching a point of no return,” the council heads said in a joint statement.

According to Kedar, the success of Ra’am in representing Arab interests in the Knesset has given the Bedouin hope that they will become the owners of all lands they took over illegally.

‘Take care of the youth’

Michael Milstein, head of the Palestinian Studies Forum at the Moshe Dayan Center at Tel Aviv University, told JNS that he believes the current conflict is about “land and sovereignty.”

“There are many lands all over the Negev the Bedouin claim they owned before 1948” and the establishment of Israel, he said. “In addition, there are problems of serious poverty among the Bedouin, growing rates of violence and accusations of discrimination.”

Milstein said he doesn’t think there is a culture of violence within the Bedouin community. Rather, he believes a problem derives from “the huge number of young Bedouin with no work who don’t learn, double alienation towards the state and their parents, and a long lack of investment and enforcement of sovereignty.”

The solution, according to Milstein, is “a civil one,” and the state should “take care of the youth.”

Adding to the public fury over the government’s decision making, Israeli Foreign Minister Yair Lapid seemed to cave to the Bedouin violence when he called on Wednesday to halt the planting and reassess the situation, while Internal Security Minister Omer Bar-Lev suggested that even though Israel is in the right, “sometimes, it’s not enough to be right. You have to be smart, and this was a place to exercise wisdom.”

Bar-Lev also faced fierce criticism in December after he told a Biden administration official that Israel would deal with “settler violence.”

It is unclear if Bar-Lev views Bedouin violence with the same severity and concern.

The Regavim movement demanded that the Israel Defense Forces and the Border Police take immediate action to secure the safety of the citizens of the Negev.

Meir Deutsch, director general of Regavim, said: “The nightmare scenarios of the past two days in the Negev are a direct result of the government’s capitulation in the forestation project. As we predicted, caving in to violence and to the Ra’am Party’s blackmail will inevitably lead to increased violence.”