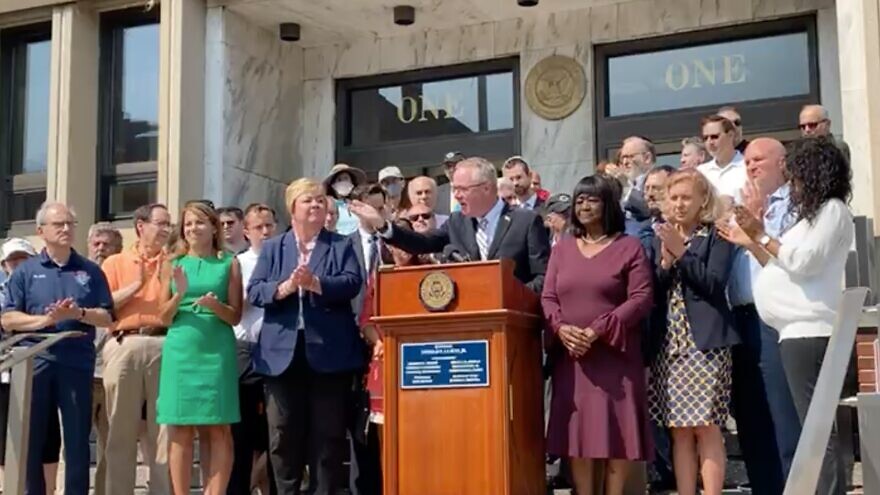 Officials from Hempstead, N.Y., hold a press conference declaring that it will sever ties with Ben & Jerry's and its parent company, Unilever, after announcing that it will no longer sell products in “occupied Palestinian territory,” July 22, 2021. Source: Screenshot.
Spread the word.
Help JNS grow!
Share now:

(July 22, 2021 / JNS) Three days after Ben & Jerry’s said it will no longer sell its products in what the company called “occupied Palestinian territory,” the Town of Hempstead on Long Island, N.Y., announced on Thursday that it will no longer be doing business with the ice-cream maker and its parent company, Unilever, effective immediately.

In making the declaration, Hempstead is believed to be the first municipality to take action based on an anti-BDS governmental statute.

According to Town Superintendent Donald Clavin, Ben & Jerry’s statement “showcases the company’s anti-Israeli stance” and is supported by the “BDS movement—a movement I consider anti-Semitic.”

A 142-square-mile township, Hempstead is home to some 770,000 residents—more residents than those living in the states of Alaska, Wyoming and the ice-cream company’s home base of Vermont—with a large Jewish community, much of it centered in and around Lawrence, Cedarhurst and Woodmere, N.Y.

Several kosher supermarkets in the area have already removed Ben & Jerry’s products from their store shelves.

In extending the ban to include Unilever—whose products include Hellman’s mayonnaise, Dove soaps and shampoo, and Lipton tea—Clavin stated, “I don’t want to hear the corporate heads say, ‘Oh, it’s not us,’ it is you. You are allowing this to take place, and if you are going to allow this anti-Israeli sentiment to take place, you can’t hide.”

“You are going to be held responsible,” he continued. “We are going to stop doing business with you and …. we are urging everyone else to follow our lead.”

Hempstead Town Councilman Bruce Blakeman suggested that proving the company’s move was anti-Semitic was as easy as asking what other territories the company is boycotting for human-rights abuses.

“Did they say anything about Cuba? Do they talk about oppression in Cuba? How about Venezuela? China, Russia, Yemen or North Korea? No, they single out Israel,” he said. “Why? Because it’s a Jewish state … we should not tolerate that anti-Semitism.”

That was echoed by fellow council member Anthony D’Esposito, who said “BDS seeks to destroy Israel, and it will not be tolerated here in America’s largest town. Today is the day we are sending a message far and wide, that this township … stands with Israel, and we will not tolerate hate any further.”