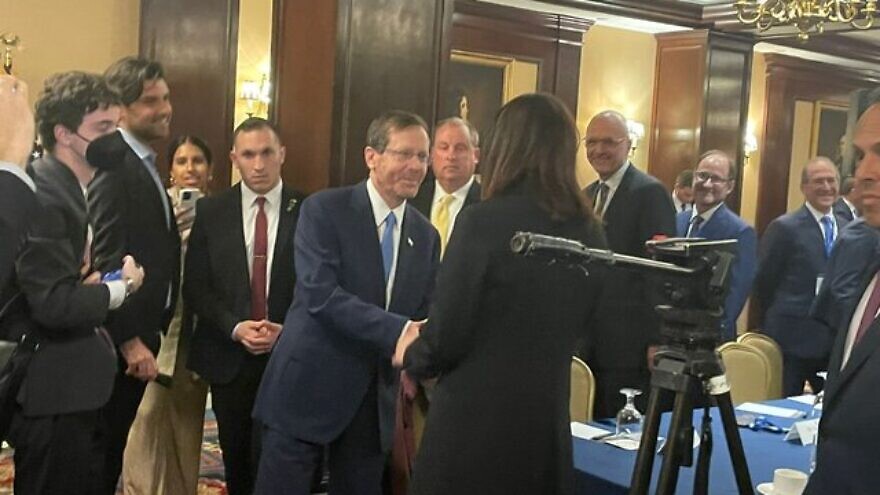 (October 26, 2022 / JNS) Israeli President Isaac Herzog greeted a largely admiring crowd of dozens of American Jewish leaders in a Washington hotel conference room on Tuesday. In a period of intense political divisions, with elections looming in the United States and Israel, Herzog’s brother, Israeli Ambassador to the U.S. Michael Herzog, asked those in attendance to try to keep politics out of the discussion.

The Israeli president, however, was more realistic, telling the crowd that none of them could completely ignore the current reality.

“You have elections and midterms, we have elections in Israel next week. I think one thing should transcend both—the friendship and close bond between Israel and the United States is unbreakable and it is a value that we must all cherish and work for. May I also add we must respect each other’s democracies,” President Herzog said.

“There will be, of course, discussions about the outcome,” he noted of the elections. “First and foremost, the underlying rule should be ‘we honor and respect democracy.’ ”

Mark Wilf, chair of the Jewish Agency for Israel, told JNS that the American Jewish leaders hewed to the president’s request, with the discussion centering around traditional issues.

“A lot of aspects of Israel-Diaspora relations were talked about. A lot of geopolitical issues too. But most importantly, a lot of praise and compliments about President Herzog and the great work he’s doing in his position,” said Wilf.

Eric Goldstein, CEO of the UJA-Federation of New York, told JNS that Herzog, due to his long experience in government and as the former head of the Jewish Agency, as well as his family’s history of leadership, is uniquely suited to lead the discussion with American Jewry during such a divisive period.

He added that he spoke to Herzog about “the importance of unity across differences, recognizing we’re going to disagree about many things, but should agree on the fundamental core value of the importance of the State of Israel.”

Goldstein said there was little talk of elections, other than to note Israel’s unstable political situation. The counter to that, he said, is that despite a period of great political uncertainty in Washington as well, the entire spectrum of American Jewry agreed to sit down together.

“The president’s focus was really on the importance of maintaining the relationship and getting people who don’t agree about a lot at this very diverse table. And there was a comment that it would be much less common to see this kind of table in Israel,” Goldstein recounted.

“There are things that unite everybody. Anti-Semitism is one of them, along with the need for an American Jewish community in support of Zionism and Israel. There are common things like that,” said Block. “The fact that all of us were there with each other showed a recognition of the wide appreciation for the central role that Israel plays in American Jewish life.”