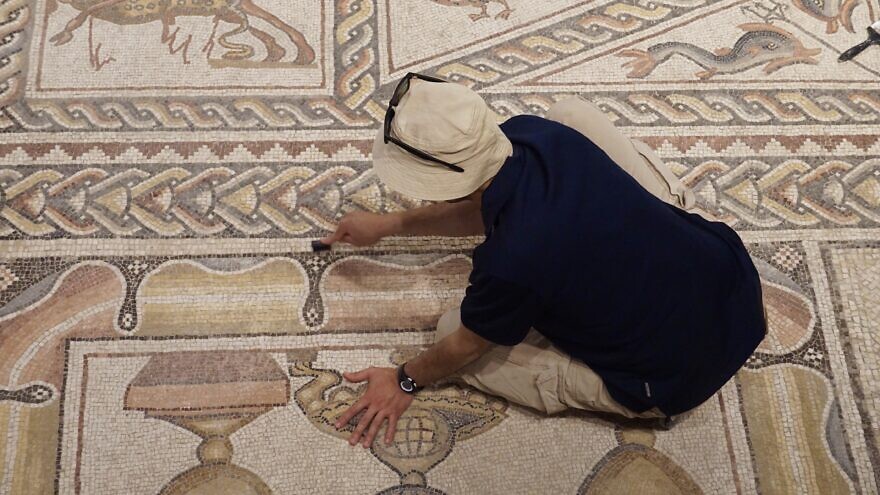 (June 28, 2022 / JNS) A little more than a year ago, Arab rioters smashed the glass façade of the Shelby White and Leon Levy Lod Mosaic Archaeological Center during the violence that engulfed Israel’s mixed Arab-Jewish cities because of the 2021 Gaza War.

On Tuesday, kids from both Arab and Jewish kindergartens waved Israeli flags to welcome Shelby White and other dignitaries, and a youth music ensemble of Arabs and Jews played interludes of traditional Arabic music, at the official dedication of the center, located in a Jewish residential neighborhood of Lod.

The center houses a magnificent 1,700-year-old mosaic that was uncovered during roadworks at the Lod site in 1996, and has been viewed by millions at some of the most prestigious museums in the world, including the Metropolitan Museum in New York, the Louvre in Paris, the Hermitage Museum in St. Petersburg and the Cini Gallery in Venice, Italy.

On Tuesday, Israel Antiquities Authority workers were still brushing and touching up pieces of the well preserved Roman-era mosaic as guests arrived to welcome it home.

The Center will open to the public later this summer, with free entrance for Lod residents. Along with viewing the mosaic, visitors can work on a mosaic of their own and take part in a multimedia quiz.

Dr. Amir Gorzalczany, director of the excavation for the Israel Antiquities Authority, told JNS that the largest mosaic, measuring 57 feet long and 30 feet wide, was part of the interior of a mansion “that clearly belonged to a very, very wealthy person.” It was discovered about three feet underground, which accounts for its well-preserved state.

Gorzalczany pointed out that the colorful surfaces, that depict fruits, mammals, birds, fish, flora and sailing vessels, reflect North African influence. A smaller mosaic was uncovered (and is also on display), which Gorzalczany explained depicts symbols associated with western design, generally found in ancient churches in western Europe and England. “The Romans had a huge empire that included North Africa and Europe,” he said.

Researchers have not determined whether the people living in the mansions were pagan, Christian or Jewish.

During later excavations in 2014 and 2018, an adjacent mosaic floor was found, which Gorzalczany says belonged to a stately reception room surrounded by pillars.

The Roman era may well have been the heyday of wealth for Lod, or Lydda as it was known. Since the founding of the State of Israel, however, the city has suffered from poverty and an often uneasy mix of Jewish and Arab residents.

It was due to a lack of funds that plans to preserve and develop the mosaic site for display were put on hold in the late 1990s and the mosaic was re-covered.

In 2008 Shelby White and the Leon Levy Foundation donated funds and partnered with the IAA and the city of Lod to create the new interactive center, as well as to preserve and display the mosaics in their original home. 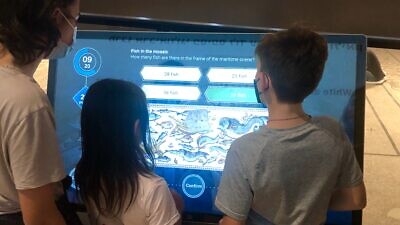 White, 84, is a prominent New York-based philanthropist and art collector. Together with her late husband, Leon Levy, White has been a longtime supporter of archaeological projects all over the world, and is president of the American Friends of the Israel Antiquities Authority.

White’s son-in-law, Lakshman Achuthan, told JNS that along with her passion for archaeology, White loves stories, and “some of the best stories are the ancient ones.” “The mosaics have images of stories,” he noted. For White, the traveling mosaic, that reached so many viewers all over the world, was a way to increase awareness and unite people, said Achuthan.

White told the crowd, “From the moment Leon and I saw this historic mosaic, we knew how important it was for the town of Lod and the world, and what it would do to make Lod a cultural center. I am thrilled to have the opportunity to be part of the restoration of the mosaic and the creation of this museum.”

“To think that this was made almost two thousand years ago! I can only imagine what the men who created it would think if they knew how many places it’s gone to around the world,” she added.

Lod Mayor Yair Revivo told those attending that the opening of the Mosaic Center “will help us expose our glorious past,” adding, “Our town is a big mosaic of cultures.”