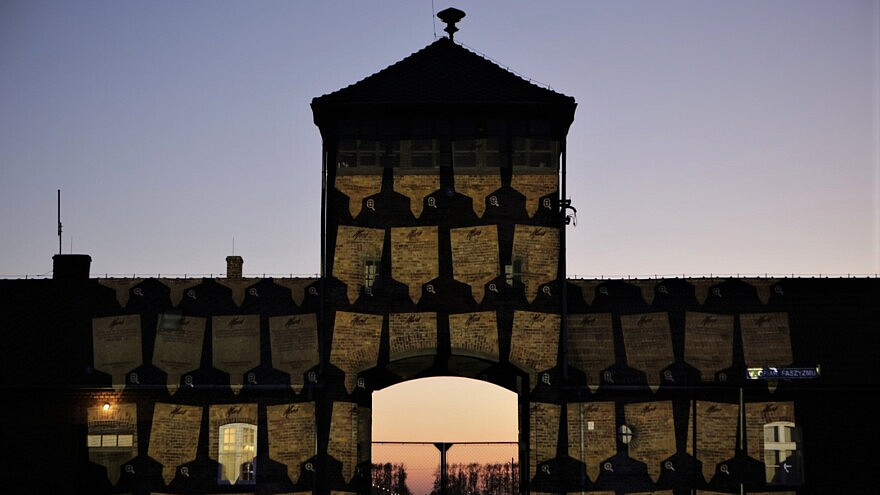 (September 6, 2022 / JNS) In a post on the platform Gab, Jon Minadeo II, from Petaluma, Calif., wrote, “Got handcuffed and arrested in Poland today for (((hate speech))) regarding Aushwitz (sic),” reported Newsweek on Tuesday.

He added, “Just got released tonight with a fine and my computer was temporarily confiscated. Life’s good. You can’t keep me down, Jews.”

On Aug. 28, Minadeo shared a photo on Gab of him and another individual standing in front of the Auschwitz-Birkenau entrance holding anti-Semitic signs.

Mindadeo’s poster said, “Greenblatt suck 6 million d**ks,” a reference to ADL CEO and national director Jonathan Greenblatt and the 6 million Jews who were killed in the Holocaust. The sign held by the other individual read: “Shoah the ADL.”

In the photo’s caption, Minadeo claimed that he was “exposing the Jewish anti white (sic) propaganda that for decades has conditioned our people to be slaves for the Jews & allow these JEW RATS to genocide us.”

He then accused the ADL of being an “anti white (sic) terrorist organization” and said that the Holocaust is a “f***ing hoax.”

Poland’s Constitution bans “those whose programs or activities sanction racial or national hatred,” as well as political parties and other groups that are based on ideologies such as Nazism, fascism and communism.