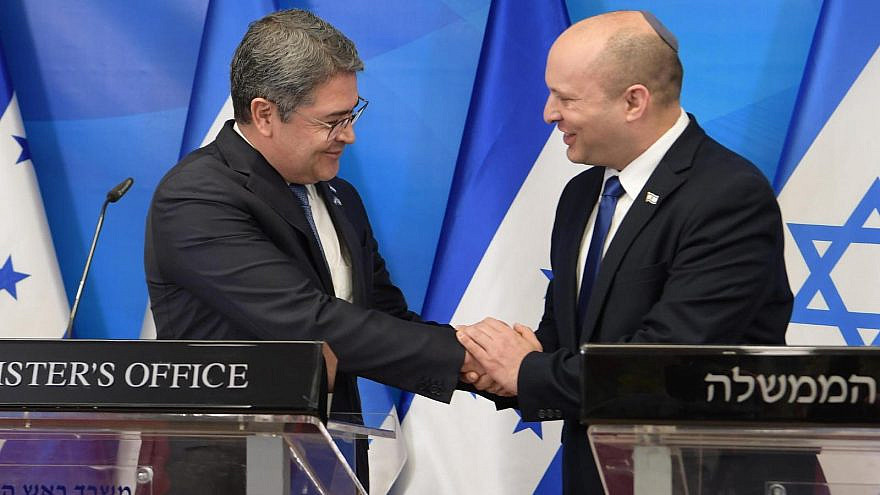 (June 24, 2021 / JNS) Honduras dedicated its new embassy in Jerusalem on Thursday, becoming the fourth country to open an embassy in Israel’s capital, following the United States, Kosovo and Guatemala.

Honduran President Juan Orlando Hernández, who flew to Israel on Wednesday to participate in the event, met with Israeli Prime Minister Naftali Bennett in Jerusalem prior to the dedication ceremony.

Following the private meeting, the two leaders held a working meeting with Foreign Minister Yair Lapid, Honduran Secretary of State for Foreign Relations and International Cooperation Lisandro Rosales Banegas, the Honduran minister of the presidency and the head of the Honduran tax authority.

The foreign ministers signed a bilateral Memorandum of Understanding (MOU) regarding plans and projects in agriculture, water resource management, health and information-sharing on developing innovation.

“Your arrival to dedicate the Honduran Embassy in Jerusalem, the reopening of the Israeli Embassy in Tegucigalpa and the cooperation agreement that we have just signed, are an additional indicator of the abiding friendship and deep link between the Jewish state, the State of Israel, and the people and nation of Honduras, under your leadership,” said Bennett in a statement.

“The Jewish people have a long memory and you will be inscribed on the pages of history as one who took a courageous and correct action for the State of Israel,” he added.

The embassy dedication follows a process that began on Jan. 1, 2019, following a trilateral meeting between the United States, Israel and Honduras, when the countries agreed to “advance the process” of opening embassies in both Tegucigalpa and Jerusalem.​​

Hernández is known for his friendly relations with Israel. According to Israel’s Foreign Ministry, under his leadership, Honduras has been one of the five countries in the world to most often abstain from U.N. resolutions opposed by Israel.

Hernández is the first graduate of Israel’s MASHAV leadership program to become head of a national government. MASHAV is the Hebrew acronym for Israel’s Agency for International Development Cooperation, founded in 1957 to share Israel’s “know-how and technologies” with the developing world, according to its website.