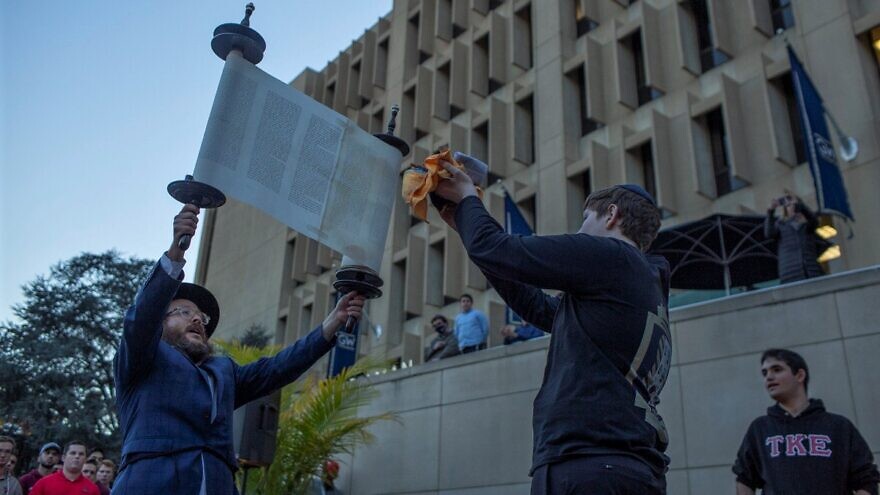 Rabbi Yudi Steiner, director of the Rohr Chabad at GW, holds up a Torah at a campus rally against anti-Semitism on Nov. 2, 2021. Credit: @phebegphoto/The Rohr Chabad at GW.
Republish this article
611 WORDS
Spread the word.
Help JNS grow!
Share now:

(November 2, 2021 / JNS) Chanting “Am Yisrael Chai”—the Jewish people live—hundreds of students at George Washington University marched from the building that houses the Tau Kappa Epsilon fraternity to the center of campus to stand against anti-Semitism.

The “Torah Procession and Solidarity Rally” was a response to the desecration of a paper Torah in the fraternity building that was vandalized over the weekend.

The turnout, according to Rabbi Yudi Steiner, director of the Rohr Chabad at GW, was “overwhelming and full of love.”

Steiner spent time with members of the fraternity prior to the rally, saying that some students were visibly shaken by what had happened. “I told them to channel this experience into a good one. Our response will determine the end of the story. Someone came and tried to make Jewish students feel attacked; our response was to do the opposite. To parade through the streets and read the Torah aloud.”

It was a message that he shared throughout the afternoon. Outside of the Jewish fraternity and sorority houses—Zeta Beta Tau and Alpha Epsilon Pi—the crowd watched as mezuzahs were affixed to the front doors of the buildings. They also listened as a part of this week’s Torah reading was recited at Kogan Plaza on campus.

The rabbi also announced a new initiative to put up mezuzahs, which “proclaims G-d’s protection,” on every doorpost. He said that students can request one at: Gwscroll.com. 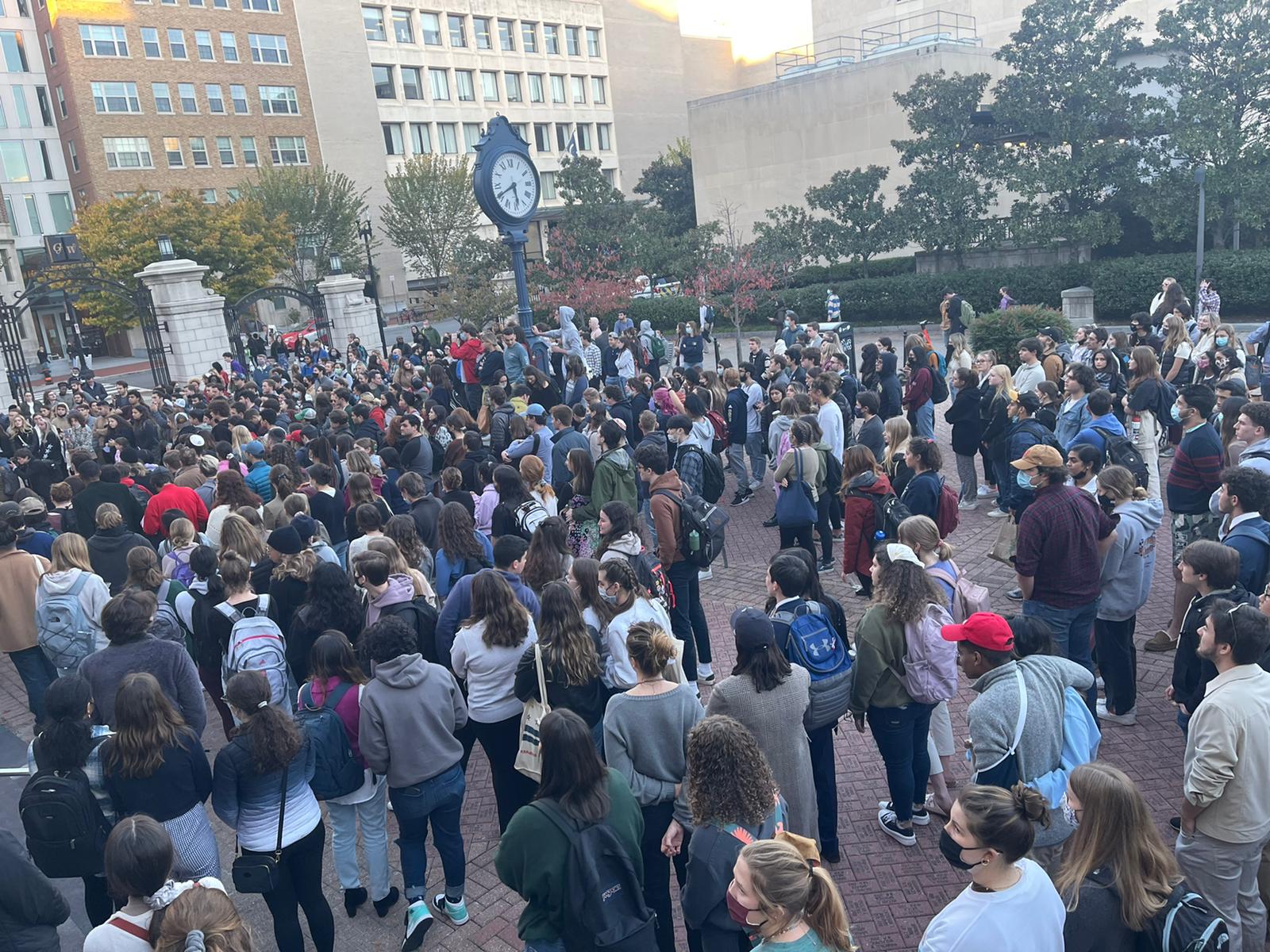 ‘Attack on Greek life has no place in society’

Several Jewish students from GW posted their thoughts and feelings about the desecration of the Torah on social media. Said one, “I have devoted years of my life to fighting anti-Semitism, following in the footsteps of my grandmother who survived the Holocaust. I am exhausted. But I am not a Jew with trembling knees.”

The national arm of the fraternity also issued a statement on Monday, saying, “Tau Kappa Epsilon is disappointed, frustrated and sickened by the crime and hate shown to our Alpha-Pi Chapter at George Washington University during a break-in over the weekend. This attack on Greek life and display of anti-Semitism has no place in our society. We take great pride in our fraternity and its commitment to supporting members of every race, religion and creed.”

TKE at GW has a sizeable Jewish membership, and reports noted that the Torah was used for swearing in new fraternity members.

Speaking to the university newspaper, The GW Hatchet, TKE president Chris Osborne said, “I think the message is clear that there’s broad support, [and] that changes need to be made on this campus for inclusivity and making people feel like they can practice their religion and creed on this campus.”

Also on Monday afternoon, the university’s president, Thomas LeBlanc, sent out a letter to the greater university community calling the desecration a “direct and serious act of hate.” He added that police have increased patrols in the area of the fraternity, and that local law enforcement is continuing to investigate.

“The safety and well-being of our community has been and will remain our foremost priority,” LeBlanc said in his letter. “I recognize that members of our community are feeling less safe on our campus after this incident, and we are taking every action to rebuild a sense of trust and safety.”

Adena Kirstein, director of GW Hillel, said “as always, I remain moved by our Jewish community at GW and motivated to continue to build vibrant Jewish life here on campus. Our students are willing to ask critical questions, exercise Jewish values and stand proudly with our community. This is the true story of Jewish GW, not an act of anti-Semitism.”